They both dedicate years of their lives and train extensively to master their sport — but unlike their Olympic counterparts, Canada’s Paralympic medalists do not receive a big payout for reaching the podium at the Games.

“Super disappointing not to get the same compensation as the Olympic athletes get,” said Lisa DeJong of Sherwood Park, who captured silver in the women’s snowboard cross at the 2022 Winter Games in Beijing.

“Obviously, we work just as hard.”

The payout came from the Canadian Olympic Committee Athlete Excellence Fund (AEF), which also provides funding of $5,000 for performances at world championships (or equivalent) during non-Olympic years, to support living, training, and competition expenses.

The funding does not extend to Paralympians.

“There’s a lot of extra expenses on the (Paralympic) side with adaptations and the CPC (Canadian Paralympic Committee), and the athletes are currently working to bring more visibility to that and change it,” DeJong said.

“It’s very expensive to travel and there’s quite limited funding in most sport programs.”

DeJong said adding more funding would be a game-changer for many parathletes.

“It’s pretty hard to train without funding. Everyone goes out and finds personal sponsors to help offset that cost,” DeJong said, adding her sponsor Siwin Foods helped her get to the Games and funded her equipment.

“I’ve been really lucky with the sponsors I’ve found throughout this journey, but it’s definitely a barrier for a lot of people that would get into competing, that aren’t able to because they don’t have the financial backing.”

Four years ago, the United States Olympic & Paralympic Committee board of directors decided to give equal payouts for medal performances to US Paralympians and Olympians, as part of an effort to direct more resources to Paralympic sports.

No such announcement has been made in Canada — yet.

“We are hoping for the Games, in four years in Italy, that it’s going to be different and it’s looking like it’s going to be,” DeJong said, explaining there have been discussions around all Canadian athletes being treated equally as well.

Paralympian-turned-Senator Chantal Petitclerc has raised the issue too. On Feb. 24 — while Olympic athletes were in the middle of returning home from China — she stood in the upper chamber and addressed Senator Marc Gold, the government representative in the Senate.

“Our 49 Paralympic athletes are nine days away from the games for which they have been training for years. When they return, we will be proud of them too. We will applaud them just as we applauded today in this chamber.

“The government will congratulate them, but will they receive a performance award? No. They will receive absolutely nothing, no matter what colour medal they win.”

Petitclerc said she has experienced the same injustice in 2008 and nothing has been fixed.

“Senator Gold, it’s easy to say that the Canadian Olympic Committee has more resources than the Paralympic Committee, but that does not justify this unequal treatment.

“Other countries have found solutions, including the United States, Italy, Singapore and many others. This is discrimination based on disability and, you will agree, that has no place in Canada.”

Gold said he was ashamed to admit he was unaware of the discrepency and would look into it.

Beijing is the second Paralympics to be held during the global pandemic. Canadian athletes faced some of the world’s biggest hurdles to get the Games, due to tight travel restrictions that limited opportunities to compete and strict lockdowns that closed training facilities.

Because of that, Canada didn’t set a medal target for Beijing. It was too tough to gauge how the team stacked up against the rest of the world.

5:33
Get inspired by the stories behind Canada’s Paralympians

Get inspired by the stories behind Canada’s Paralympians – Mar 7, 2022

DeJong, along with Tyler Turner from Campbell River, B.C, won Canada’s first-ever medals in snowboarding at the Paralympic Winter Games.

“Snowboarding, especially, is very expensive and without that extra funding, it’s just not feasible for a lot of people to compete,” DeJong said.

Like the Summer Paralympics six months earlier, the Winter Games posed unique challenges amid strict pandemic protocols that meant no friends or family members could be in attendance. All participants were tested daily, while access in the “closed loop” system was limited to hotels, venues and media centres.

The Paralympics ended a near six-week run of international sports in the Chinese capital that began with the opening of the Winter Olympics on Feb. 4.

It also ends a run for Asia of hosting four of the last eight Olympics and Paralympics, starting with the 2008 Beijing Summer Games.

The next Summer Olympics and Paralympics are in 2024 in Paris, followed by Winter Games in Milan-Cortina, Italy in 2026.

2030 Olympics: Indigenous-led bid takes next step to bring Games back to Vancouver

An Indigenous-led partnership is taking steps to explore a potential bid to bring the 2030 Winter Olympics and Paralympics back to the Vancouver area.

— With files from Lori Ewing, The Canadian Press 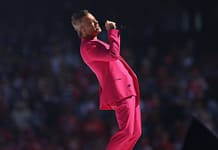