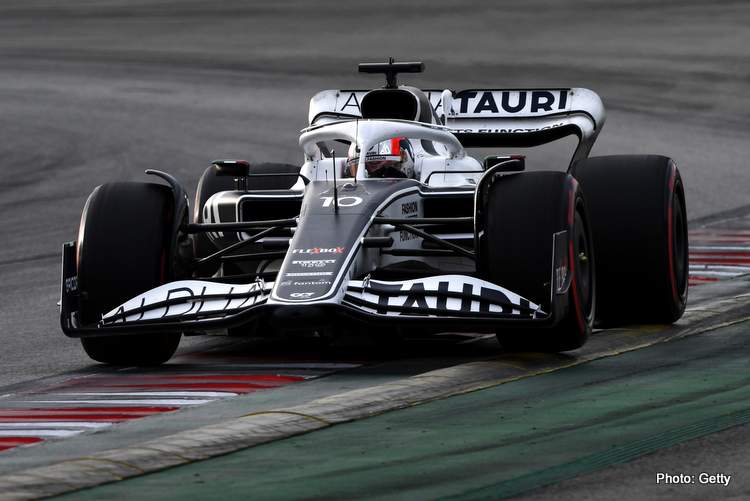 Pierre Gasly claimed that he felt confident in AlphaTauri’s AT03 straight out of the box, on the second day of Formula 1 pre-season testing at Barcelona.

Gasly has bee impressive all season long in 2021, and his first day of driving his 2022 charger was no different, as the Frenchman racked up 147 laps while finishing the day second-best in the timing screens with a lap of 1:19.918 two tenths shy of Charles Leclerc’s best time.

Gasly commented on his encouraging day at the wheel of the AT03 in the team’s media brief, saying: “I must say I am super excited to be back.

“It was good to understand a bit more about how this car works and so far, it’s been really positive. Straight out of the box, I’ve felt quite confident inside the car, and it has responded the way I wanted.

“Obviously, there’s still a lot of work to do, but it’s been a pleasing start to the year. Personally, I’m trying to focus on how the car feels when I’m driving it and what I need to do myself to improve,” Gasly explained.

“Tomorrow we will continue to explore some different directions in terms of set-up, we have some good ideas that we would like to try and I’m sure we have more performance to come.

“There’s still so many unknowns so we’ll be looking at everything tonight with the engineers and then pushing for more tomorrow,” the Frenchman concluded.

The baseline AT03 already in the right ballpark

From the technical perspective, AlphaTauri chief race engineer Jonathan Eddolls is thrilled with the progress the team has achieved, claiming that their 2022 F1 car is developing in the right direction.

“We completed another successful day of testing with the AT03 at the hands of Pierre today,” he said. “After some aero rake running first thing this morning – to characterise the mappings – we got straight into set-up work and explored a number of different directions.

“The baseline car was already in the right ballpark, but we learnt some more from the larger changes. The wind picked up over lunch and the track was slower, which combined with the harder C1 tyre made the grip and balance at the start of the afternoon more difficult than the morning.

“However, with some set-up tuning we improved this and by the time we switched to the softer tyre in the last hour Pierre was happier with the car in general. We closed the day with some pitstop practice, which is particularly pertinent for this year as the wheels are much larger and heavier than the 13” variety we have become accustomed to.

“Other than a few small niggles the car remained reliable, and this allowed the team to focus on performance,” Eddolls admitted.

“Although there remains a mountain of work to do before race one, we are making good progress and look forward to ticking off further items tomorrow, including the wet running in the afternoon,” he concluded.

ending day 02 with the most amount of laps, excellent work @PierreGASLY! 👊👏 pic.twitter.com/3kyeno0lfK