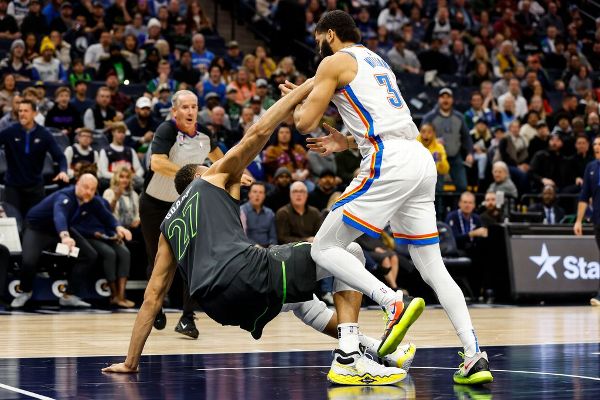 Minnesota Timberwolves center Rudy Gobert was ejected in the first half of the game Saturday against the Oklahoma City Thunder after he appeared to purposefully trip Kenrich Williams.

Gobert contested Williams on a drive to the rim with 9:22 to go in the second quarter, causing Williams to fall to the ground. Gobert tripped over Williams and while down on the court appeared to sweep a leg out in an attempt to trip Williams when the Thunder forward was attempting to get up.

A brief scuffle ensued, after which Gobert was assessed a flagrant foul 2 and ejected. Williams received a technical foul.

Gobert finished the night with six points and four rebounds in nine minutes.

The Timberwolves are already shorthanded in the frontcourt, with All-Star forward Karl-Anthony Towns sidelined indefinitely with a calf injury.