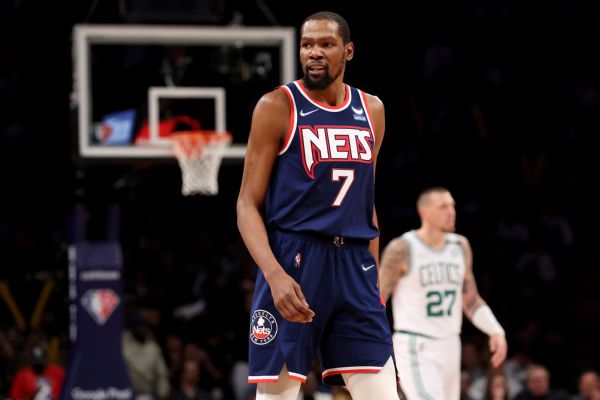 The Celtics appear no closer to acquiring Durant than others in discussions with the Nets, but Boston’s ability to include All-Star forward Jaylen Brown as a centerpiece in offers does help to make the team formidable in its pursuit, sources said.

The Miami Heat, Phoenix Suns and Toronto Raptors have been well-known in their varying degrees of interest in Durant, but the Celtics have also been in regular contact with the Nets, sources said.

There are no deals believed to have traction for Durant, and no team has yet to reach the significant threshold that the Nets have set to trade one of the league’s most talented players, sources said. The Nets’ posture on a potential trade has been largely unchanged: They want a massive return that potentially includes multiple unprotected first-round picks, pick swaps and impactful players for Durant, sources said.

The Celtics consider All-NBA forward Jayson Tatum off limits in any trade talks, but Boston is able to construct a package for Durant that could include Brown and as many as three unprotected first-round picks (2025, 2027 and 2029) — and two pick swaps (2024 and 2026). Brown, 25, has two years and $56 million left on his current contract.

Durant, a 12-time All-Star and two-time NBA Finals MVP, asked for a trade on June 30, and hasn’t backed off that request. At 33 years old, Durant has four years and $198 million left on his contract, which means Brooklyn can be patient with waiting out teams for the kind of return it believes will eventually emerge for one of the few players to ever reach the trade market in his prime.

The Celtics defeated the Nets 4-0 in an Eastern Conference first-round playoff series last season, and built the core of their current team, in part, from the draft compensation from a 2013 trade that sent Kevin Garnett and Paul Pierce to the Nets. Both Tatum and Brown were acquired based upon Brooklyn picks delivered to Boston.