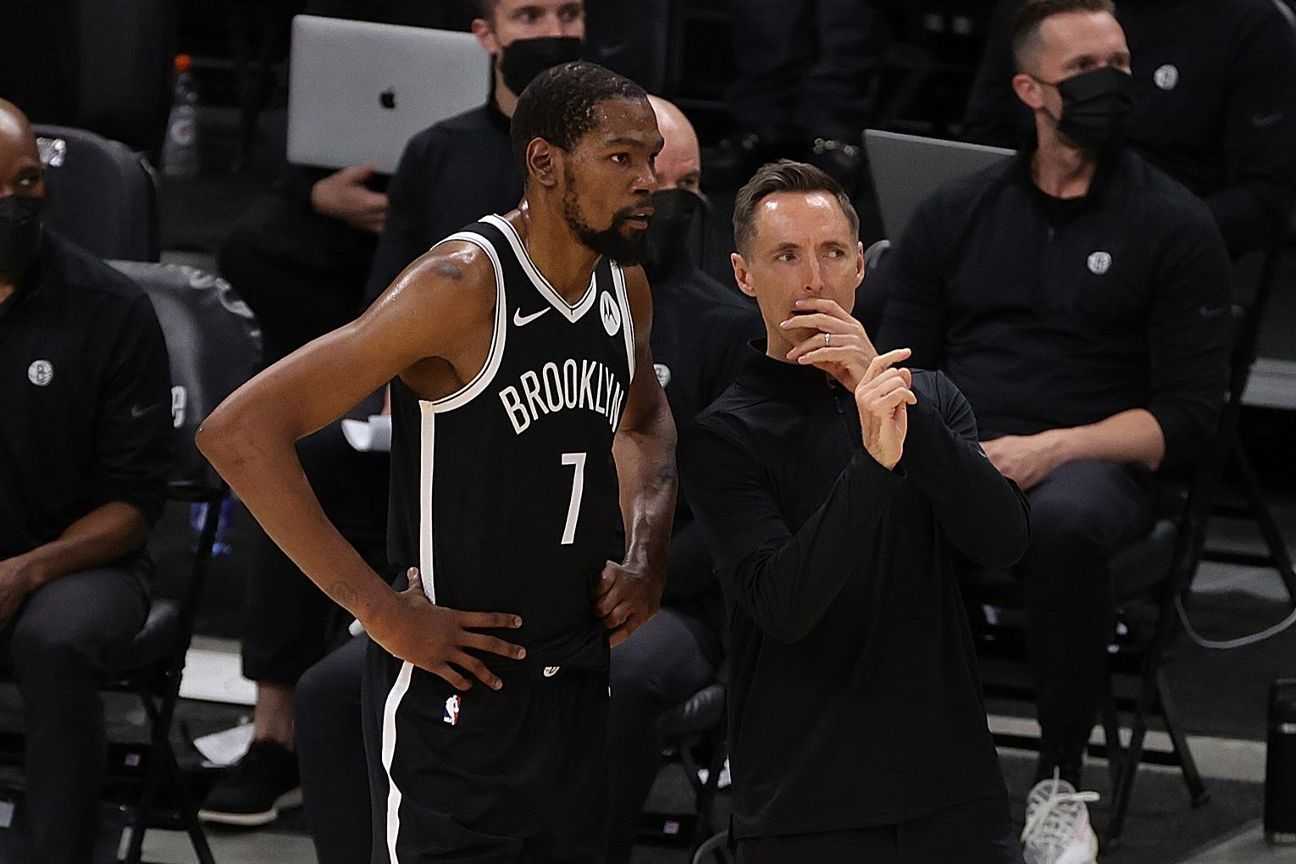 NEW YORK — Brooklyn Nets coach Steve Nash wants to make it clear that his relationship with star forward Kevin Durant is good heading into the start of the 2022-23 season.

That statement comes following a tumultuous summer for the organization in which Durant asked for a trade, then asked for Nash and GM Sean Marks to be fired.

“We’re fine,” Nash said after the Nets’ first official practice of the season on Tuesday. “We’re good. Ever since we talked, it’s been like nothing’s changed. I have a long history with Kevin. I love the guy. Families have issues. We had a moment and it’s behind us. That’s what happens. It’s a common situation in the league.

“We all were hurting, seething, to go through what we went through last year, not being able to overcome all that adversity. Sometimes you lose perspective because you expect to win, but the reality is we were able to talk and discuss what we can improve on from last year. And also keep perspective. We went through a ton of stuff.”

Nash, who developed a bond with Durant during their shared time with the Golden State Warriors, pushed back on reports that the star asked for him to be fired.

Nash said the air was cleared during an August meeting with Durant, Marks and Nets owners Joe Tsai and Clara Wu Tsai in Los Angeles. At the time, Marks issued a statement saying the Nets wanted to “move forward” with Durant, who still has four years remaining on a max contract he signed last year.

Nash declined to specify what he said to Durant that helped clear the air.

“That’s a private conversation, so I’m not going to get into it,” Nash said. “But it was an opportunity for us to just clear the air and communicate. It was pretty straightforward, it didn’t take a lot of time, and we got to the bottom of it and decided to move forward.”

Nash said he wasn’t bothered by the speculation that, at times, seemed to consume the basketball world over the summer regarding his team — and his star player.

“Knowing Kevin as long as I have, it didn’t really bother me the way maybe everyone would think,” Nash said. “That’s a part of being a competitor. I wasn’t overly surprised and I wasn’t even overly concerned. This is something that I thought we would address in time and we did and here we are and we’re looking forward.

“I think there’s something in this that we can all grow from as well. Sometimes when things like that happen, the outside world makes a big deal of it, from the inside we take it as an opportunity for growth.”

Nash wanted to keep the focus on the Nets’ future instead of rehashing the drama of this past summer.

“I think we’re in a really good position to start the season,” Nash said. “And regardless of the way everyone wants to talk about drama all the time, we’ve been through this. I played in the league for 17, 18 years. I’m in here now, Year [as coach], seen it all, done it all. It does not impact me the way maybe it impacts people on the street or in the media, so it was never really as a big a deal to me.

“I always thought we’d have our moment, we’d discuss it and we would choose a course and we’re fortunate to all be in the gym working together again and excited. I think the energy’s been outstanding.”

Aside from the notion that he felt any perceived issues with Durant were overblown, Nash remains steadfast in his belief that they will stay on the same page because of his feeling that there isn’t as much tension behind the scenes as there was at the end of last season.

“You don’t start the year thinking you’re going to go through the same amount of adversity as we have the last two years,” Nash said. “So that was the major ingredient in all this was that we have expectations, we have competitors, and we just faced too much to overcome last year.”

One of the other reasons Nash and the Nets are feeling optimistic at the start of camp is because Ben Simmons is a full participant after missing all of last season because of back surgery and mental health concerns.

“Ben looked great,” Nash said. “Ben’s been doing really well. He’s put in the time this summer and he’s continually getting better every week so it looks to me like he’s pretty close to the player we envisioned and he’s going to make a big impact for us.”