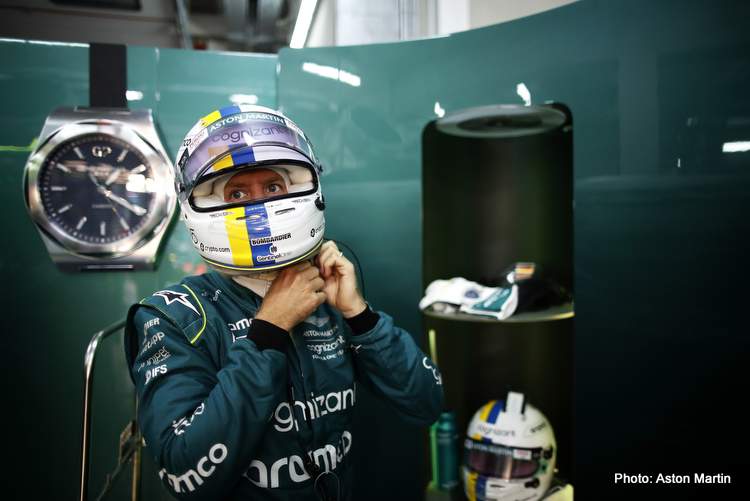 Sebastian Vettel played down rumors that he might be planning to rejoin Red Bull on Friday at Imola, revealing he hasn’t spoke to Christian Horner for a while.

The four-time Formula 1 World Champion won all his titles as a Red Bull driver, and after a six-year-spell with Ferrari that ended acrimoniously in 2020, joined Aston Martin where he remains, for now.

Aston Martin have been struggling massively at the start of the era of the new ground-effect F1 cars, with the team’s AMR22 woefully off the pace, which put Vettel’s motivation in the spotlight, as many questioned his will to see his contract with team through, and rumors claiming he may be set to rejoin Red Bull.

Asked about the Red Bull rumors at Imola, Vettel told the media: “I haven’t spoken with Christian for a while. I don’t know. So, not true. I don’t know, I mean, time will tell.

“At the minute I think the focus is on the now and on a mountain ahead of us that we try to climb, and we won’t climb it in the day, we won’t climate in the month, but we will choose the path that we climb, which will determine the next three to four years,” the German said of the tough situation his current team is enduring.

“So that’s why I feel it’s really important to focus on that. And it takes all the attention. And then, I don’t know, one day there will be a day for all of us where this journey ends and some other journey will start, whatever that might be,” Vettel mused.

Red Bull consultant Helmut Marko reflected on the situation of his former protégé, who he believes will at least see this season out with Aston Martin, despite the rumors.

“Basically, quitting in the middle of the season doesn’t suit the strong character that Sebastian is,” Marko told Germany’s F1-Insider.

“But there would have to be an improvement from the team soon, otherwise it will become increasingly difficult to stay motivated.

“In any case, it hurts my soul to see a four-time World Champion in such a situation,” the Austrian lamented.

Some hope for Vettel at Imola

In the midst of all the negativity surrounding him, Vettel was able to pull out a decent result in qualifying for the Sprint Race at Imola on Friday, as he made the best out of mixed dry and wet conditions to make it into Q3, putting his Aston Martin ninth by the end of the session.

The 34-year-old said in his team’s post session review: “I am pleased with the job we did today. It was my first time in Q3 in 2022 and the first time this year for both cars in Q2, which is a great effort by the team.

“It took a while to get comfortable, but by the first run of Q2 I was pretty happy,” he admitted.

“In Q3, I only had one clean lap. On the second attempt, I braked late and ran wide in Turn Two, and then it was all red flags from there.

“It is a shame it ended in a bit of an anticlimax, but we should be able to have a good weekend from here,” the winner of 53 grands prix concluded.

His teammate boss Mike Krack added: “Starting ninth for tomorrow’s Sprint is a good achievement for Sebastian and a highly encouraging result for the entire team after our misfortunes in recent events.

“Sebastian had been right in the thick of it all afternoon. He reacted brilliantly to the changing conditions, setting competitive times in both Q1 and Q2, and was all set to challenge for a higher position before his progress was stalled by the multiple Q3 red flags,” he explained.

“Finally, I want to say ‘well done’ and ‘thank you’ to the team here in Imola and the support back at Silverstone. Adapting to an evolving racetrack in changing conditions is never easy, but it is the sort of challenge that brings out the best in people.

“Everyone did a fantastic job today. We go into tomorrow’s Sprint feeling positive,” Krack concluded.

A hectic qualifying session comes to a close.