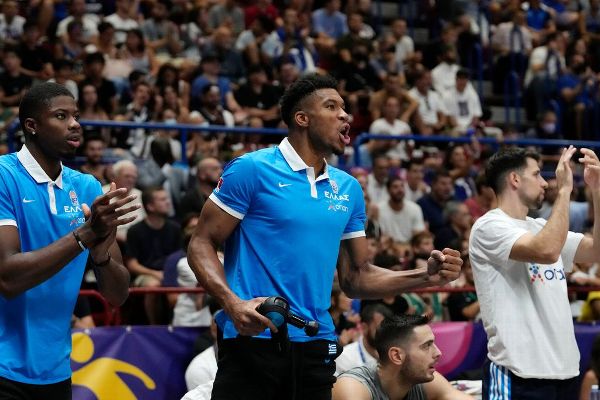 MILAN — Giannis Antetokounmpo was held out of Greece’s 93-77 win over Great Britain in Monday’s EuroBasket game because of knee pain.

“He had discomfort in his knee but nothing major,” Greece head coach Dimitris Itoudis said at his postgame news conference, adding, “We did not want to risk anything so we did not dress him up today.”

Greece improved to 3-0 in pool play after the win, guaranteeing themselves a spot in the knockout phase of the tournament, which begins Saturday in Berlin.

Before missing today’s game, Antetokounmpo led the Greek squad to hard-fought wins over Croatia and Italy. Itoudis said that he expects Antetokounmpo to return to action Tuesday against Ukraine.

Kostas Papanikolaou and Michail Lountzis each had 10 for Greece, which is now assured of a top-four place in the group. There are four groups with six teams in each at EuroBasket, with the top four finishers in each group headed to the knockout stage.

The Associated Press contributed to this report.