THE LOWDOWN
Arsenal travel to Juventus in the Champions League on Thursday night on the back of their first defeat since March. Truth be told, they deserved their defeat against Manchester United on Saturday and some of the principle reasons for that loss, namely the loss of key players from the spine of the team, are not going away just yet.

In fact, the Gunners injury woes have been added to by the news that Beth Mead has ruptured her anterior cruciate ligament and will be out for the rest of the season and, sadly for Beth, that almost certainly rules her out of the World Cup next summer. It’s a cruel blow for the player and it’s a blow for Arsenal too, whose squad is already depleted by injury.

In the meantime, a patched up squad is going to have to get on with it in Turin, where they will come face-to-face with former boss Joe Montemurro. A win would put Jonas Eidevall’s team on the brink of qualification for the knockout rounds with three games still to play. A return of four points from this double header with Juve would put them in a strong position to win the group.

Not least because Juve and Lyon took points off one another on match day four. But it will not be an easy assignment, Juventus qualified ahead of Chelsea in last year’s group stage in a group also containing Wolfsburg. They may not be having a vintage Serie A season so far but away from home, with a depleted side, a draw would not be a terrible result for the Gunners.

TEAM NEWS
Beth Mead is out for the rest of the season with an ACL injury, while Kim Little is out until the New Year with an MCL injury and Lina Hurtig (hamstring) is also unavailable to face her former club. Leah Williamson and Rafaelle are still out with foot injuries, while Teyah Goldie is still out with her own ACL injury obtained in March.

A WORD FROM THE BOSS
Juventus is a very strong team, as a club they have shown that consistently in the Champions League over the last couple of seasons that they can compete with any club in Europe. They have been doing that very well so we have lots of respect for them. We understand and are very aware that it will take a very good performance from us to get a result.

Football is fast in both directions, when you win and when you lose. We want to have a totally different performance, as a team, than we had against Manchester United, that is the most important thing for us and it’s an excellent opportunity to get that right against Juventus.

LAST TIME OUT
The teams have never met competitively but did play a friendly in the summer of 2018 at Meadow Park, which Arsenal won 5-0 with goals from Kim Little and a quartet from Vivianne Miedema.

THE OPPOSITION
Juventus formed in 2017 when they bought the rights to take over existing Italian women’s team Cuneo. They have dominated Serie A ever since, winning every Serie A title since their formation, as well as a pair of Coppa Italias. The next part of their project has been to build a sense of progress in European competition and last season they really saw the fruits of that.

Qualifying ahead of Chelsea in a group that contained Wolfsburg was no mean feat. They were knocked out in the quarter-finals by eventual winners Lyon but it was a close tie, with the French side winning 4-3 on aggregate. This season has not been as smooth sailing for Juve, who currently trail Roma by four points at the top of the table.

On Saturday, they squeezed past Parma 2-1 with a pair of stoppage time goals and have been held by the likes of Sassuolo and Inter and they have lost to AC Milan. However, with the guts of the Italian national team and big names like Lineth Beerensteyn and Sara Bjork Gunnarsdottir, they pose plenty of threat.

With Beth Mead and Lina Hurtig unavailable, Arsenal are likely to start Noelle Maritz at left-back and push Katie McCabe into an advanced position. She has played as an inverted right winger on occasion this season prior to the defensive injuries which have meant that she has been needed exclusively at left-back.

The Gunners are light on options in those wide roles and it is not a huge leap of imagination to suggest that fatigue might have been a contributing factor to Beth Mead’s awkward landing on Saturday evening, leading to her ACL injury. But Arsenal have no choice but to crack on and it’s likely they will do so with McCabe on the right-wing.

She has played there to great effect, under Juve boss Joe Montemurro who often fielded McCabe in that position during the 2018-19 title winning season. Over the last four seasons, the names with the most minutes played look exactly the same: Little, Mead, McCabe. Two of those players are now injured and McCabe has plenty of responsibility as a mainstay of the team and possibly in a position she hasn’t played in very often for the last few seasons. 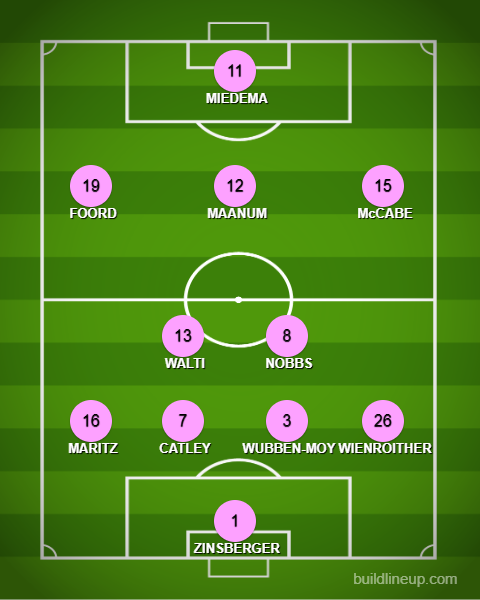 HOW TO CATCH THE GAME
The game takes place at Juventus’ Allianz Arena and kicks off at 8pm UK time. The match will be shown live on DAZN’s YouTube channel, free of charge and not geo-blocked. No subscription is required to view.

COMING UP
We will have a video diary from Turin with all the build-up and fallout from the game, as well as the usual post-match reaction from Jonas Eidevall on the site on Thursday evening, we will speak to a player in the wake of the game too.