THE LOWDOWN
Arsenal can take a giant stride towards the UWCL Quarter-Finals if they can beat Juventus at Emirates Stadium on Wednesday evening. Victory over the Italians would give the Gunners a five point cushion over Joe Montemurro’s side with two group games to go, one of those against Zurich against whom they would be big favourites.

However, Jonas Eidevall and the squad won’t want to get too ahead of themselves, they play Juventus and Lyon back-to-back at Emirates Stadium and both of those will be incredibly difficult matches. Arsenal left Turin with a point a fortnight ago but really had the chances to take all three, as with Saturday against Everton, Vivianne Miedema’s goal was scant representation of their efforts.

The point in Turin was acceptable but it only becomes a good result if Arsenal can take the points in London. Juventus carry plenty of threat on the counter, especially in wide areas with Lineth Beerensteyn and Barbara Bonansea, Arsenal created more than enough opportunities in the first match to provide encouragement here.

Arsenal’s squad is also bolstered by the return of Leah Williamson and Rafaelle from injury and, if nothing else, it gives Jonas Eidevall greater optionality from the subs bench. In Italy, Arsenal’s subs on the night were both made in the back four. The return of two centre-halves gives them a little more wiggle room to use Katie McCabe and Steph Catley in more enterprising positions.

TEAM NEWS
Leah Williamson and Rafaelle are in contention to start this game having both been named on the bench for the 1-0 victory over Everton on Saturday. Lina Hurtig (hamstrong) is unavailable, with Kim Little (knee) out until the New Year. Beth Mead (ACL) is out until next season and Teyah Goldie is in the latter stages of recuperation from an ACL injury picked up in March.

A WORD FROM THE BOSS
“Everton was a good game because the way Everton play required our full focus, in order to deal with their different formations, that was good. There are similarities between Everton and Juventus and we use that in preparation, there are things we have prepared we can use for both teams. The wide players for Juventus, Beerensteyn and Bonansea, are very skilful players. They are very fast in transition and we saw that with their goal.

“Beerenesteyn is a top international player, her pace and movements in the final third is of an extremely high level and she has shown that over many years both in the Dutch National Team and at Bayern Munich and now Juventus. It doesn’t come as a surprise and it’s definitely one of the big threats we will have to handle in this game.”

LAST TIME OUT
The teams drew 1-1 at the Allianz Stadium a fortnight ago, Lineth Beerensteyn gave Juve a second half lead only for her international teammate Vivianne Miedema to head home an equaliser.

THE OPPOSITION
After a poor 0-0 draw with lowly Sassuolo and a victory against bottom of the table Parma that required two injury time goals to avoid a shock defeat, Juve got their league form back on track with a big win against fourth placed Inter Milan this weekend. This coming weekend they face league leaders Roma in an even bigger test in Serie A.

Juve have won the title in each of the five seasons that they have existed, this season AS Roma are intent on changing that. In Champions League terms, Juve are still unbeaten in the group having drawn with Arsenal and Lyon. A victory in London would put them in a very commanding position to qualify from the group.

Juve are a very dangerous counter-attacking team with Bonansea and Beerensteyn on the flanks, the latter caused Arsenal a lot of problems in the first leg. Jonas Eidevall explained post-match that he started Frida Maanum in a deeper position in Italy specifically because of the way Juventus overload the wide areas.

Katie McCabe started the Everton game as an inverted right-winger, I would expect that to be the case again against Juventus. Jonas Eidevall said he wanted Katie in an advanced position against Everton to help pin back their dangerous wide players like Jess Park. Juventus are a similar team to Everton as a counter-attacking side with lots of craft on the wings.

McCabe obviously plays the role very differently to Beth Mead, as a left-footer she looks to come inside and behave more like a playmaker. In doing that, though, Vivianne Miedema has been able to push into more advanced positions and has goals in each of her last two games. Arsenal are slightly recalibrating on the right in the absence of Kim Little and Beth Mead and the team adjusting to McCabe’s movements there, as much as vice versa, will be crucial in this game. 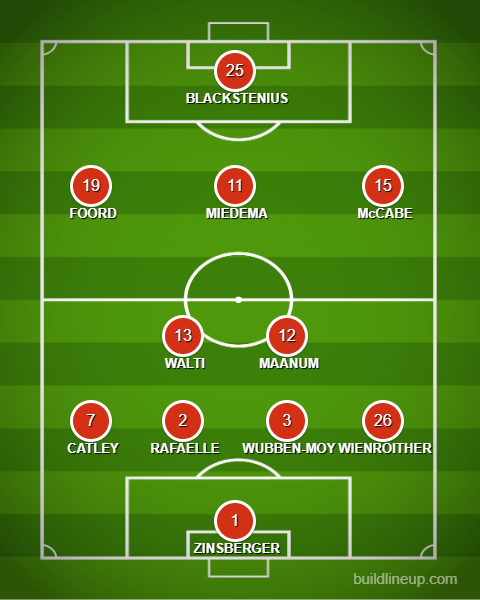 HOW TO CATCH THE GAME
The game takes place at Emirates Stadium on Wednesday at 8pm and will be streamed live on DAZN’s YouTube channel for free and not geoblocked.

COMING UP
We will have match reaction from Jonas Eidevall on the site on Wednesday evening, we’ll also have an Arsenal Women Arsecast previewing next week’s clash with Lyon available early next week.