Keeping her promise to the people of Costa Rica that both the IBF and WBO Minimumweight Female World Titles were to stay in the country, Yokasta “Yoka” Valle (26-2, 9 KOs) made a historic statement by winning via unanimous decision against now former WBO Minimumweight World Champion Thi Thu Nhi Nguyen (5-1, 1 KOs) of Ho Chi Minh City, Vietnam in a 10-round World Championship match. 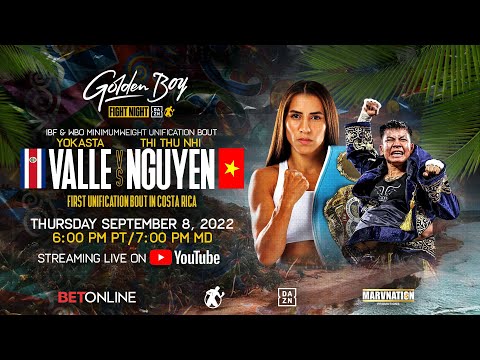 “The belts stayed here! I’m after the next belt, whichever comes first. It’s a dream. I want to unify all the titles one day and we are one step closer,” said World Champion Yokasta Valle. “I knew it was going to be a hard fight. Nguyen was a really tough fighter in there and could withstand a lot of my combinations. There were hard moments in the ring but I knew I would get the victory because I trained hard and had an incredible corner.”

The co-main event also featured tremendous female boxing talent, as Adelaida “La Cobra” Ruiz (12-0, 6 KOs) of Lynwood, CA captured the WBC Interim Super Flyweight Title from Mexico City’s Sonia Osorio (15-7-3, 2 KOs) in a rematch that went the distance. The 10-round fight had Ruiz in control for much of the match, Ruiz kicking off the combat with rocking Osorio in the opening round.

“I feel ecstatic. I am speechless,” said Adelaida Ruiz. “I always read those silly quotes about how a small step is always a step closer to your dreams – and here I am living it. Nothing comes easy. I worked my tail off. But here I am living my dream.”

Jose “Superman” Garcia (16-1-1, 15 KOs) of Mexico City, Mexico made a statement with a second-round knockout against Israel Lopez (9-3, 7 KOs) of Tipitapa, Nicaragua in a scheduled 10-round super lightweight bout. Hall of Famer and former World Champion, Marco Antonio Barrera, was in his corner for the fight, and Garcia showed off his left hook which was responsible for sending Lopez to the mat twice in the second round. The referee called the fight at 2:06, awarding Garcia the vacant WBO World Youth Super Lightweight Title.

“I feel very happy to have secured this belt,” said Jose Garcia. “It’s a step closer to my dream. I have been working very hard and have been very disciplined since I was a teenager to achieve this.”

In a scheduled 4-round welterweight fight, Escazu, Costa Rica’s Lorenzo Garro (4-0, 2 KO) stopped Kyle “The Cobra” Erwin (5-1, 2 Kos) of Oceanside, CA in the second round via TKO at 1:40. The fight was called a TKO due to Erwin sustaining a cut over his right eye.

Kickstarting the night with war, Escazu, Costa Rica’s Kelling Fonseca (4-5, 2 KOs) secured a split decision win over Ensenada, Mexico’s Jose Alvarado (9-1, 5 KOs) in a 6-round super lightweight match up. Alvarado was deducted a point in the third round for head-butting.

Golden Boy Fight Night on DAZN: Valle vs. Nguyen was presented by Golden Boy in association with Marvnation. The 10-round minimumweight event is sponsored by “BetOnline – Your Online Sportsbook Experts.” The fight took place on Thursday, September 8 at Ciudad Deportiva Heiner Ugalde, Hatillo, San José, Costa Rica, and was streamed live worldwide on DAZN and the Golden Boy Boxing Youtube Channel.