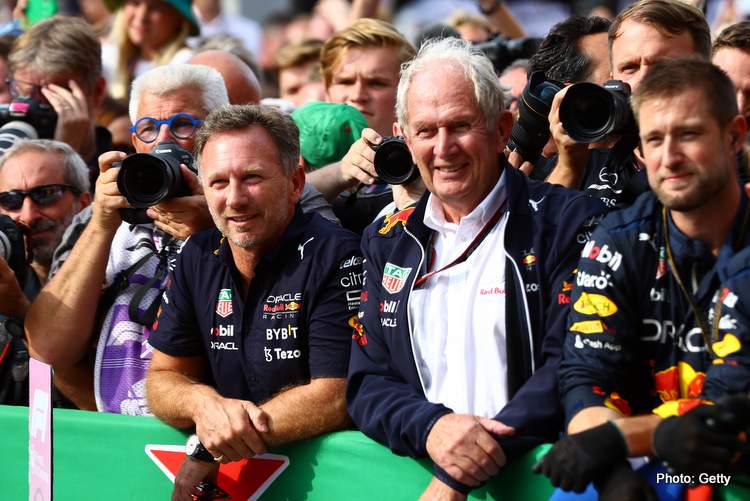 Christian Horner was in such a good mood after Max Verstappen won the 2022 Dutch Grand Prix, that he admitted for first time Championship was Red Bull’s to lose.

One cannot blame Horner for letting down his guard, and speaking sincerely instead of the PR approved statements about it being too soon to talk about Championships, or taking anything for granted and what have you.

After winning his fourth race in a row, his tenth of the season, Max Verstappen now has a 109 lead over Charles Leclerc with only seven races remaining, as Red Bull lead Ferrari by 135 points in the Constructors’.

And it wasn’t straight forward for Verstappen to win his home race with some challenge from Mercedes, as well as Virtual Safety Car and Safety Car periods all making it a bit complicated to secure the win.

Nevertheless, it was the perfect weekend, with pole position, race win, fastest lap point, and driver of the day all bagged by the reigning Formula 1 Champion.

Red Bull in a great position

“We’re in a great position,” Horner was quoted saying by F1’s official website after the race, as he reflected on yet another dominant Verstappen/Red Bull performance.

“And we probably have to try quite hard to lose it,” he understandably said of the Championship. “But mathematically, nothing is done until it’s done.

“Our approach is as it’s always been, go one race at a time. Next race, next Sunday, same effort. We don’t allow ourselves to think too far ahead,” the Briton said holding back on excitement a bit.

Horner was full of praise for Verstappen who absorbed and controlled all the pressure and expectation of his home race in front of his passionate fans.

“What really impressed me this weekend was… it’s madness here,” he said, “And Max, he was in the zone from the moment he arrived to the moment he saw the chequered flag.

“That was a massively tough race with the Virtual Safety Car to Safety Car; it was a matter of making the right calls at the right time,” the Red Bull boss revealed. “Particularly that last one, to pit Max from the lead, put him behind what would have been two Mercedes – but for us it was crucial to put him on the right tyre and it worked out beautifully in the end.

“I thought [Mercedes would] keep George [Russell] out as a sort of a rear-gunner to try and hold Max back but then when they pitted George it gave Max a free run at Lewis.

“Obviously, there was a tyre off-set and Max got the job done very quickly,” Horner pointed out.

The Constructors’ Championship eluded Red Bull last year, which is something the team plans to make right this season.

“The constructors’, that’s team versus team and that’s been dominated by next door [Mercedes] for the last eight years. If we manage to bring that one home, that for us is as big as the drivers’ this year,” Horner admitted.

Next up in Ferrari’s home race at Monza next weekend, where Red Bull are expected to be strong like they were at Spa with their efficient RB18, unless the Scuderia find an ace up their sleeve.