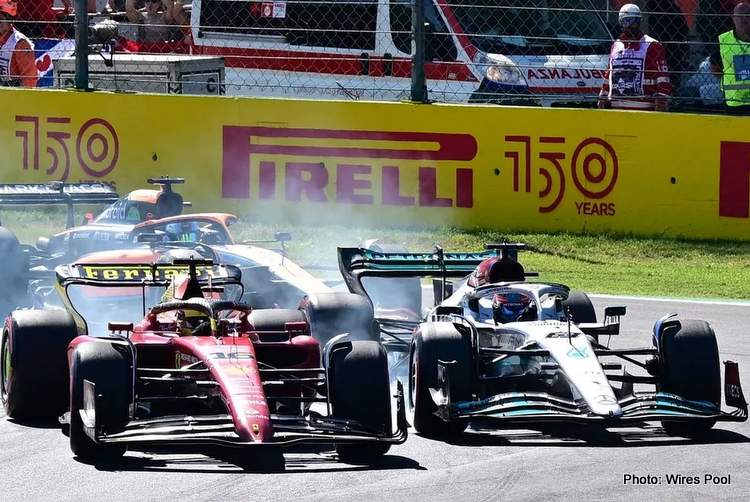 Toto Wolff believes the fight between Mercedes and Ferrari for second in the Formula 1 Constructors’ Championship is still on after George Russell finished third at the 2022 Italian Grand Prix.

Mercedes finished the race at Monza third and fifth with George Russell and Lewis Hamilton respectively, as Ferrari’s Charles Leclerc was second while Carlos Sainz was fourth.

As a result, Mercedes now trails Ferrari in the Constructors’ Standings by 35 points only, with six races remaining, as Toto Wolff believes his team still has a chance to secure the runner up position.

Reflecting on Sunday’s race at the Temple of Speed, Wolff told Sky Sports F1: “You can see on the tracks that don’t suit us we are clearly third on the road, so P3 and P5 is probably the maximum.

“It’s all to play against Ferrari, we just need to do the best every single weekend. It would [soften the blow] of this year’s car, a bit,” he added.

The race directors followed the rules

Asked about how the race was finished behind the Safety Car, Wolff said: “The race directors are always going to be under criticism but I think this time they followed the rules, maybe they could have done it a lap sooner, and they accepted the race ends under the Safety Car.

“This is how it should be,” he insisted.

Later in Mercedes’ post race report, Wolff delved into the details of his team’s race saying: “We were clearly the third fastest team today, so third and fifth positions was probably the maximum we could expect.

“Although the gaps were not as big as in Spa, this was clearly a track that didn’t suit us, so it was a question of maximising our result and doing damage limitation with Lewis.

Mercedes’ target 30 seconds up the road

“It was enjoyable to watch him fight through the pack – he looked a little bit stuck at the beginning, then once the tyres came together, he was very quick,” the Austrian noted. “As for George, he did everything we asked of him, and it was another faultless drive.”

“Looking at the championship, we are 35 points behind with six races to go and we just need to do our best every single week and see where we land after Abu Dhabi,” he said of the fight with Ferrari. “But we also know that our ultimate target was 30 seconds up the road today, and that is the real gap we need to catch up.”

Wolff didn’t forget Nyck de Vries, and the impressive job he did substituting for Alex Albon at Williams, where he finished ninth and scored two points and was voted Driver of the Day despite receiving a reprimand for some erratic driving behind the Safety Car towards the end of the race.

“He did the absolute maximum today, jumping into a car he had barely driven in FP3, then scoring two points. It showed exactly what he is capable of,” the Austrian said of the Dutchman’s performance.