The block of five games prior to the first international break of the season were always going to have a “make or break” feel to them from an Arsenal perspective. Three WSL games and a tough pair of Champions League qualifiers against Ajax provided a challenging September. Of course, the opening WSL match away at Manchester City was postponed in the light of the death of Queen Elizabeth II shaving Arsenal’s challenge from three WSL games to two.

They won both of their league games, as you would expect from home fixtures against Brighton and Spurs (both by four goals to nil). The latter was played in front of a WSL record 47,000 crowd at Emirates Stadium which is another significant milestone in the growth of this team- albeit a cerebral milestone. They defeated Ajax 3-2 on aggregate to qualify for the UWCL group stage too. Here are some themes that have emerged from an intense opening four games.

Stability
Arsenal were the only WSL club not to start with a summer signing on the opening weekend of the season- as indeed they haven’t in three of their four games so far. Back-up goalkeeper Kaylan Mackerse has yet to see action while Swedish forward Lina Hurtig started the first leg against Ajax but has otherwise started on the bench.

Last year, Arsenal had a huge upheaval with nine new players joining over the course of the two transfer windows and a new coach onboarding too. This summer, the emphasis was on stability with new contracts for Lotte Wubben-Moy, Jen Beattie, Steph Catley, Vivianne Miedema, Noelle Maritz and Caitlin Foord since April.

Thus far, the value of that stability has been apparent, with Chelsea experimenting with a new formation on the opening day of the season and losing at Liverpool and a Manchester City side undergoing a big player churn also losing at Aston Villa. Now, there is not enough evidence yet to suggest that this theme will continue across the entire season.

In the summer of 2021, Chelsea only really brought Lauren James into the squad and that sense of stability helped them en route to the league title. Arsenal have also not switched their line-up very much in the opening four games, only 14 players have started a game. Frida Maanum has played 26 minutes, Jordan Nobbs 36, Lotte Wubben-Moy has 66 largely thanks to a first half injury to Rafaelle in Amsterdam on Wednesday. Mana Iwabuchi hasn’t kicked a ball in anger yet.

As the Champions League group stages kick in, these players should see more football. I asked Jonas Eidevall about this on Wednesday in the Netherlands and he responded, “Now we need to integrate more players on the pitch over the coming months, those players will get their chance.” Arsenal have not rotated the team very much at all since around March, how Jonas Eidevall copes with that in the winter will be interesting but Maanum, Nobbs and Iwabuchi are hardly rookies or players we should worry about seeing in the starting line-up. 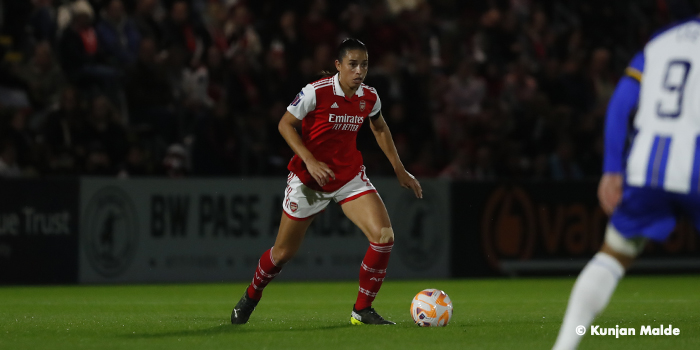 While the personnel has been pretty stable compared to last season, the defence has seen the biggest shift compared to the spring. Leah Williamson remains a bona fide starter, of course. Steph Catley started 11 of the last 13 games last season at left-back (she was rested for Coventry United in the FA Cup) and she has started three of Arsenal’s four games this season, the opening game just after she had recovered from an injury provides the only exception.

Catley is firmly the first choice left-back for the moment and Leah Williamson’s place as a starter is even less a surprise. One player we didn’t see much of last season was January signing Rafaelle, who missed the last ten matches of the season with injury. She has come in this season and really added to the team with her aggressive defensive style, her ability to dribble through pressure and her goal threat (she had eight shots- one a goal- across her first three games).

The Brazilian went off with an injury in Amsterdam so we will have to see how long she is out for. Lotte Wubben-Moy played in the final six games of last season and the Gunners didn’t concede a goal, so the calibre of the replacement is high. However, the biggest change has been at right-back with January signing Laura Wienroither seemingly nudging ahead of Noelle Maritz as first choice.

Jonas Eidevall has been keen to play up the importance of rotation in the position. When Wienroither joined in January, Eidevall told me he felt the competition would bring the best from Maritz, “She had to pace herself during the tight schedule. So hopefully we can push her harder now and we understand that if you are tired, someone else can come in and play and do the same job.” 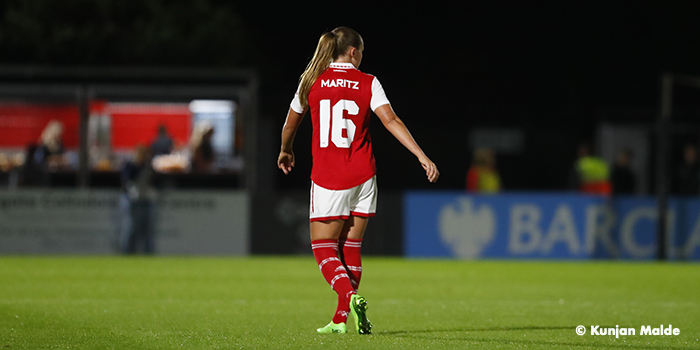 Last week, he re-emphasised the importance of competition in the position and hinted that Wienroither was ready for an increased role, “We have a similar situation at left-back with Steph Catley and Katie McCabe. They’re not the exact same type of player, they have different qualities like Noelle and Laura, so of course, sometimes that quality of a player might fit the opponent with the style you want to play, but it’s also (about) competition.

“I believe competition brings out the best in people long-term. When you are practising with a lion behind your back, that will give you the last 2%.” So far, Wienroither has played 75% of the minutes with 25% going to Maritz, which is a shift from last season. The Austrian enjoyed a very strong showing with her country at this summer’s Euros. It’s another area to keep an eye on in the coming months.

Katie McCabe on the right 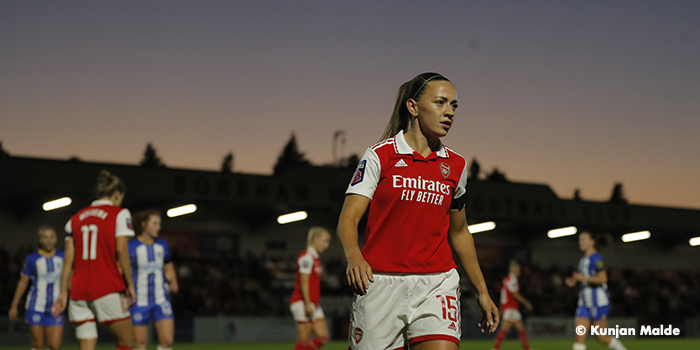 With Steph Catley nailing down the left-back spot and Lina Hurtig joining this summer, principally to play on the left, one might have wondered two things. 1- What is the contingency for Beth Mead on the right wing? And 2- what might this mean for Katie McCabe’s minutes across the season? In all four games so far, we have seen Katie McCabe play from the right during different periods.

In Amsterdam, Eidevall started with McCabe on the right-wing, something we didn’t see last season. Though Caitlin Foord and Tobin Heath are right-footers who play on the left, neither is an “inverted winger.” Both still specialise in attacking full-backs on the outside. The emphasis during Jonas’ inaugural season was for the wide players to stay wide and stretch teams. McCabe coming into the rotation as a right-winger represents a shift in style.

We have seen the Irish captain play there plenty of times under Joe Montemurro, where her ability to come in on her left-foot and shoot was seen as an asset. I am not sure whether the addition of Wienroither at right-back is seen as an avenue to accommodate an inverted winger on that flank. We haven’t seen enough of McCabe on the right to properly theorise the shift there but it’s another development to keep an eye on.

Coping with more intense opponents
At the end of 2021-22, Jonas Eidevall spoke about his desire to pit his team into training sessions and practice matches with Arsenal’s U-15 boys’ side, which they managed to do at the end of August. Last season, the Gunners struggled with the man-marking approach of Hoffenheim (away), Wolfsburg and Barcelona in Europe. The video below explains the idea of playing boys’ teams in detail so I will not rehash it here.

Being drawn against Ajax in their Champions League qualifying round offered good early exposure to an intense pressing style (indeed, Jonas Eidevall was not entirely happy with the robustness of their approach, with two Arsenal players going off injured due to heavy challenges). We saw that the opening game of the season, a 4-0 stroll against a Brighton side who went down to ten players after six minutes, was not ideal preparation for the first leg against a physical Ajax side, who upped the ante physically compared to Brighton.

The North London derby against a more physical Tottenham team did prove to be better preparation for the second leg on a rainy night in Amsterdam, however. Now safely into the Champions League group stages, Arsenal will need to ready themselves, not just for a tighter schedule, but for playing teams whose approach differs to their regular WSL opponents.

That’s not to say that every team they encounter in the Champions League is likely to be as intense and fast on the counter as Ajax but they probably won’t face many teams who camp in their own box with two banks of four, as WSL teams often do against the Gunners. That change in rhythm will aid Arsenal’s development as a team in the long-run but provides a stiff challenge in the short-term.