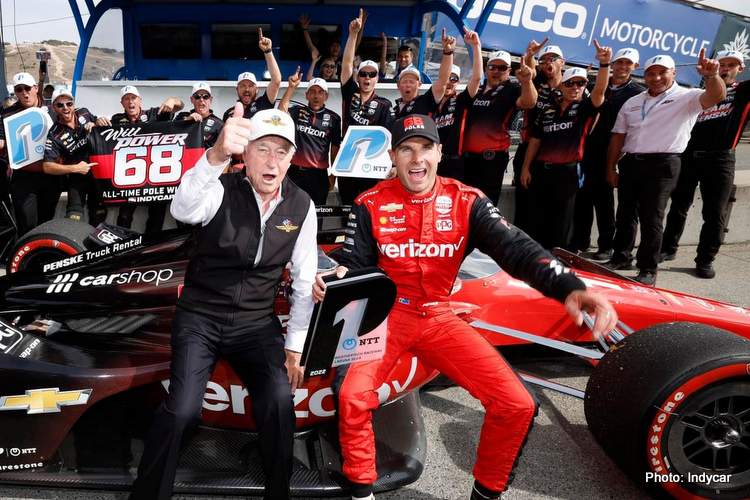 Will Power was pushed to the limit by Team Penske but withstood the internal challenge from his teammate to close out a season of consistency and win his second IndyCar championship on Sunday.

Power finished third at Laguna Seca Raceway to beat teammate Josef Newgarden for the championship by 16 points in the final standings. The Australian’s first IndyCar title came in 2014.

“Oh, man, it sounds so surreal,” Power said as he crossed the finish line behind outgoing IndyCar champion Alex Palou and Newgarden, who used a white-knuckled drive through the field to make Power sweat until the checkered flag.

Power needed only to finish third to win the championship. But Team Penske has proved over the last week that its cars race individually and all three drivers were on their own in this title decider. Newgarden was relentless.

“I’m ultimately just proud of the team,” said a crestfallen Newgarden. He’s talked in the last several days of his personal drive for perfection and the emotional toll its taken on him.

A five-time winner this season, his inconsistency simply put him in too deep of a hole to overcome Power’s season of consistency.

Newgarden had gone off course in a sloppy qualifying mistake that forced him to start 25th in the 26-driver field. He picked his way through traffic and used three nail-biting passes through Laguna Seca’s famed corkscrew to make it tight for Power. One of Newgarden’s big moves in the corkscrew was on Power, but Newgarden made it clean and pulled into second behind Palou. The American needed much more than that to win the championship.

Power, at 41 years old, has insisted all year he’s been “playing the long game” with an eye on a second title. The Australian won only once, but his average finish was sixth, and he’s barely bobbled all year. On Saturday, he won his 68th career pole to break Mario Andretti’s mark for most in series history.

Now the fastest man in IndyCar is the most consistent, too, and rewarded team owner Roger Penske with a 17th championship.

Palou, eliminated from the championship fight last week and locked into a legal battle between Chip Ganassi Racing and McLaren over his 2023 rights, won his first race of the year. He was the only Ganassi driver competitive at Laguna Seca, where five drivers were in title contention in the tightest championship race since 2003.

Palou had the field covered and dominated in the win. The four Ganassi cars tested at Laguna Seca but contenders Marcus Ericsson and Scott Dixon were never in Sunday’s fight. Ericsson, the Indianapolis 500 winner, finished ninth and six-time champion Dixon was 12th.

“We ultimately just didn’t have the pace,” Dixon said. “You win some, you lose some, man. This team never gave up.” Palou was the ninth different IndyCar winner this season and after taking the checkered flag, with current team owner Ganassi behind him, Palou was evasive on where he’ll drive next season. Ganassi says he picked up the option for 2023 on the Spaniard, McLaren says it has signed him, and the fight is currently both in the courts and mediation.

Palou in July definitively said he’d be a McLaren driver next year. After the win, he sounded less sure.

Palou’s dominance put the focus on Newgarden, who started the day 21 points behind teammate Power in the championship standings.

Colton Herta, the 22-year-old Californian being courted by the AlphaTauri Formula One team, was a nonexistent 11th in what could have been his last IndyCar race for some time. Herta won the last two races at Laguna Seca from pole and there’s serious interest from Formula 1 for his services according to reports.