THE LOWDOWN
Arsenal take on Spurs in the North London derby on Saturday in front of a record crowd for a WSL match. The previous record was set by these two teams at the Tottenham Hotspur Stadium in November 2019 when just over 38,000 were in attendance. With around 48,000 tickets sold for this game, that record is set to be beaten.

While that is fantastic for the advancement of the women’s game and for publicity reasons, for Jonas Eidevall and the team, this is about taking care of business on the pitch. Arsenal opened their league campaign with a 4-0 home win last Friday evening against Brighton while likely title rivals Chelsea and Manchester City fell to unexpected away defeats at Aston Villa and Liverpool.

New! Arsenal Women Arsecast mailbag with me and @ArtdeRoche. Topics

🔴 Competition between Maritz and Wienroither
🔴 Why WSL games are proving to be poor prep for UWCL games
🔴 Arsenal’s midfield structure against high pressing teams
🔴 When is the right time to rotate? 👇🏻 https://t.co/tEWARdDFrJ

City and Chelsea play one another on Sunday so there is the opportunity to extend their buffer over at least one of those teams. Arsenal also have the small matter of a Champions League qualifying round second leg in Amsterdam on Wednesday evening with the scores currently level at 2-2. It’s a big week for the Gunners.

Focus, for now, will be on beating Spurs who have never been their neighbours before. They came close last season at the Hive when the Gunners had been engaged in Champions League action in the days building up to the game. Eidevall will have to use his squad across these two crucial games but the team will understand how important both this game, and the occasion, will be on Saturday.

A WORD FROM THE BOSS
We saw that Ajax is a very physical team and we know Tottenham are too, they are the team that fouls the most in the WSL and they have been doing so consistently under Rehanne Skinner, so it’s very much a strategy they have to foul a lot and to try to be physical, we are prepared for that and we can see Ajax were similar.

We knew about that but you still have to experience it and that has probably prepared us in a good way. Different teams see our game and try to find solutions. Almost more than 50% of the time when we are preparing for teams, they do something different against us than what they have done in their previous five games.

For some reason they think they need to change, either their formation or the way they work, which means learning from that we need to put a lot of focus on what we are doing but to build almost like a database of solutions, so we can pick that up quickly and say, ‘ok, they are not playing like we thought, but it’s ok because two months ago we played against that approach. I feel as a team we are constantly experiencing things that help us to go forward and adapt and react and master situations better in the future.

TEAM NEWS
Teyah Goldie (ACL) is currently the only member of the first team squad who is injured. Mana Iwabuchi returns from illness and will form part of the squad.

LAST TIME OUT
The teams met at Emirates Stadium in May and Arsenal ran out 3-0 winners thanks to an early goal from Beth Mead and a second half brace from Caitlin Foord.

THE OPPOSITION
Tottenham finished in a very creditable 5th place last season which is roughly “best of the rest” territory after the ‘big four’ of Arsenal, Chelsea, Manchester City and Manchester United. In their first full season under Rehanne Skinner, Spurs became a very difficult and physical team to play who were defensively solid but with the ability to take the game to teams.

They conceded only 23 goals last season, just one more than the two Manchester clubs. However, they only scored 24 (United scored 45 and City 60) so it’s clear where they need to improve to bridge the gap to the big four teams. Spurs came to the Emirates with a physical approach last season that pushed the boundaries on occasion.

It prompted a pithy post-match assessment from Arsenal boss Jonas Eidevall, “It was a game between two very different styles, I am glad that the team that plays football won.” This game will follow a very similar pattern and, from an Arsenal perspective, that might prove to be good preparation for Ajax’s high-pressing approach on Wednesday night.

A winning start to the season, capped off with two spectacular goals 💥 pic.twitter.com/nsM5IY8sz0

PLAYER TO WATCH
Caitlin Foord has started this season as she finished last season, very strongly. The Australian is likely to start on the left and she has shown that, firstly, she is a player that can really handle the physical side of the game and bully opponents. Also, of the Arsenal front four, she is a really good dribbler and very strong at breaking down deep blocks.

That is the challenge that Spurs will pose on Saturday, they will sit deep and look to frustrate. However, Tottenham have a strong right-sided bias when they attack, largely because right wing-back Ashleigh Neville is one of their strongest attacking outlets. If there is a space in the Spurs defence that is where it is likely to open up.

Foord scored twice in this fixture last season, she was excellent when she started against Brighton on Friday and also enjoyed a very impressive cameo from the bench against Ajax on Wednesday. That will likely earn her the start over Lina Hurtig for this match. Foord’s form since returning from the Asia Cup in February has been outstanding. 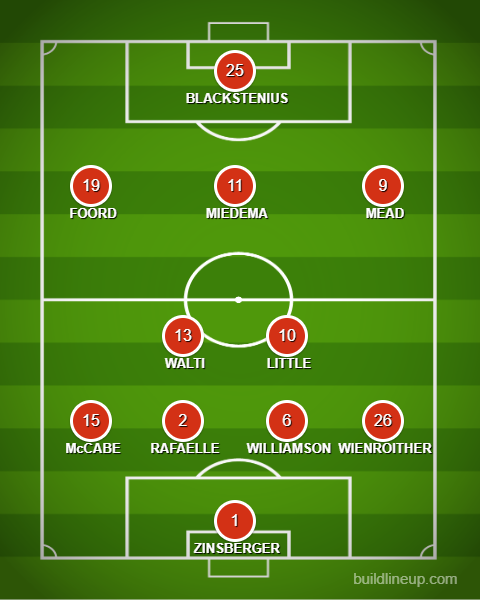 COMING UP
Hopefully you have already seen that the Athletic’s Art de Roche and I recorded a preview podcast ahead of this game, we will have some video content around this match too going out on Saturday afternoon. We will also have Jonas Eidevall’s post-match reaction live on the site on Saturday afternoon shortly after the game.