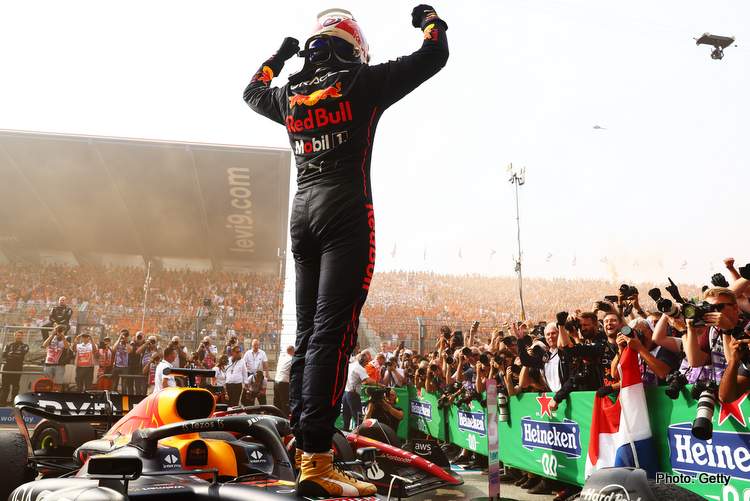 Jacque Villeneuve hailed the Max Verstappen and Red Bull combination as unbeatable after the Dutchman won his tenth race this season at the 2022 Dutch Grand Prix.

The reigning Formula 1 World Champion won his home grand prix at Zandvoort for the second time in a row ever since the event returned to the sport’s calendar in 2021.

It wasn’t an easy race to win, as a combination of an on form Mercedes as well as Virtual Safety Car and Safety Car periods meant Verstappen had to work hard for it, but in the end his flawless driving combined with Red Bull’s perfect strategy meant the Dutch fans could celebrate their local hero, who took to the top step of the podium.

Reflecting on the race in his formule1.nl column, Villeneuve said: “At the moment, the combination of Max Verstappen and Red Bull is virtually unbeatable.

“They have the perfect chemistry, have the momentum and are now a combination like Lewis Hamilton and Mercedes in their peak years,” he added.

A surprise how Ferrari are so far off Red Bull

“Beating them would take a perfect season and for them to make mistakes,” the Canadian went on. “And what mistakes has Verstappen made? Small errors in Spain and Hungary, after which he still won.

“Still, I can’t believe that we have two cars that are close in speed to each other and yet the championship is as good as decided with seven races to go,” he pointed out at Ferrari’s inability to run Red Bull close despite their impressive F1-75.

“While they should have been within twenty points of each other. Ferrari and Charles Leclerc were simply not ready to take on Verstappen and Red Bull this year. They have lost too many points for that,” Villeneuve insisted.

The 1997 F1 Champion believes Red Bull will dominate Ferrari’s home race in Monza next weekend, saying: “Looking ahead to next week in Monza, it is certain that Ferrari will have a very difficult weekend at its home race.

“Red Bull will be super fast – they are fast everywhere at the moment. Ferrari will be under a lot of pressure. I am very curious what the effect will be, because the tifosi want to see a victory,” Williams’ last F1 Champion mused.