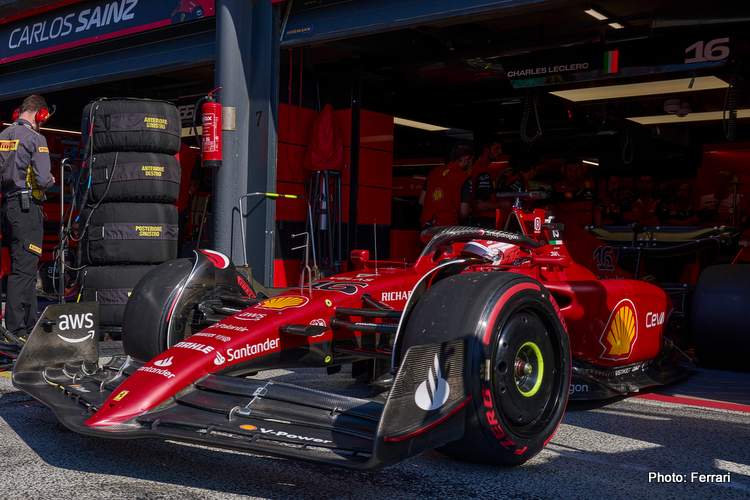 Charles Leclerc conceded that Ferrari might not be able to keep up with Red Bull at this weekend’s 2022 Italian Grand Prix, as on paper, Monza will no be the Scuderia’s best track.

Having started the season as a favorite for this year’s Formula 1 Title, Charles Leclerc now heads to Ferrari’s second home race this season at Monza with dwindling Title prospects, knowing that the team’s F1-75 may not be able to keep up with Red Bull’s RB18 around the Temple of Speed.

Looking at this weekend, Leclerc told F1’s Official Website: “Let’s be honest, on paper it’s probably not our best track.

“I think Red Bull have been very strong since the beginning of the year, especially in straight line speed, but we’ll give it all and with the motivation of the Tifosi, I hope we can have a great weekend for them,” he added.

“The special thing about Monza is when you get there, you feel so little grip because you’ve got a very low downforce setting. There is no grip at all and extremely fast in the straights,” the Monegasque revealed.

“It’s a very strange feeling, because you always like new challenges as a driver and Monza is one of those challenges, where you need to adapt your driving just for this weekend and this makes it exciting,” he explained.

Back in 2019, Leclerc won the second grand prix of his career at Monza during his first season as a Ferrari driver, having started from pole position, fending off race long pressure from Mercedes’ Lewis Hamilton, holding on to deliver a famous win for the Scuderia and the Tifosi.

Leclerc looked back on that day, he said: “There were people as far as I could see. It was packed. I was trying to find my mum. She was in a grandstand.

“She arrived Saturday night because she saw I had done the pole position but I didn’t have the pass for the Sunday – I had already promised it to someone else so, I said ‘Mum the only thing I can get you is a pass in the grandstand’, so she was on the main straight. I was trying to find her but there were way too many people,” he revealed.

“Being up there was a very special moment,” Leclerc said of his 2019 podium celebrations at Monza. “Racing for Ferrari, you only see red – or 98% of people are red – and this make you feel like home.”

Leclerc admits it feels surreal that he now finds himself in place of all the great previous Ferrari drivers he used to watch and look up to as a kid.

“It’s very strange as in the end, I’m the same person that I was as a kid, looking up at those F1 drivers,” he said. “Then one day, you find yourself in a situation you never imagined.

19 wins for @ScuderiaFerrari at Monza.

Being part of the Scuderia is special

“When I was a kid, I never thought I would one day be in the same place and some kids would be looking up at me,” the 24-year-old admitted.

“It’s a very special feeling,” he went on. “I feel proud, I feel so lucky to be part of the Ferrari team and be a Scuderia Ferrari driver.

“These types of moments are very special whenever you see loads of people are supporting you, are living your career with you.

“They are happy when you are happy, sad when you are sad. It makes you feel like you are not alone,” the five-time grand prix winner maintained.

Leclerc finished the 2022 Dutch Grand Prix third, and will be hoping to make a podium appearance in front of the Tifosi at Monza, preferably on the top step, but with Max Verstappen’s and Red Bull’s current form, this will be a big ask from the young Ferrari ace.