Arsenal were in complete control from the first until the last minute in their comfortable 3-0 win over Everton on Sunday. The hosts were indeed very passive as they set up in a 541 formation and sought to frustrate Arsenal before releasing Toni Duggan ploughing a lonely furrow upfront.

Everton succeeded in frustrating Arsenal initially but their counterattacking game plan did not produce any sort of fruit for Chris Roberts’ side. Everton summoned one shot on goal and it arrived in stoppage time. That sounds like an easy day at the office for Jonas Eidevall’s side but a lot of sweat and hard physical work went into nullifying Everton as any sort of attacking force in the game.

Arsenal managed 25 shots and, even though they had 68% of the possession, they were not far behind on number of tackles won compared to Everton (Arsenal won 11 and Everton 13), they made more interceptions (13 to Everton’s nine) and committed seven fouls compared to Everton’s four. The Gunners simply strangled Everton like a boa constrictor any time the home side tried to possess the ball.

Counterpressing is distinct from pressing in that it tends to happen within five seconds of you losing the ball. This has been part of the evolution of style under Jonas Eidevall, where the players are encouraged to attack forcefully and not be afraid of losing possession. When they do, the aim is to crowd the opposition and win it back within five seconds.

This is often a good method of chance creation. Teams are momentarily defensively disorganised when they retain the ball and nicking it back off them in those vulnerable microseconds affords the opportunity to attack space before teams reset defensively. Arsenal created some good chances with their counterpressure against Everton.

It’s also a very effective tool for controlling a game when executed correctly, it prevents the opponent from settling and building attacks. The relentlessness of good counterpressure makes opponents physically and mentally tired as they never have a chance to breathe with the ball and create pressure. Let’s look at some examples from Sunday’s game. 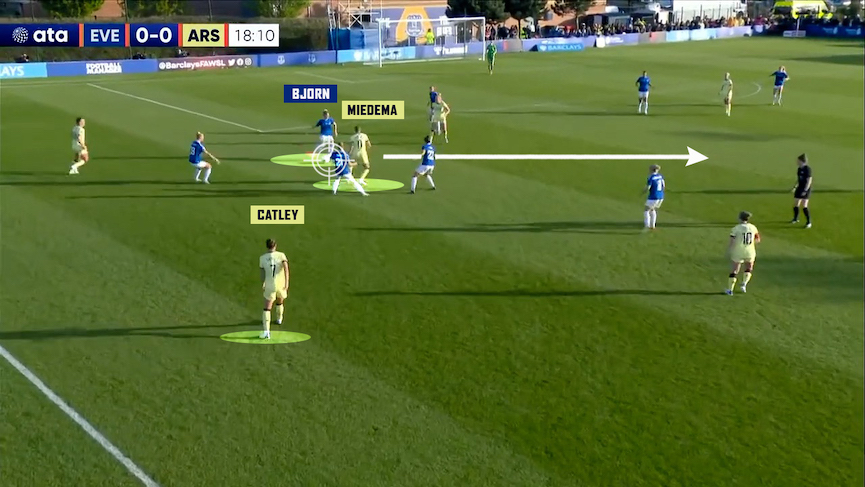 Steph Catley’s throw-in to Vivianne Miedema just squirms away from Miedema here and Nathalie Bjorn sweeps up and looks to get Everton on the move with a first-time forwards pass. 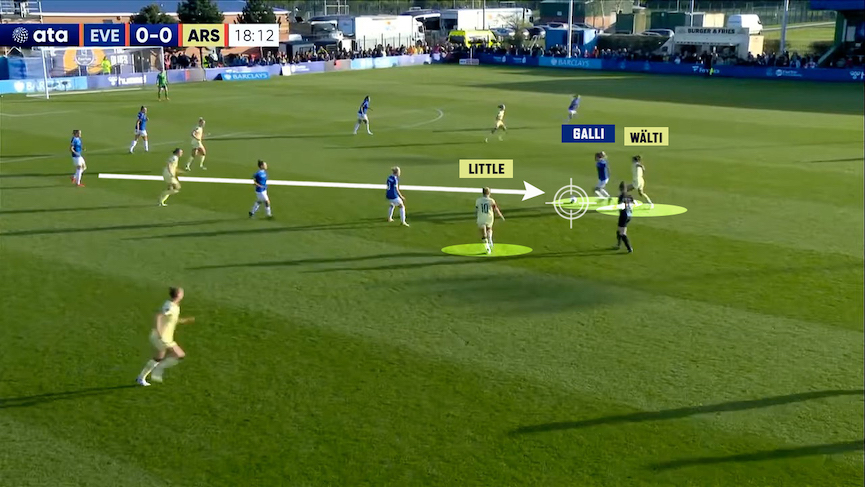 The ball is fed into Galli and straight away, Wälti and Little round on her. 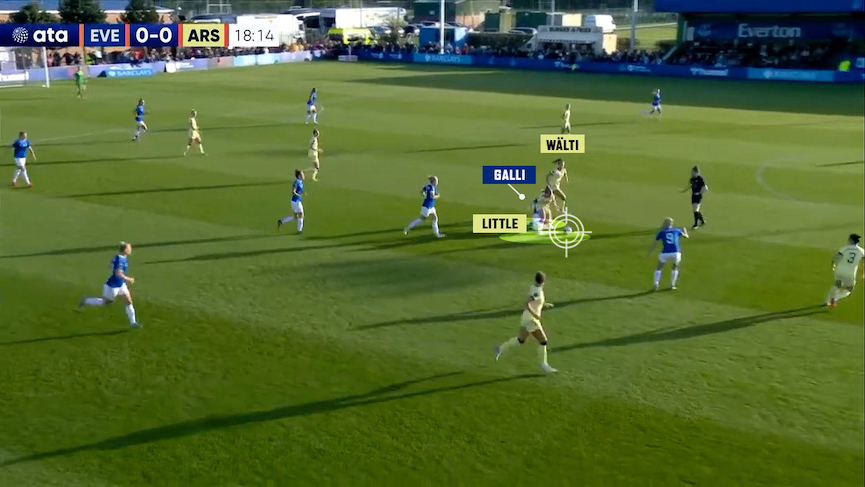 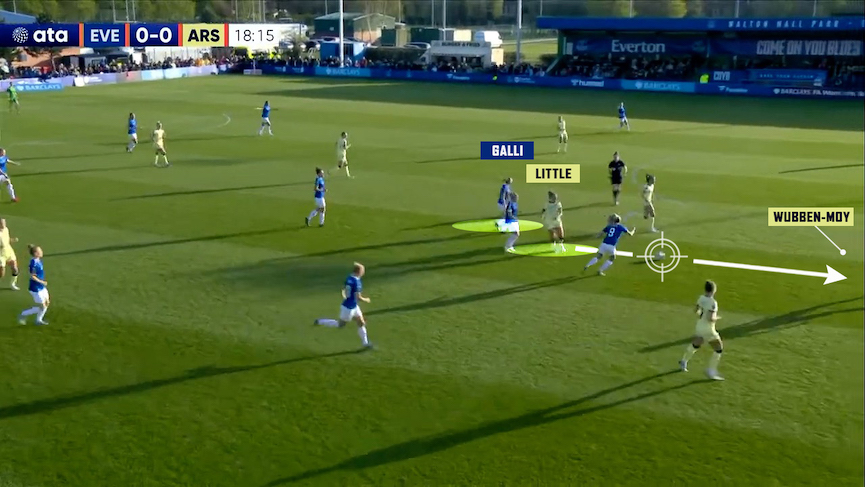 With Wälti and Little surrounding her, Galli has no choice but to turn into one of them and try to turn. She tries Little’s side but Kim holds her off and wins the ball back. Not only have Everton not been able to complete two passes to build an attack, it also means their defence is back under pressure three seconds after Bjorn has the ball at her feet. 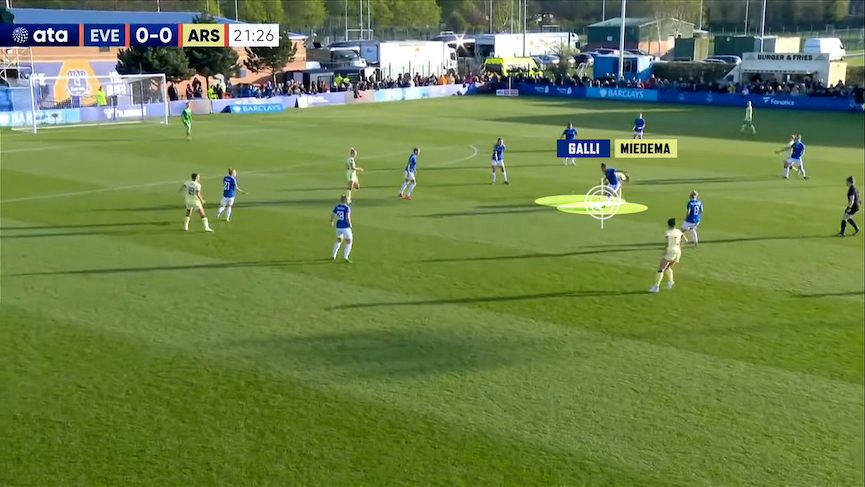 Here, Miedema is again just squeezed off the ball by Galli and Everton ought to be able to either break on Arsenal or, at least, have the ball for a few moments and relieve the pressure. 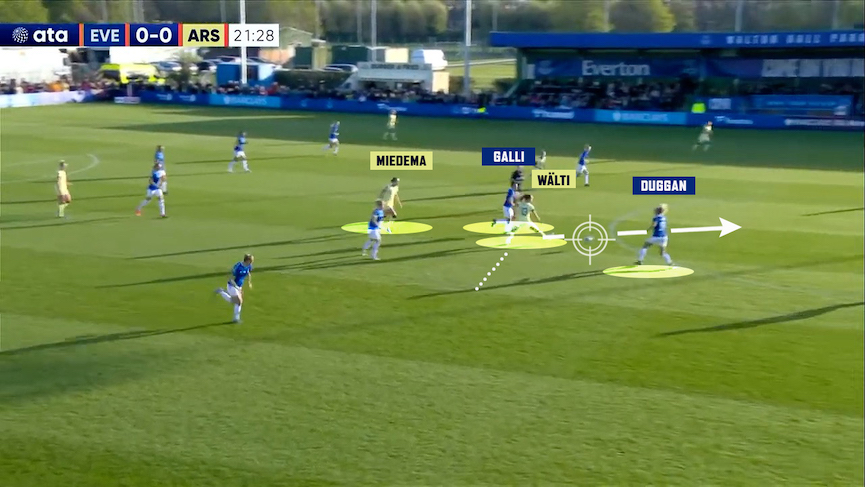 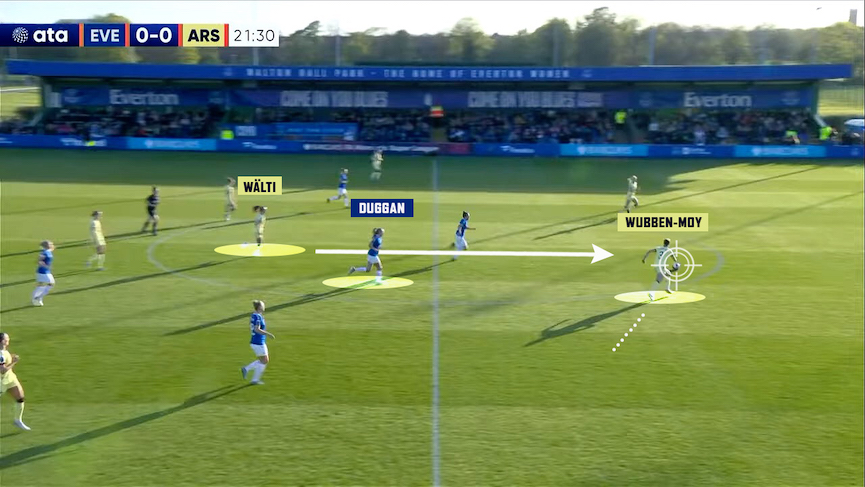 But Lia Wälti has other ideas, she immediately counterpresses Galli and though she doesn’t win the ball back cleanly, her interception takes the ball away from Toni Duggan, who has had to drop so deep to try and see the ball. Wubben-Moy collects the loose ball and Everton once again have to reset defensively and prepare to chase the ball again. Over the course of a game this really begins to wear a team down and that’s a large part of the reason Arsenal created slightly more in the second half than the first. They tired Everton out with this sort of pressure. 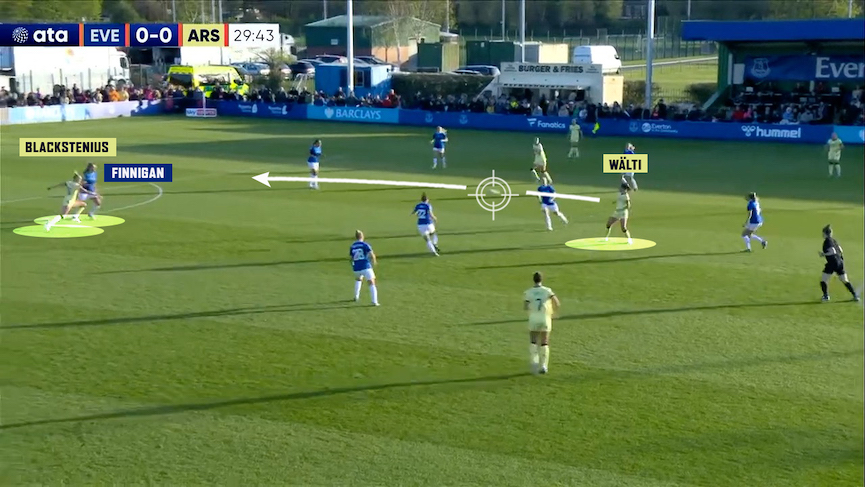 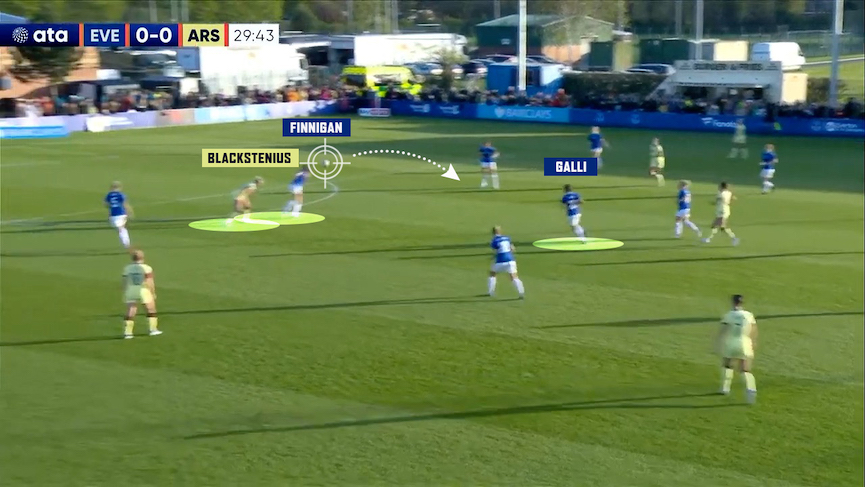 Arsenal create their best chance of the half (if we ignore the outrageous decision to flag Stina Blackstenius’ goal offside) through a counterpressing situation. Lia Wälti’s first-time ball towards Blackstenius is headed away by Megan Finnigan. 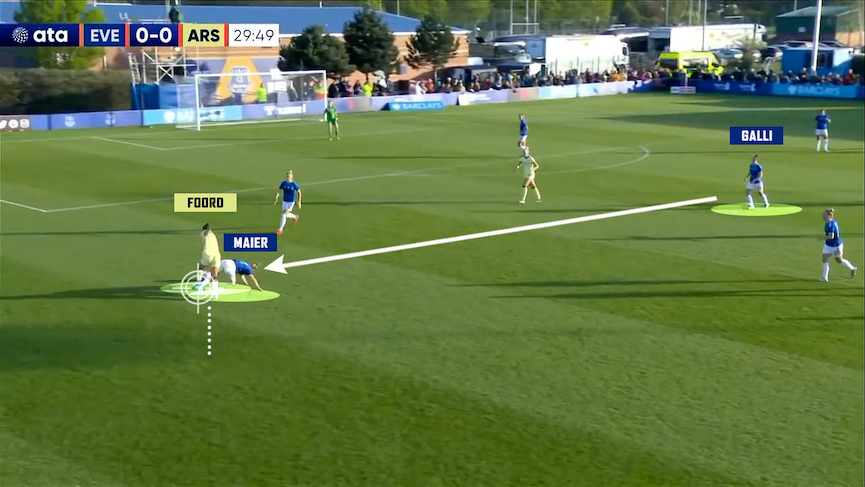 Finnigan’s clearance finds Galli but when Galli passes to Leonie Maier, Caitlin Foord is onto her like a whippet and wins the ball back. Everton relax for a second because they think they have possession back and look at the space Blackstenius is now in. 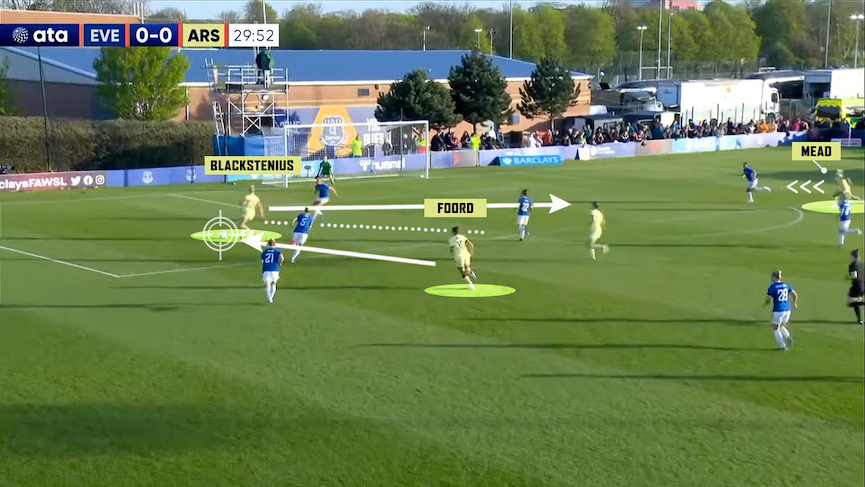 Foord finds Blackstenius’ run in the channel and her cross is touched about a cm wide of the post by Beth Mead. 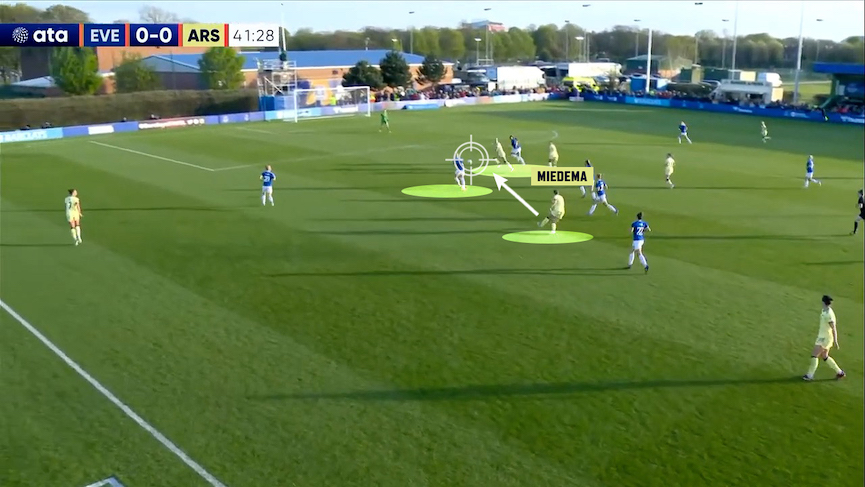 Arsenal really begin to build pressure just prior to Caitlin Foord’s opener on 43 minutes. When Miedema’s outside of the boot pass is cut out, look at how hard Arsenal work to win the loose ball back to stop Everton either launching a counter or just holding onto the ball for a few precious seconds. 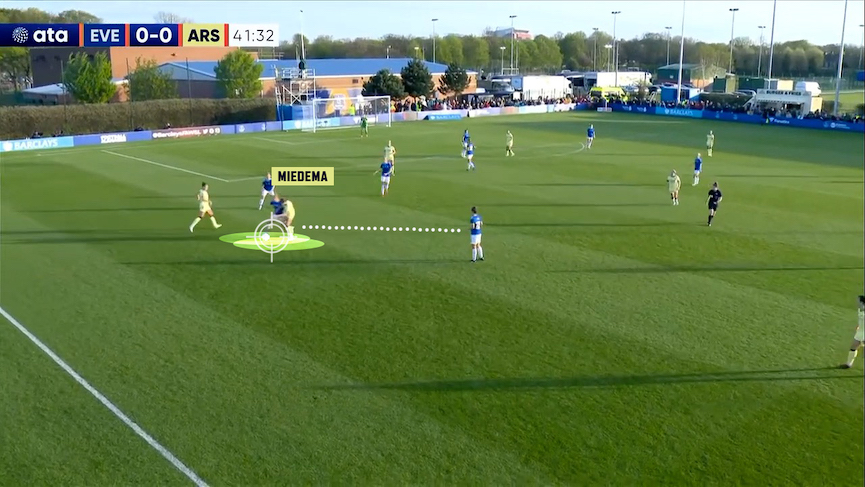 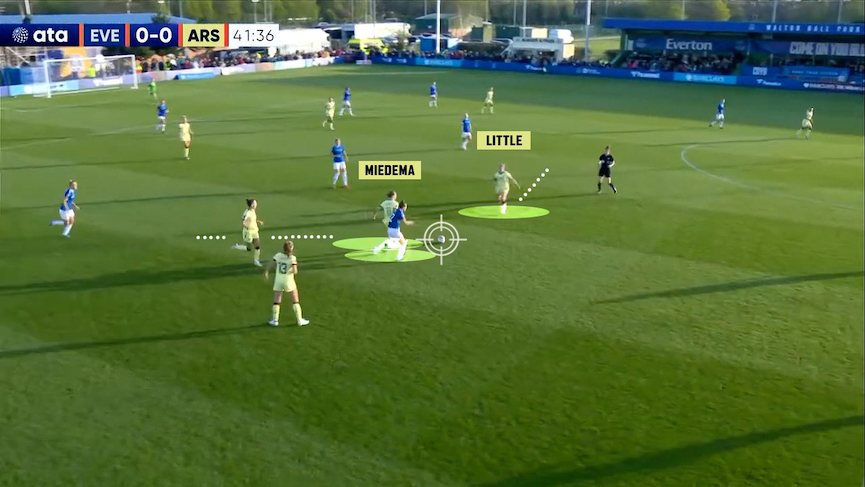 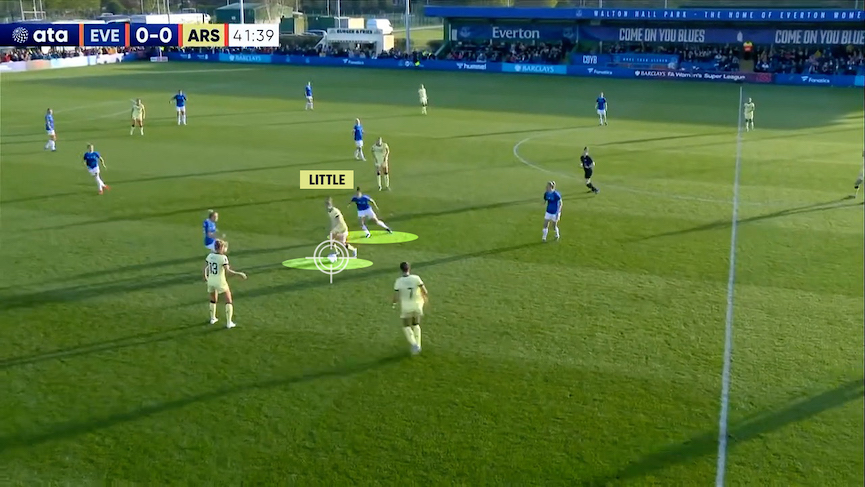 Miedema harasses the Everton players, leading to Kim Little winning the ball back and Arsenal getting the home side back under pressure. 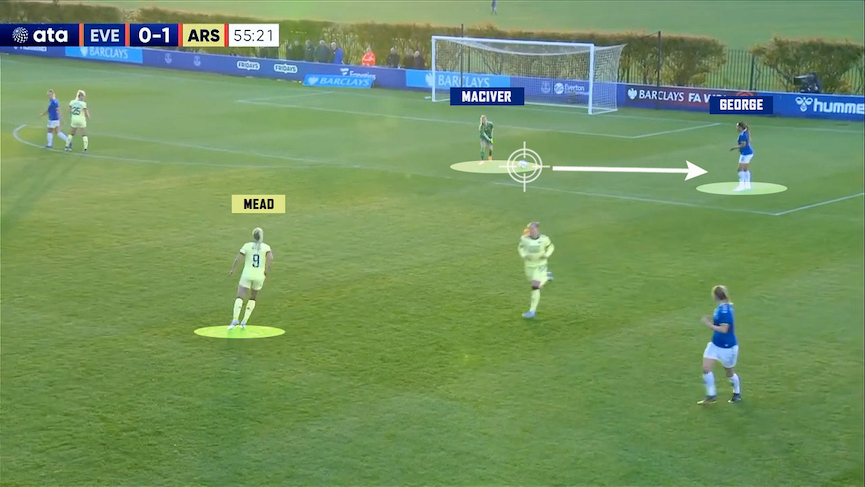 When it comes to pressing and counterpressing, there isn’t a more effective presser than Beth Mead. A Leah Williamson pass is slightly overhit, Sandy MacIver collects the ball and Everton think they can breathe. 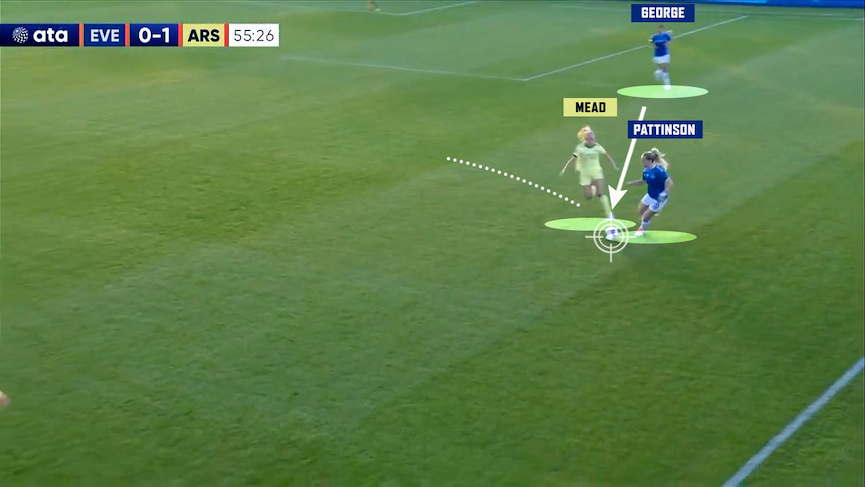 MacIver rolls the ball to George who finds Pattison and Mead is straight onto her. 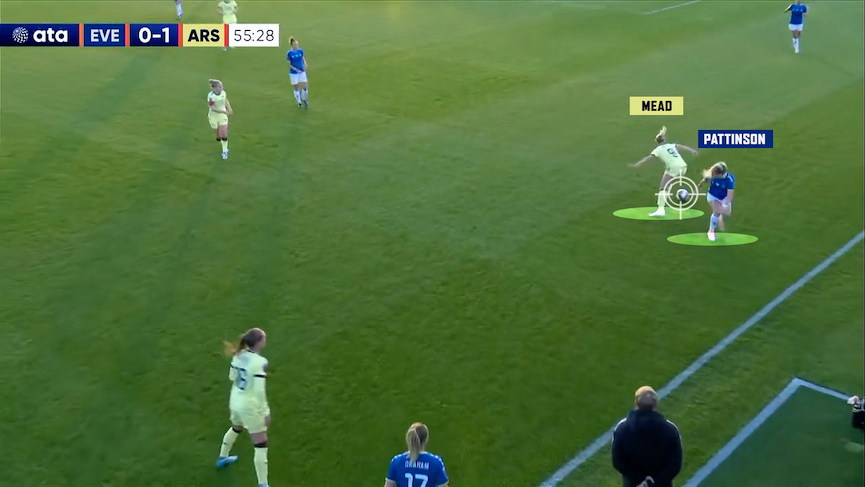 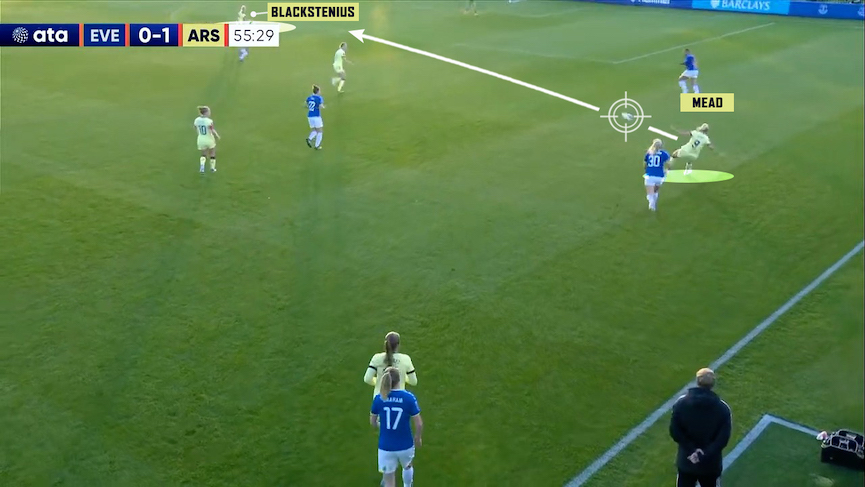 Mead wins the ball back and immediately fires the ball into Blackstenius. 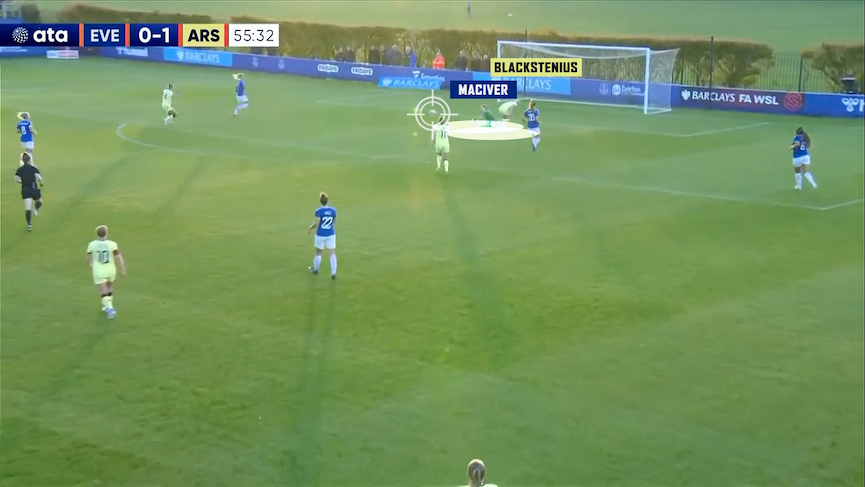 Acting quickly once you have won the ball back is the essence of a good counterpress and Mead does that. Within eight seconds of MacIver cuddling the ball, she has to make a save. 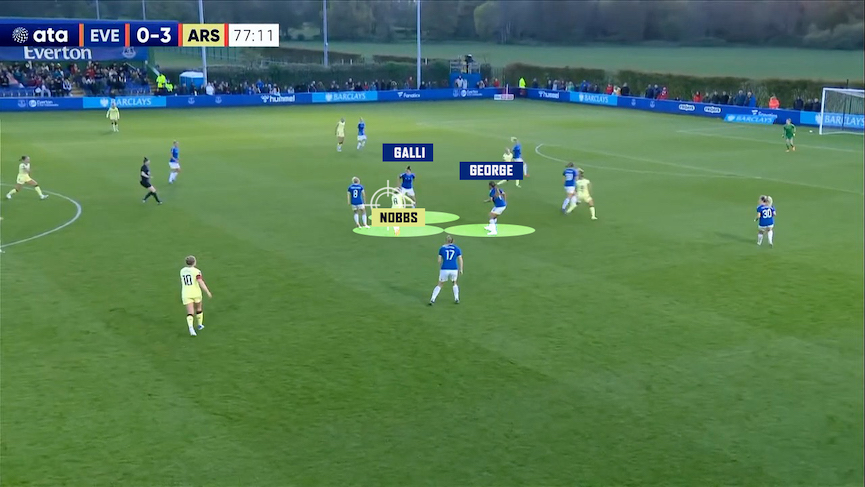 Galli and George combine to intercept a Nobbs pass here but they are just not given the opportunity to build anything or release the pressure. 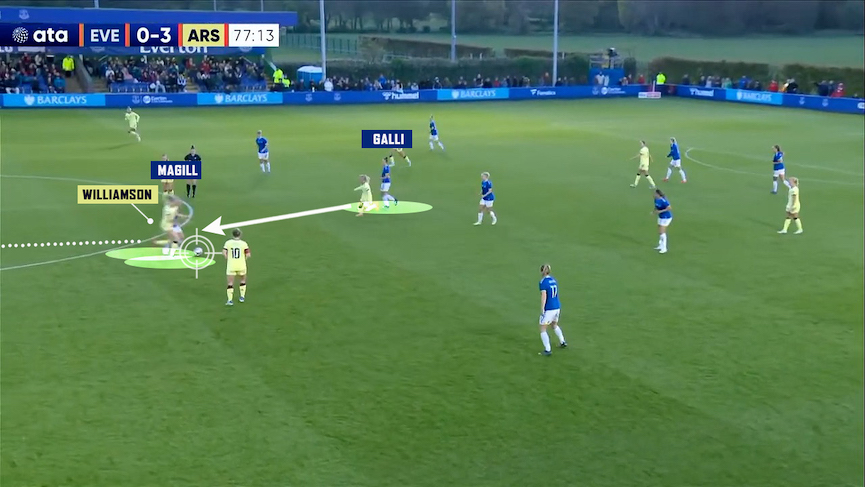 Galli tries to poke the ball forward to Magill and Leah Williamson bulldozes through her to stop her from controlling the pass. 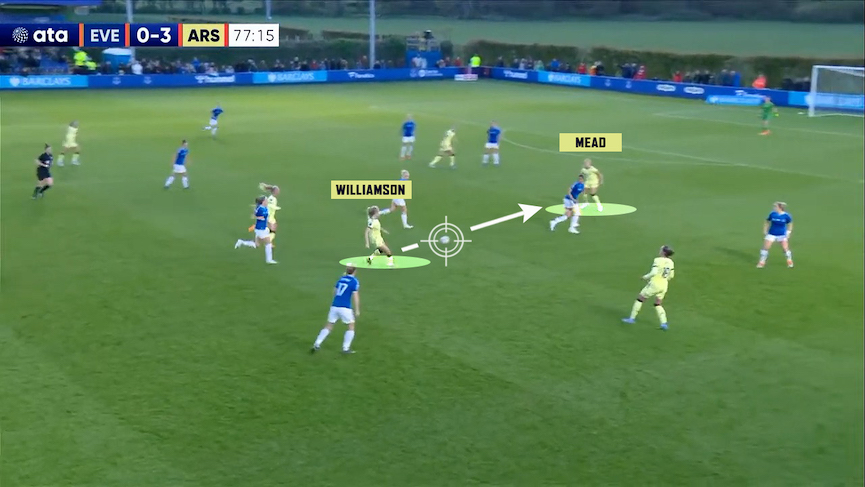 From there, Williamson plays a slide rule pass to Mead, who finds Miedema, whose shot is well saved by MacIver. 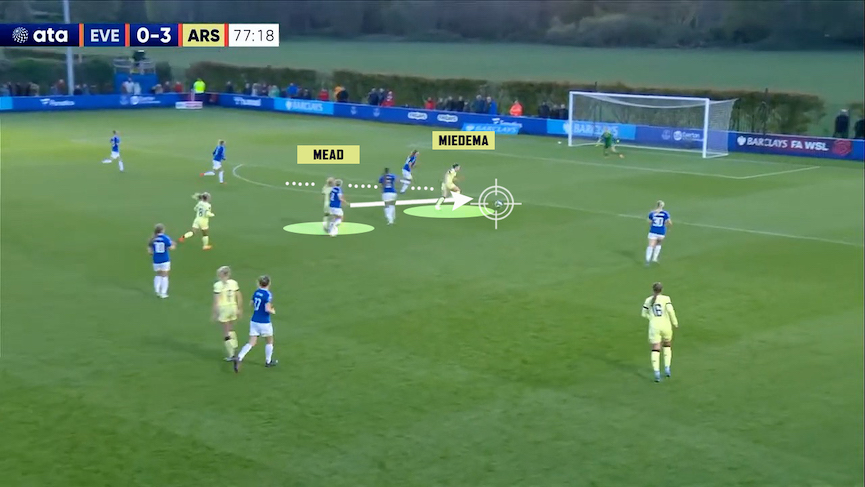 By winning the ball back in the fashion that she does, Williamson catches George out of position at left centre-half and Miedema makes a run into the gap she leaves to get the shot away. 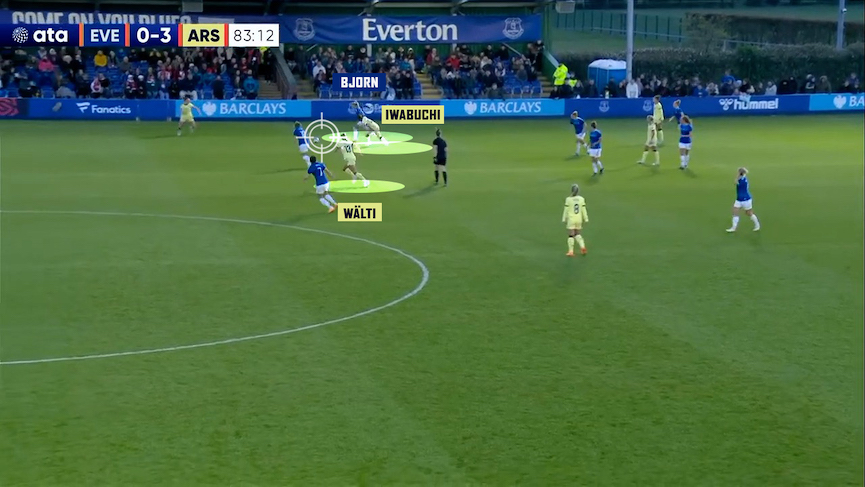 Even at 3-0 up on 83 minutes, there is no let up. Bjorn muscles Iwabuchi off the ball in this example and Arsenal are committed ahead of the ball. 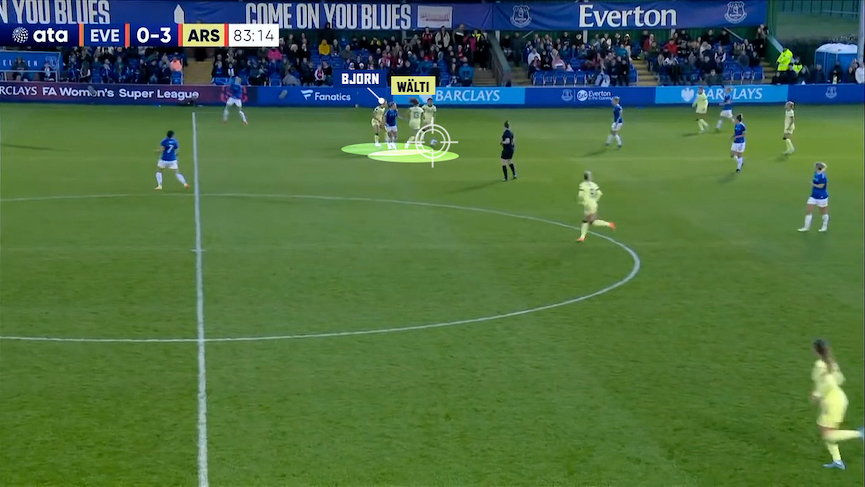 But Lia Wälti is across in the blink of an eye and Arsenal are back on the attack within two seconds of Iwabuchi’s dispossession.

Everton were prevented from building or relieving pressure all evening thanks to Arsenal’s assertive counterpress.