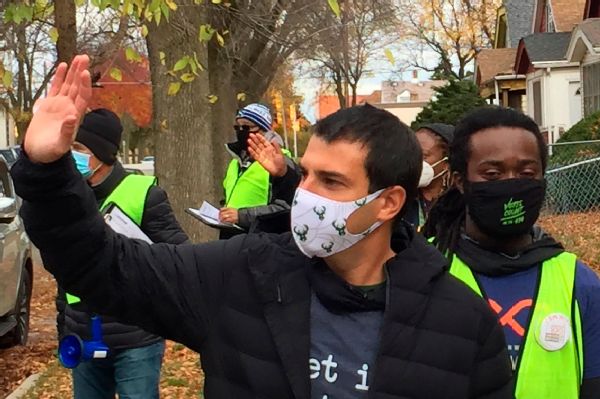 Lasry’s departure leaves Lt. Gov. Mandela Barnes as the top Democratic candidate in the hotly contested primary for what is expected to be one of the most hard-fought Senate races this year. The race in battleground Wisconsin, which Donald Trump narrowly won in 2016 but lost by a nearly equal number of votes in 2020, could determine which party holds majority control in the 50-50 Senate.

Barnes has led in public polls, all of which showed a tight race between him and Lasry. This week, Barnes’ campaign released an internal poll that shows Barnes ahead of Lasry by 14 points.

“It’s my belief, based on the data I’ve seen, Mandela is going to win the primary,” Lasry told The Associated Press.

Lasry said he decided to drop out after consulting on Tuesday night with Democratic U.S. Sen. Tammy Baldwin.

“Look at the data, it just wasn’t there. Over the last seven, 10 days there was just a number of data points that showed Mandela’s support continued to grow,” Lasry said. “When we realized there was no path forward, we wanted to make sure we did everything we could to put our party in the best position to beat Ron Johnson.”

State Treasurer Sarah Godlewski, who has trailed Barnes by double digits, and other lesser-known candidates remain in the contest. On Monday, Outagamie County Executive Tom Nelson dropped out of the race and endorsed Barnes. Lasry will endorse Barnes, his campaign spokesman Thad Nation said.

Barnes, in a statement, said he was proud to have Lasry’s endorsement and called him a friend.

“I look forward to continuing that friendship as we hit the trail,” Barnes said. “Together, we are going to unite Wisconsinites from every corner of the state to defeat Ron Johnson.”

Lasry, 35, already had spent more than $12.3 million of his own money on the race. His plan to drop out were first reported by the Milwaukee Journal Sentinel.

Lasry was born in New York City and moved to Milwaukee in 2014 after his billionaire father was part of a team that bought the NBA’s Bucks. Lasry served as an executive vice president for the team and has touted his connection to the 2021 championship Bucks, frequently mentioning their title run and employing union workers to build the stadium where the team plays.

He also played a pivotal role in landing the 2020 Democratic National Convention in Milwaukee. The event was moved online due to the coronavirus pandemic.

The Milwaukee Journal Sentinel first reported Lasry’s intent to drop out of the race Wednesday.

Even though Lasry and Nelson are ending their campaigns this week, both of their names will remain on the primary ballot. In-person absentee voting started Tuesday in the state.

NBA bans some from FedExForum after probe