Despite the painful late manner of the defeat to Manchester United on Saturday, Arsenal can have few complaints as to whether the visitors deserved the victory. United won the XG 1.17 to 0.53, enjoyed 57% possession and, in my view, the big difference in the game lay in the following statistic- United completed 84% of their passes and Arsenal only 73% of theirs.

The loss of Kim Little, allied to the existing losses of Leah Williamson and Rafaelle made for an unfamiliar spine and it showed against strong opposition. I asked Jonas Eidevall about Arsenal’s struggle for technical control in the game post-match, “We were too disconnected, we didn’t provide enough short passing options around the ball.

“In the second half, our decision making let us down at times. The positioning was better but we ended up taking some strange decisions with the ball. You are completely right, the outcome of that was that we didn’t have a lot of times when we had 45-60 second spell in United’s half and sustain attacks.”

In the first half, Arsenal were passing and overwhelmed by United. In the second, they salvaged the game as a contest but still didn’t exert technical control. It went from Arsenal on the back foot to a slugfest. At 2-1 with around seven minutes to go, they just never had the technical composure to take the sting out of a transitional game. Let’s look at some examples.

As Arsenal build from the back here with Wubben-Moy, Wälti is well looked after by Toone and Russo. Ideally, Nobbs should be dropping in to either provide Wubben-Moy with the short pass or dragging one of Toone or Russo away from Wälti and opening up space elsewhere. 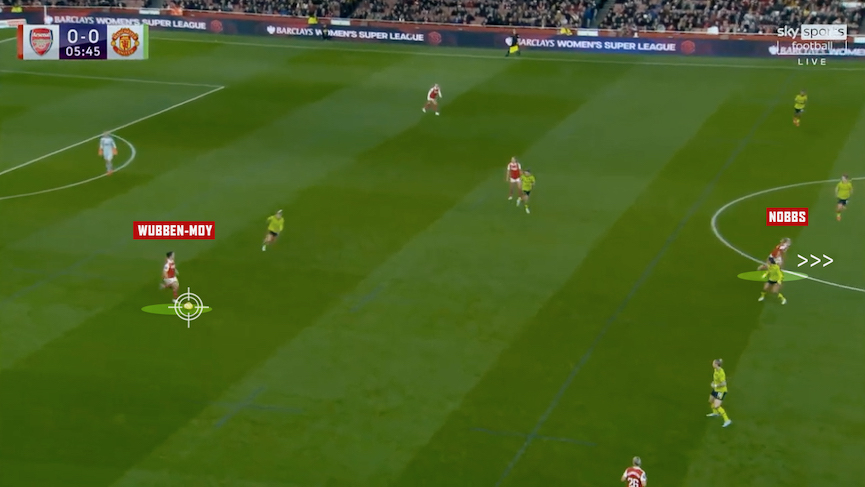 Nobbs opts to run forward in an attempt to push United back and Wubben-Moy has to go long. 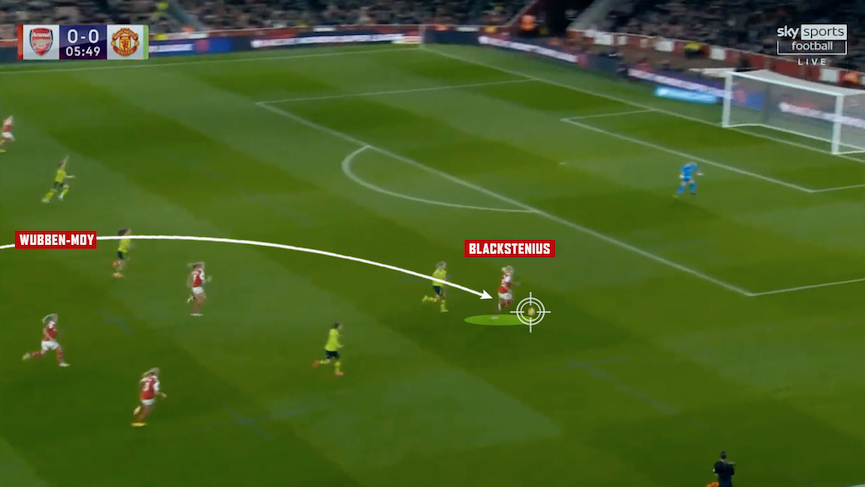 In fairness, Blackstenius is only a fraction offside otherwise this would have been a good situation but the game was too transitional and Arsenal were forced long too often. “We didn’t have enough short options for the ball, we positioned high too early and we were not compact enough,” Eidevall would go on to say in his post-match press conference. 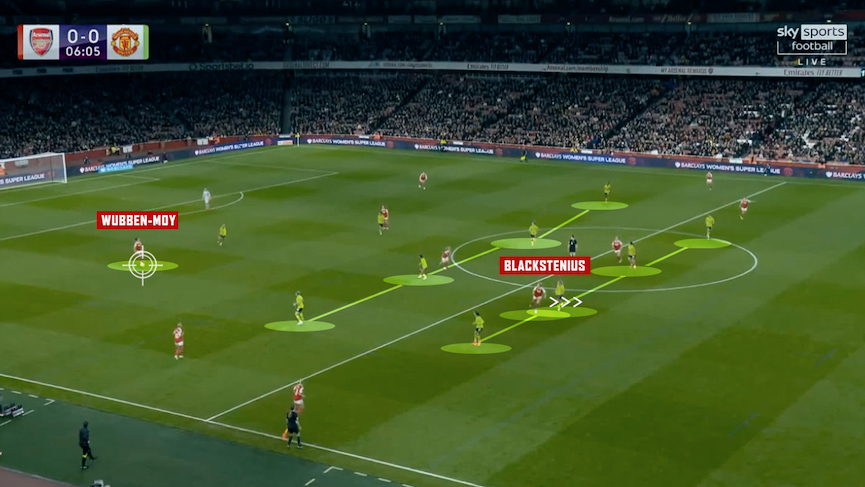 We see from this angle that going long is not a bad idea for Wubben-Moy with the United defensive line very high; but the midfield could have done more to drag United players out of position in the middle of the field and created space for themselves that way. Ultimately, Arsenal have the ball under control here but look at how many players United have in midfield compared to Arsenal. Arsenal emptied that space too quickly. 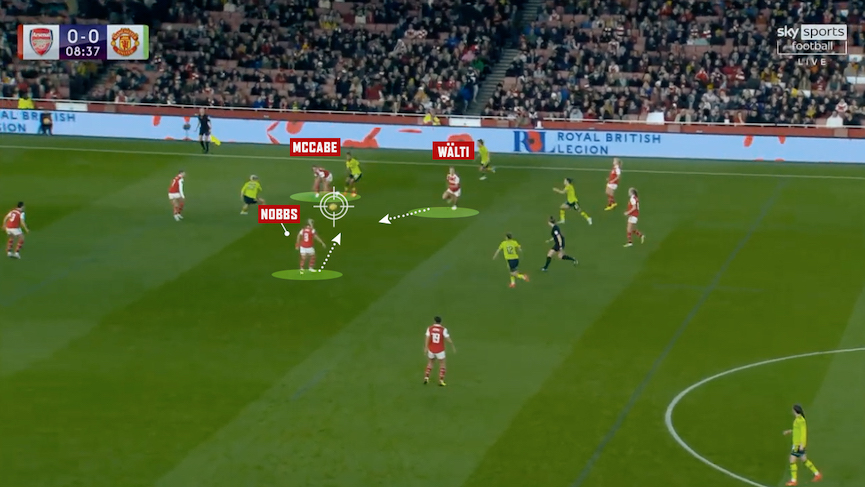 On occasion, Arsenal were hampered by a lack of understanding, which takes time to develop in a new-look midfield. As McCabe intercepts this ball and it breaks loose, Wälti and Nobbs both go for it. One should go for it and the other stand off and look to receive a pass so Arsenal can play their way out of the situation. 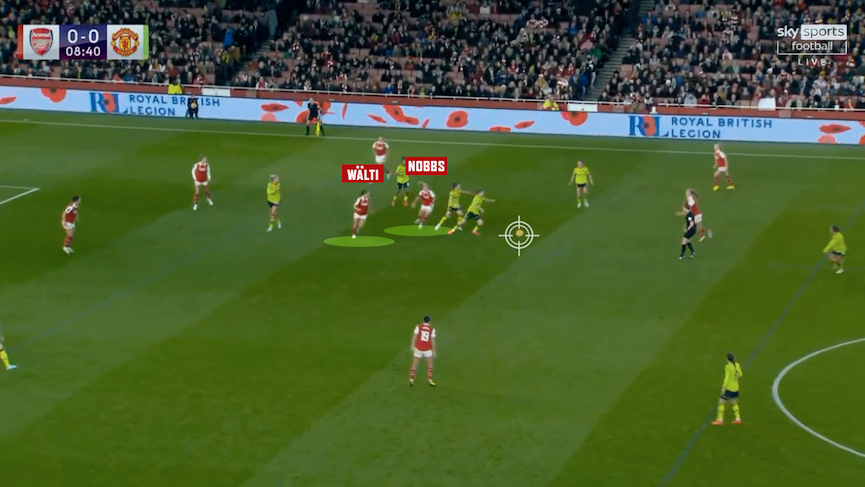 But they both go to the ball, get in one another’s way and United are able to keep the pressure on. 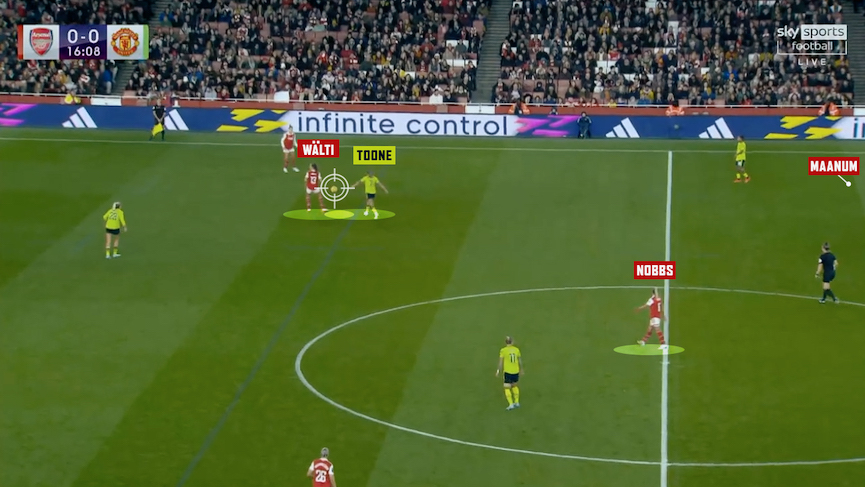 Arsenal have a free-kick in the left-back spot here, Wälti shows to receive the short pass with Toone at her back. Nobbs hasn’t had time to jog back into position nearer to Wälti and Maanum isn’t in the shot. The midfield pegs are too far apart. 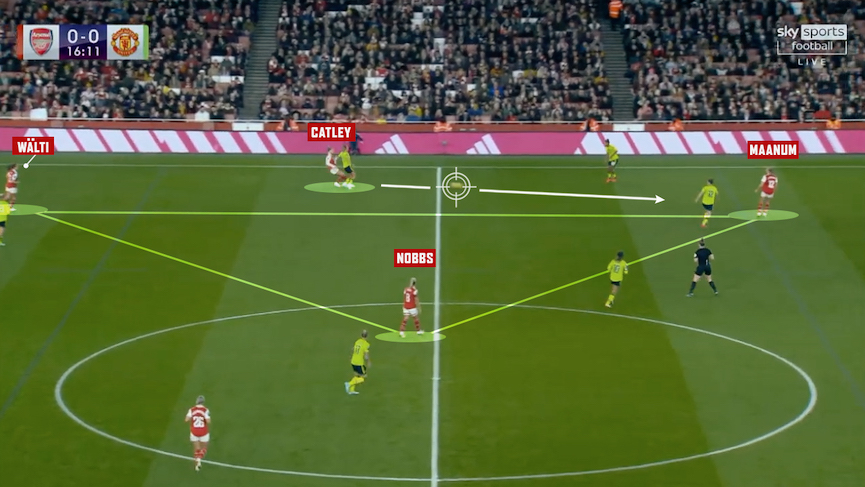 Catley is left to try a difficult ball to Maanum which is intercepted. Frida has had a lot of success in that left half-space in recent weeks but in doing so, has arrived there later on in moves as the build-up develops. Here she is perhaps in too much of a hurry to exploit that space and becomes too disconnected from the other midfielders. If you look at the shape of Wälti, Nobbs and Maanum here it is far too narrow, there is little chance to spread play and the three players wouldn’t be able to find one another in possession if they had it. 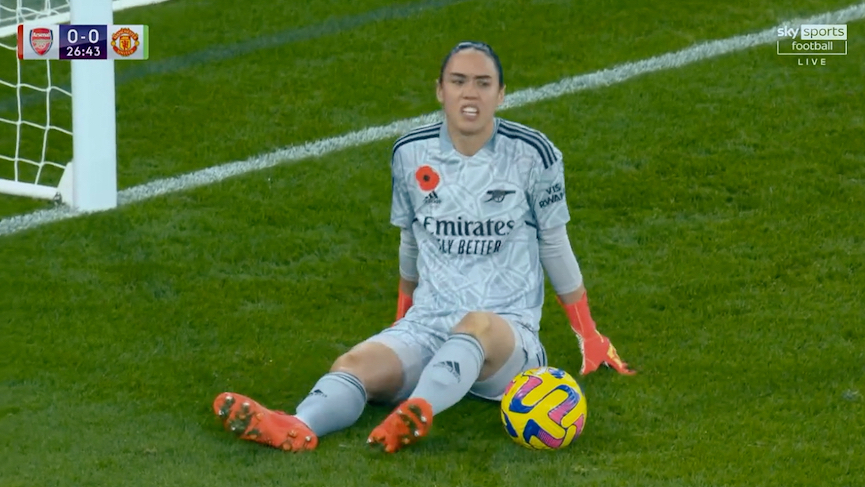 You can always tell when Arsenal are in a bit of trouble, performance wise, when Zinsberger goes down for treatment, giving Eidevall a chance to call an in-game huddle. 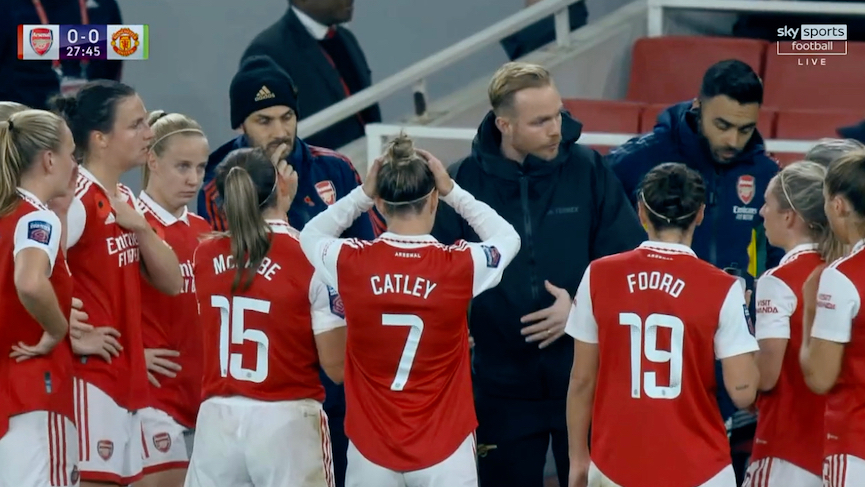 During this teamtalk, we see Eidevall speaking to Jordan Nobbs. 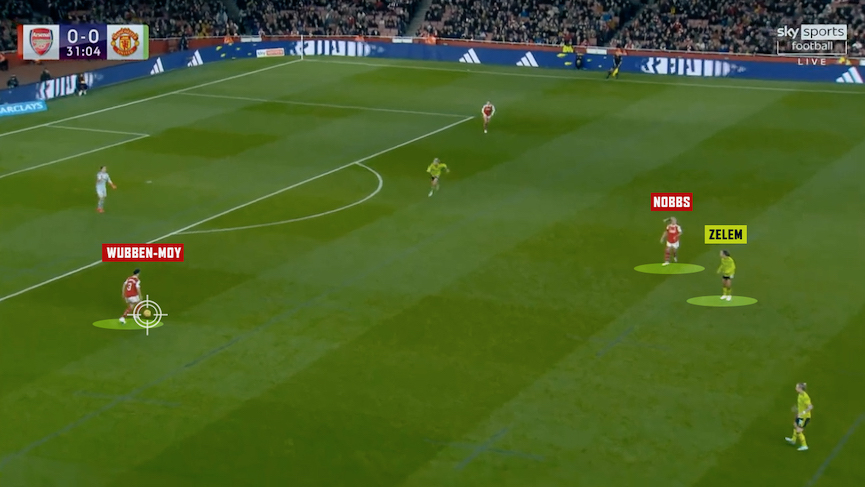 The next time Arsenal build, it’s Nobbs who has dropped deepest where we would usually see Lia Wälti. In doing so, she takes Katie Zelem, who has been playing deeper, with her. 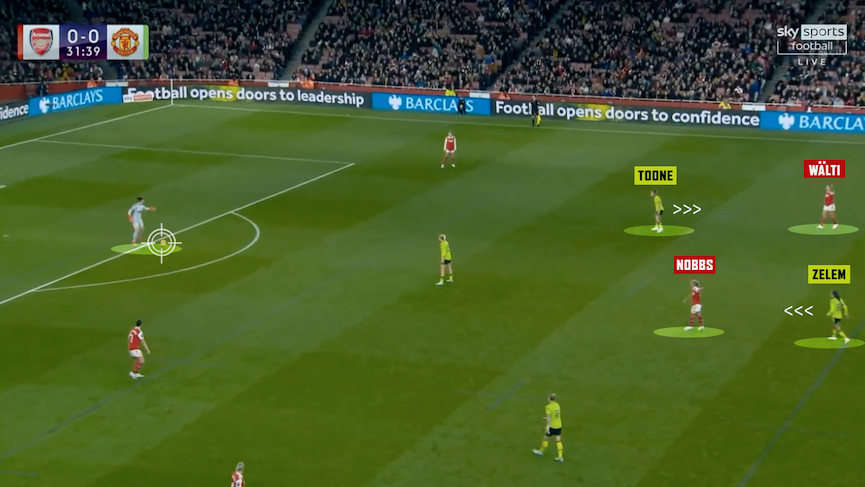 And again, a few seconds later. Wälti pushes on in the left central midfield role and Nobbs drops back. Toone follows Wälti and it takes her away from the press, while Zelem is again attracted into following Nobbs. 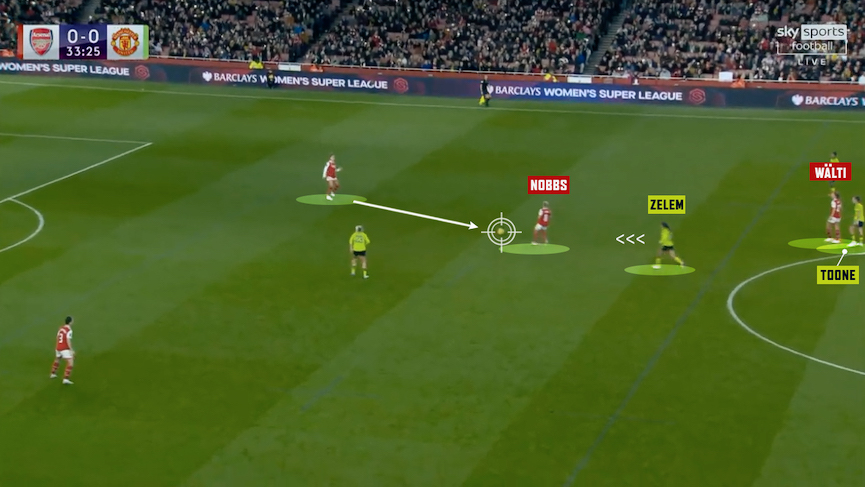 Sure enough we see the same thing a few seconds later, with Zelem attracted away from her deep position to track Nobbs. Arsenal have manipulated United’s press quite successfully here but they just aren’t able to find the pass or the dribble to exploit the space Zelem is leaving. By pushing Wälti on, Arsenal have taken Toone out of the high press too. 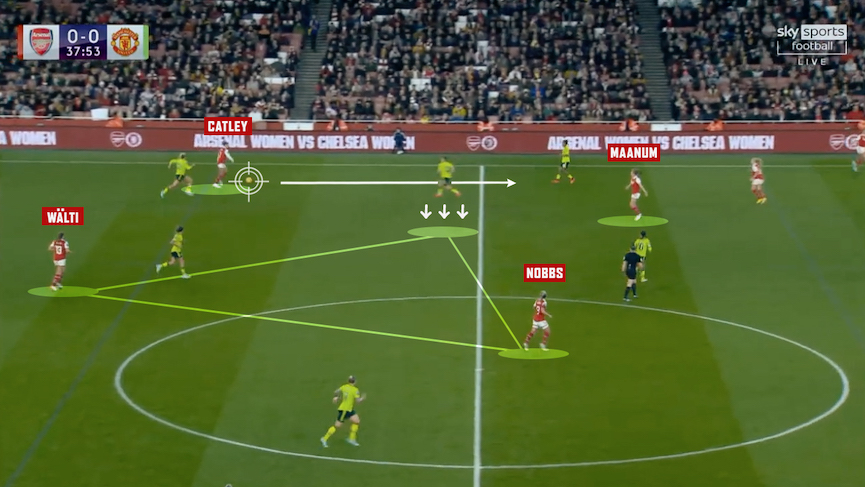 Here we once again see that “wonky triangle” in midfield. Ideally Maanum should already be in that space to Catley’s right to receive the ball. That would give Arsenal’s midfield a better spread with Wälti at the base and Maanum and Nobbs on a parallel line so that they can find one another. Instead, Maanum has pushed on slightly early so she is travelling back into space from an advanced position. Catley tries to clip the ball down the line but United win it back. 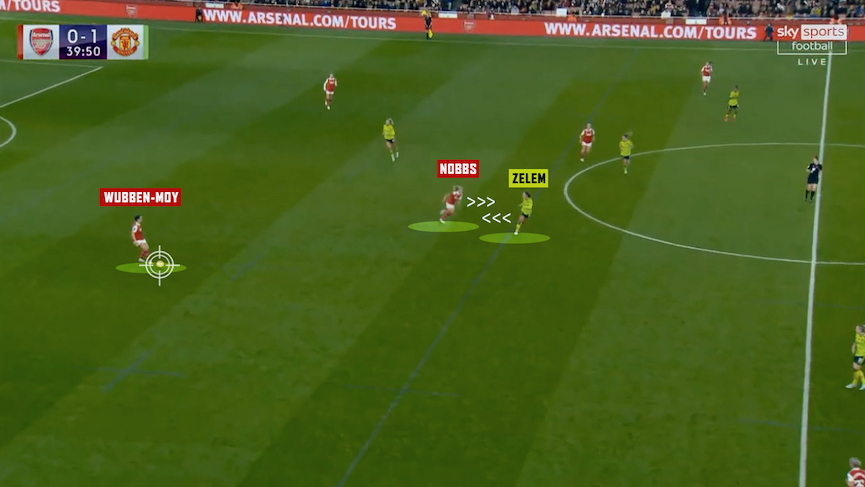 From kickoff after United take the lead, Nobbs again drops deep to play a one-two with Wubben-Moy. Instead of holding position and Arsenal gaining some control over the ball, Nobbs is eager to push on, especially as she can see that she has attracted Zelem towards her, leaving space in behind. 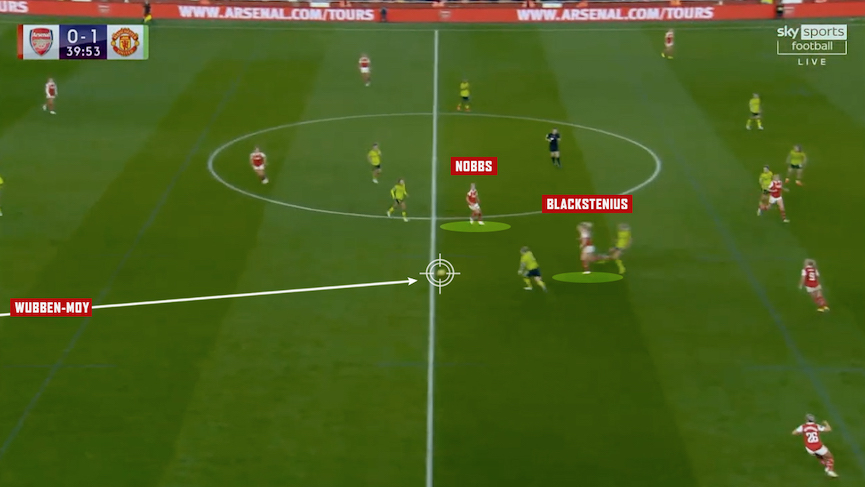 But it means that Wubben-Moy is left too much to do with the pass and she can’t reach Blackstenius and United have possession again straight away. There’s no escaping that Arsenal missed Kim Little’s ability to take the ball under control in tight areas and regulate the temperature of the game. 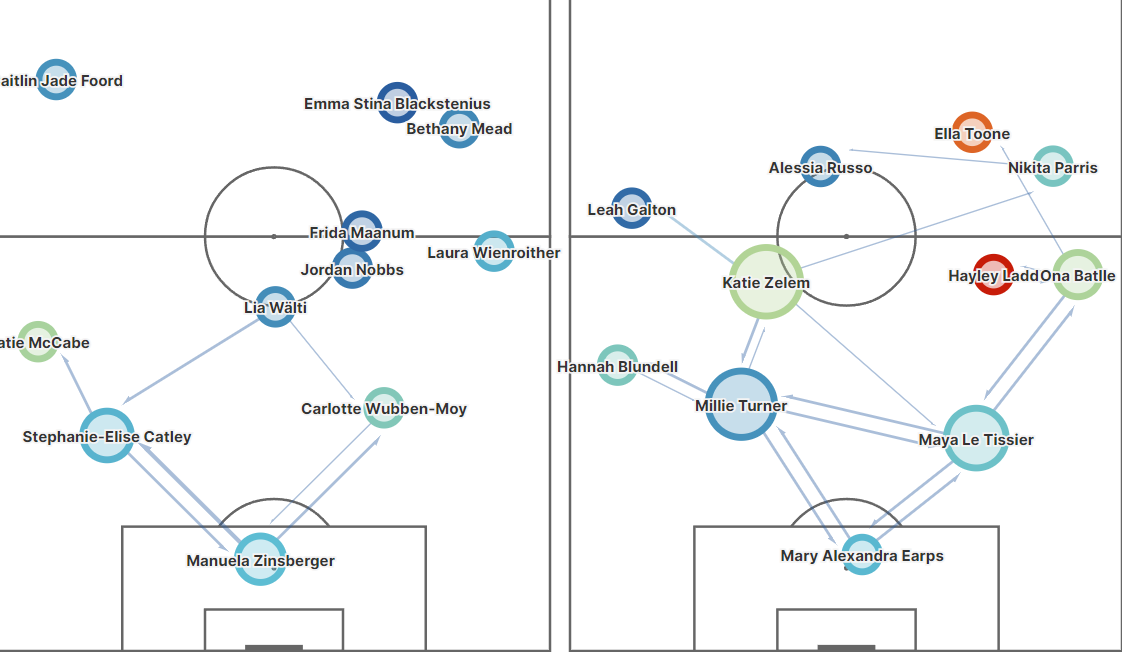 Look at the Statsbomb pass maps from the first half. Arsenal don’t have the pitch coverage that United do, Nobbs and Maanum are on top of one another and none of the midfielders or attacking players are connected at all, only the back four and Walti have connecting lines.

When Maanum does score the equaliser right at the beginning of the second half, the difference this time is that she starts her run from deep and advances rather than being at the tip of the arrowhead as soon as Arsenal build the play. 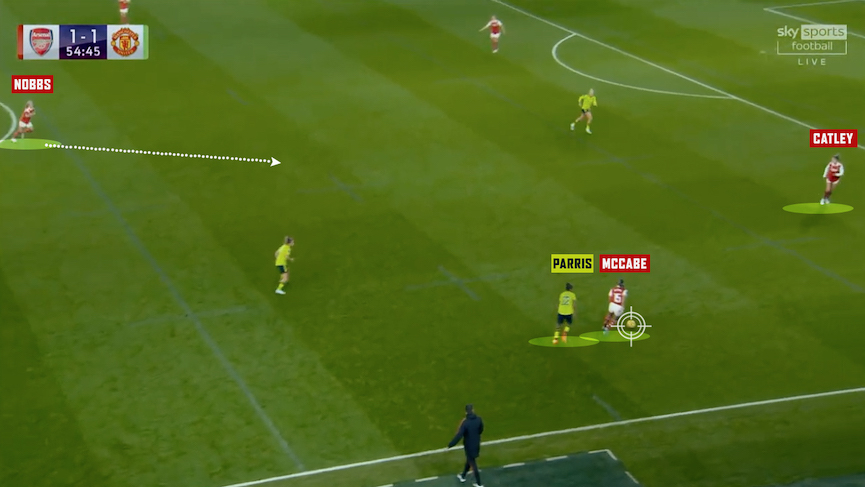 Technically, Arsenal were still quite scrappy in the second half but they raised the intensity and their spacing got better. Look here as Nikita Parris boxes McCabe in at left-back. Nobbs senses the danger and drops into the space. Catley is looking over to her and can see her in case she is needed. 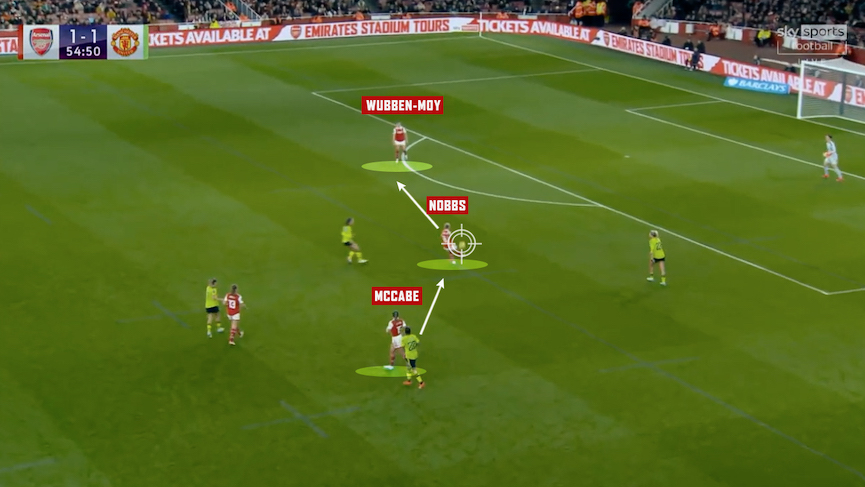 McCabe finds Nobbs, who is able to lay the ball off to Wubben-Moy and Arsenal can build. Too often in the first half, that midfield space was neglected forcing Arsenal to go long and lose the ball. 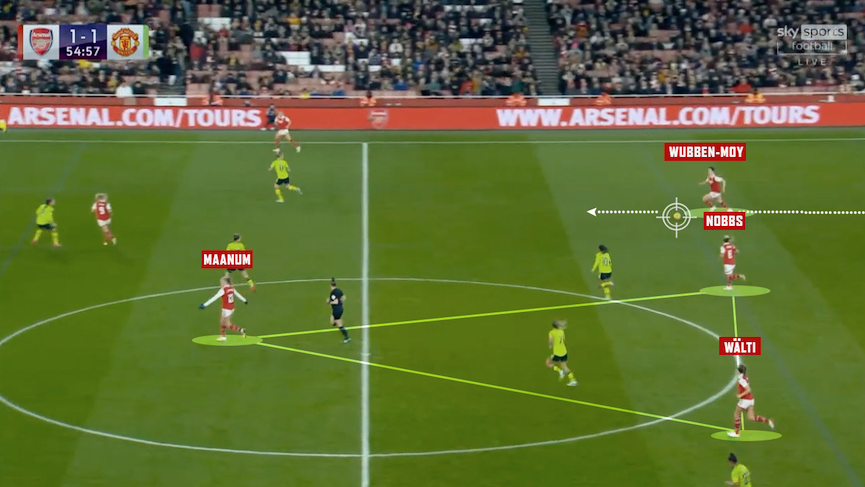 As Wubben-Moy drives the ball forwards, look at the shape of the three midfielders now. It’s a triangle and it’s no longer a wonky one. Lotte ends up driving the ball to the edge of the United box. Nobody engages her and a lot of that is because she has better options to pass to that United’s players can’t leave unattended. 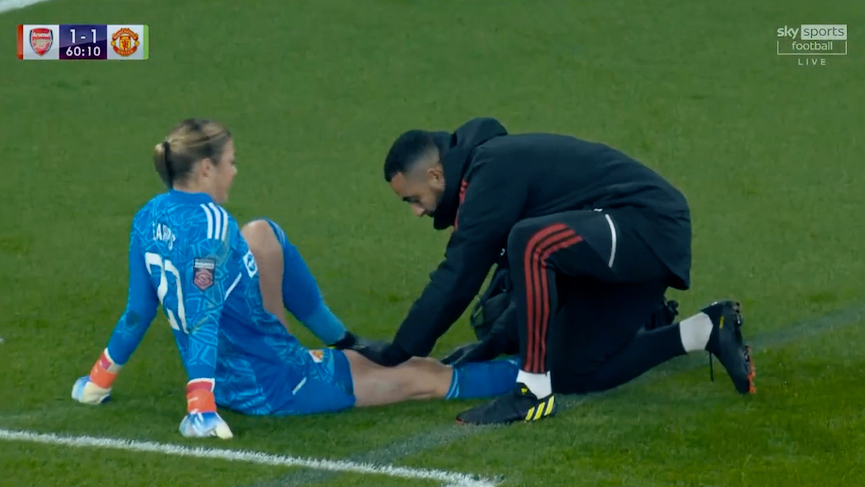 That’s just one small example and you could tell that United weren’t happy with how things were going in the second half because Mary Earps got a case of the Zinsbergers and went down for treatment under absolutely no challenge whatsoever so United could call a mid-game conference. 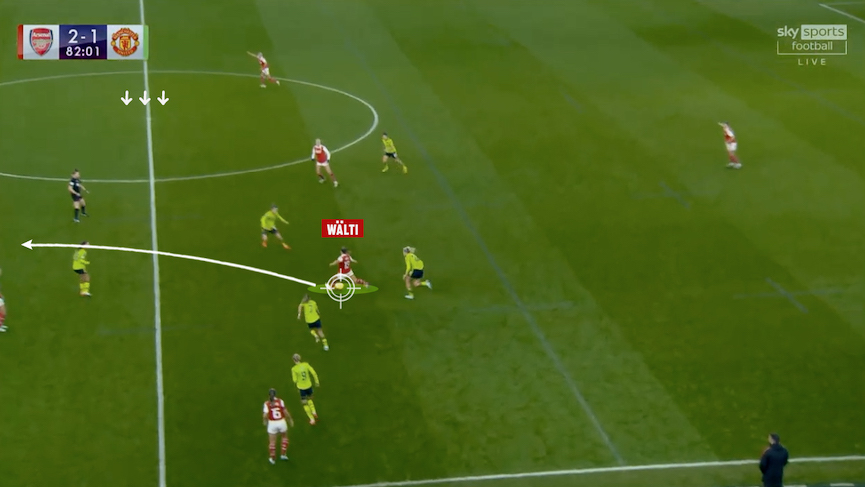 At 2-1 Arsenal still couldn’t control the temperature of a fraught, slugfest of a half. United do well to pressure Wälti in possession but the centre circle is virtually empty, meaning she has to go long. 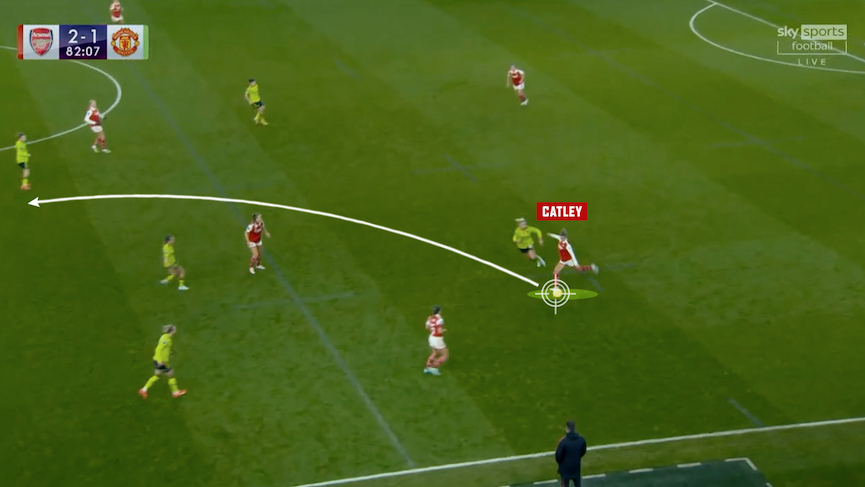 United clear the ball and it comes back to Catley, who again opts to launch it towards Blackstenius, who commits a foul. 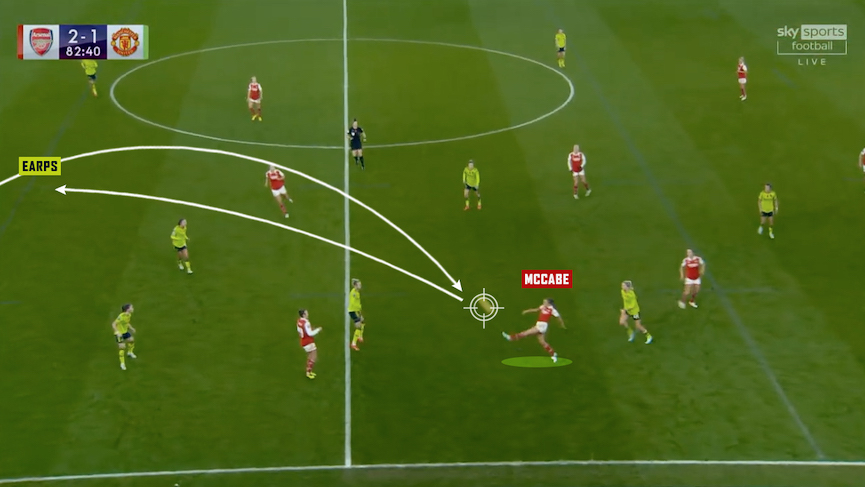 Earps’ subsequent free-kick is headed towards the touchline and McCabe smashes it downfield and straight back to Earps. In this part of the game, Arsenal should have been prioritising control of the ball and taking the temperature of the game down. 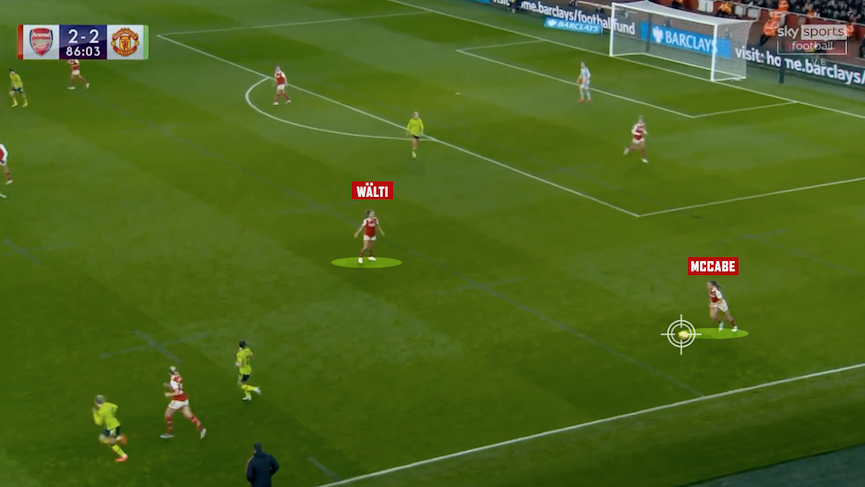 Straight after United’s equaliser, Katie McCabe wins the ball back at left-back and has an easy pass in-field to Lia Wälti to build play. 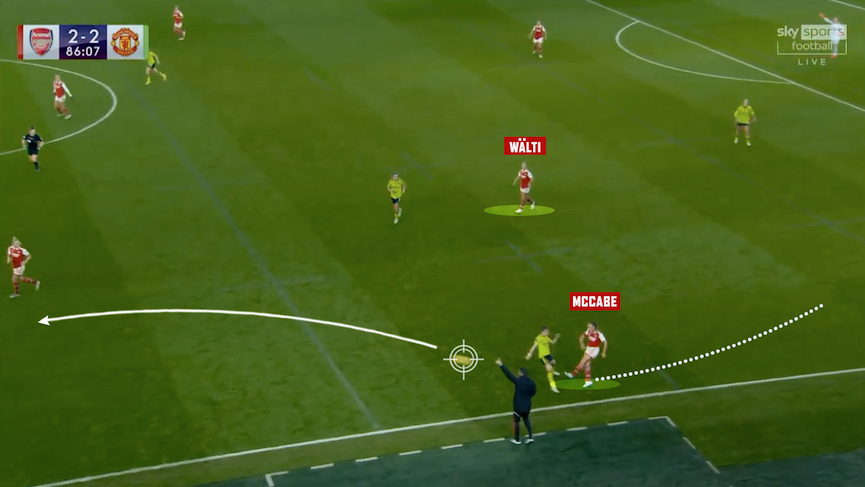 McCabe opts to travel up the line and, in lieu of other options presenting themselves at that point, again kicks long. 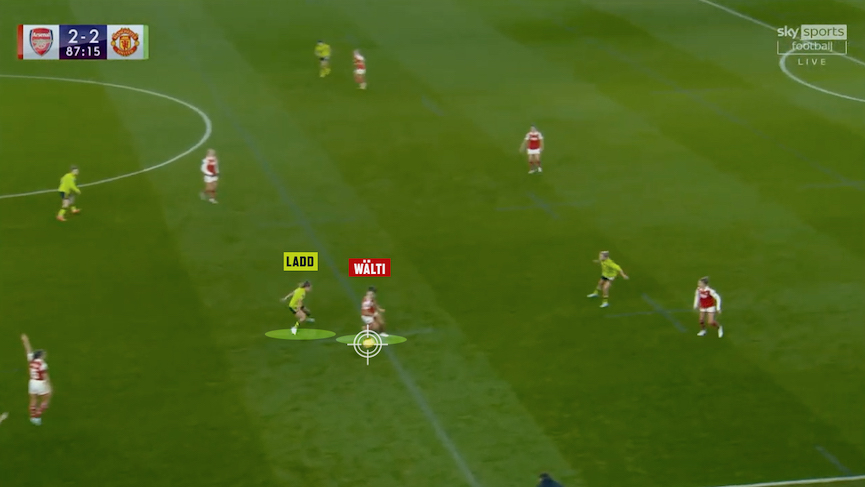 Here we see Lia Wälti’s trademark ‘snake hips’ turn to take her away from Hayley Ladd. 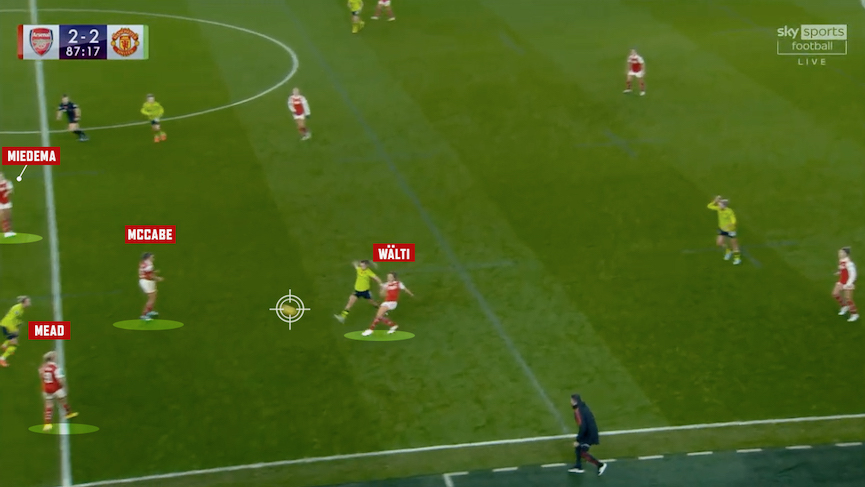 But again, Arsenal’s spacing is poor. Miedema, McCabe and Mead are all on top of one another. Wälti goes long and United have the ball back again.

Arsenal’s spacing in the first half allowed Manchester United to dominate the opening 45 minutes. They improved enough to turn the second half into a slugfest but could not assert any sort of technical control. Having got themselves 2-1 up, they also couldn’t drop the temperature of the game by getting on the ball and keeping it.