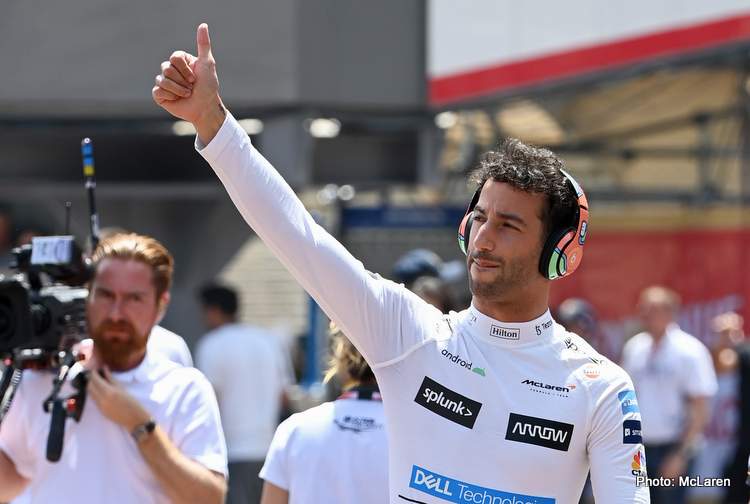 One of the big talking points of the 2022 Monaco Grand Prix was the continuous downfall of Daniel Ricciardo, the Australian enduring another woeful weekend that has put his Formula 1 future in question

Not helped by big-mouth Zak Brown blabbering away to the media from the safety of 100 miles, extending Pato O’Ward who has F1 ambitions and talking up Colton Herta as the next American in the top flight while the McLaren boss attends the Indy 500. Not good listening for the underfire Ricciardo.

This is not a guy that has forgotten how to drive race cars fast, but rather one that’s motivation has perhaps softened since he departed Red Bull, banked a healthy retainer from Renault and ditto McLaren. But he is simply not worth the money because Lando Norriss is showing him up.

How is this for coincidence? In 2014 after a couple of years at HRT and Toro Rosso, Dan stepped up to partner Sebastian Vettel at Red Bull, the German on a four F1 title streak, and sent him packing to Ferrari. The new hybrid F1 cars that came on stream that year were to blame, he simply could not drive the RB10 like the Australian could.

Ricciardo finished third in the drivers’ standings that year, and Vettel fifth a distant 71 points adrift. That was a hiding from which it can be argued Seb never recovered and Dan’s shares soared. Until Max Verstappen did a ‘Ricciardo’ on Ricciardo until he went off to Renault.

Last year at McLaren he won for them at Monza, his best weekend by far last year, after Lando was told to hold station, but apart from that the younger driver tended to have the better of the Aussie. Same thing this year, the new cars have not been kind to Ricciardo. And he knows it.

Ricciardo: I will continue to smile or at least try but deep down I’m disappointed

Speaking to reporters after finishing 13th in Monaco on Sunday, having crashed in FP2 a couple of days earlier, while Norris played at the sharp end to finish sixth, Ricciardo said: “Obviously, a tough weekend to take, unfortunately, I’m experienced with these – had a few of them the last 12 months, so I feel like I can handle them a little bit better.”

“It’s tough. I mean, no mistake, Monaco you need confidence. You need to be at one with the car; for sure if you’re not quite there it can show on the stopwatch. So as much as I love this place, at the core, that’s what you need,” explained Ricciardo.

But the truth is that the 2018 Monaco Grand Prix winner is in pain: “I will continue to smile or at least try to smile but deep down I’m obviously disappointed but yes, I’ll look at it now, debrief and whatever – but just probably take a few days off.

“I’ll say there is still some stuff to get on top off, and obviously it’s been a while now, so I wish it still wasn’t the case, but I think the reality is that. I think there will be some tracks where it just clicks from the first practice and where good, but I think I’ll expect to probably still work at it and try to keep trying.

“Try to keep trying, that’s it, I won’t go down without a fight but of course, I don’t wish to be fighting for 13th. [I’ll] try to get back in the points soon.”

As for his post-Monaco plans with a rare weekend before next Sunday’s 2022 Azerbaijan Grand Prix, Ricciardo said: “I have a few friends here and try to just enjoy some moments away from the track and then reset for Baku.”

Heading to Round 8, Ricciardo lies 11th in the 2022 F1 world championship standings with 11 points, while teammate Norris is seventh on 48. McLaren are fourth in the constructors’ standings.