THE LOWDOWN
Arsenal face bottom of the league Birmingham City at Meadow Park on Sunday with the aim of putting an eight-point gap to Chelsea at the top of the WSL table. Chelsea are not in league action this weekend as they play Manchester City in the Conti Cup Final on Saturday evening. The Blues will have three games in hand on Arsenal by Sunday evening.

The title would still be in Chelsea’s hands but the gap would put them under pressure to win each of their games in hand. However, the Gunners cannot get ahead of themselves. They lost the reverse fixture to Birmingham in January in, possibly, the all-time shock result in the WSL. Those three points conceded at St. Andrews remain the only points Brum has won all season and the only game Arsenal have lost.

New: ‘She is the most explosive player in the league’ Eidevall talks up Miedema’s pressing contribution https://t.co/oEGeIJZt7C #arsenal #afc pic.twitter.com/pWWi3x8RqS

On that January afternoon Arsenal turned in one of their worst performances in living memory. Coach Jonas Eidevall said his side would be “pretty foolish” to underestimate the visitors given recent history, adding, “If you don’t learn from your mistakes, that makes you stupid.” However, his side have improved markedly since that day and have been on top form in recent games.

They made very short work of Reading on Sunday and Liverpool the previous weekend, winning both games 4-0. Eidevall has a lot of selection headaches ahead of this game, he will want to rotate the side but there are a lot of players playing some of their best football of the season at the moment and it’s going to be difficult to rotate them out.

TEAM NEWS
Jonas Eidevall says that Nikita Parris missed out on Wednesday’s game against Reading due to a “small injury issue” and doesn’t know yet whether she will be available for Sunday, Lotte Wubben-Moy is available and will return. Arsenal have no other injuries at the moment.

A WORD FROM THE BOSS
“We would be very foolish not to see them as a dangerous opponent given how the game turned out last time. For us, talking is cheap, action is what matters and we have to prove that on Sunday. That’s the only thing that matters. It’s probably the most disappointed we have been since I came here but it is part of the game.

“It happens in football, it has happened to me more than once in my career. There were a few times I won the league in Sweden with Rosengard and lost to the team that finished last in the table, it is weird but it has happened. It happens at all levels, it is more a matter of how you go on after that game, that is important, that’s what defines you.”

LAST TIME OUT
The Gunners lost 2-0 at St. Andrews in the reverse fixture with first half goals from Libby Smith and lifelong Arsenal fan Veatriki Sarri. In this fixture last season, the Gunners overcame a rare penalty miss from Kim Little in the first half to win 3-0 with goals from Caitlin Foord, Jill Roord and a late Kim Little penalty which was converted.

THE OPPOSITION
The game very much looks up for Birmingham when it comes to surviving in the WSL for another season. They finished 11th last season just above Bristol City but now they trail Leicester City by eight points at the bottom of the league having played the Foxes twice. It will take an almighty turn around for the Blues to avoid the Championship.

Given the club’s underfunding of the women’s team over the last few years, relegation has felt like an inevitability for a little while now. Last season, the players wrote an open letter to their owners complaining about conditions. It felt a little like the ownership wanted relegation last season to ease the cost of supporting a fully professional WSL outfit.

During the summer, highly rated coach Carla Ward and exciting young goalie Hannah Hampton both left for Aston Villa. Former Glasgow City boss Scott Booth was appointed but only survived until November citing broken promises from the board over reinforcements. Former men’s team midfielder Darren Carter is now in the hotseat but Birmingham do look doomed, regardless of Sunday’s result, which feels like a massive shame given their stellar recent history in women’s football. However, Sunday will reunite Arsenal fans with WSL title winning centre-half Louise Quinn, who captains the Bluenoses.

Both of Blackstenius’ goals have come at Meadow Park and they have both been teed up by Miedema and that is a pattern everyone connected with Arsenal would be delighted to see continue on Sunday. With Miedema in the 10 position and taking the ball into feet, Blackstenius remains in the final third to give Arsenal constant penalty box presence.
Stina runs the channels, holds the ball up and attacks the six-yard area in the style of a more traditional nine, freeing Miedema to drop into pockets of space and combine in deeper positions. It is a combination that has worked incredibly well to this point and has given Arsenal’s approach a freshness, not least because of Blackstenius’ industriousness in the press, too. 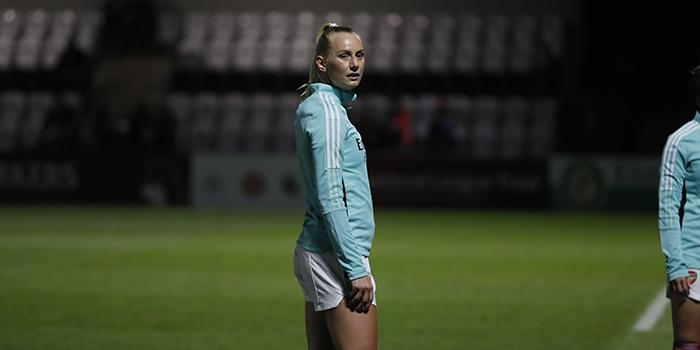 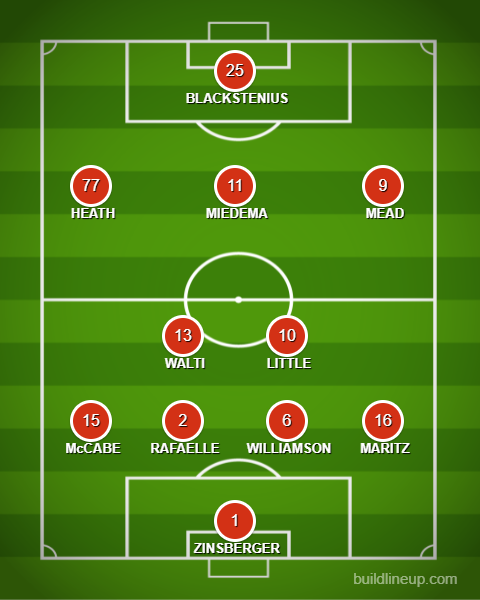 HOW TO CATCH THE GAME
The game takes place at Meadow Park on Sunday at 12noon. Tickets are available here for £8 adults and £4 concessions until 2359 on Saturday evening. Otherwise, you can buy on the gate for £12 adults and £6 concessions. The game will be screened live on BBC Two in the UK. Check your local WSL provider if you are not in the UK.