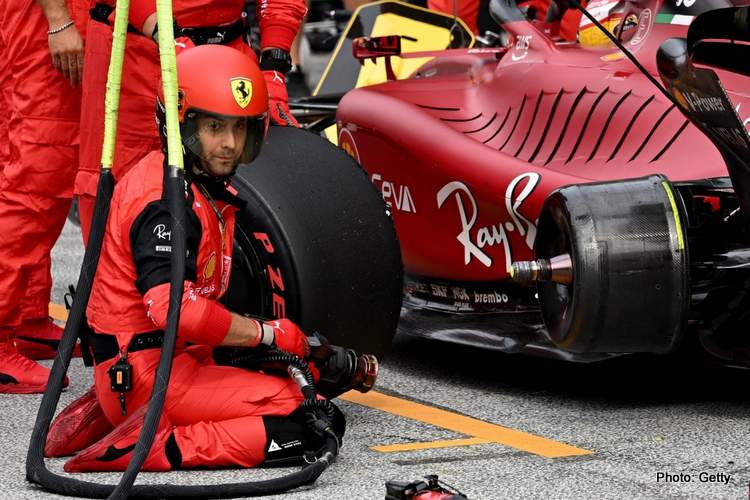 Mattia Binotto tried to justify Carlos Sainz’s botched pitstop during the 2022 Dutch Grand Prix, claiming the call to pit was too late, the team not having enough time to react.

Carlos Sainz’s race was ruined after a 12.7s stop after which he could only recover to fifth, from which he was relegated to eighth due to a five-second time penalty for unsafe release on his final pitstop.

But Ferrari also seemed to be lacking pace during the grand prix at Zandvoort, as they were struggling to keep up with the Mercedes, let alone fight Red Bull and Max Verstappen for the win.

Mattia Binotto reflected on the race, and was quoted by Formula 1’s official website saying: “If you look at the quali pace of yesterday, we were hoping for a better result today.

“But the speed and the performance today was not great for all the race long, especially on the medium and the hards, which is something that has somehow affected our result.

The pace not good enough over the past three races

“A bit unlucky maybe with Charles at the pit stop under the Safety Car because he just pitted,” he added. “But I don’t think that would have been enough, so simply not as good in terms of now it’s three races in a row [where Ferrari have lost out], from Hungary, from Spa, here.

“I think we are not exploiting maybe the full potential of the car, there is something wrong that we need to address,” Binotto admitted.

“In Hungary we were not quick enough and maybe we need to simply to review our packages that we introduced, or maybe in the way that we are balancing our car today,” the Ferrari chief reflected.

“I think that the potential of the car can be high, it has proved to be higher since the beginning of the season, but right now it is not the case anymore.”

Looking back on Sainz’s pitstop, Binotto downplayed the error saying it is easy to fix: “I think if I look at today, simply the call was too late a call, so we had no time to react.

“All these things need to be fixed, but these ones are the easiest to be fixed,” he insisted. “So at the end, they happened; they should not happen, I’m pretty sure that we can be stronger in the future. So, I’m less concerned by that than the pace of the car.”

Ferrari now head to their home race at Monza next weekend, where the pressure should be multiplied on the Reds to deliver a decent home race to their Tifosi.

“Now we go to Monza where we can expect a warm welcome from our tifosi,” Binotto said. “We know we can always count on their support, and it will be great to finally see the grandstands at the Autodromo packed out, after the limitation on spectator numbers last year because of Covid.

“We will do our utmost to make our supporters proud of us, even if we already know it won’t be an easy race, given the performance level of our competitors,” the Swiss-born Italian conceded.