This was worth the wait.

I am very glad that this match was able to go on because it would have been a real pain to miss out on a performance like this. Arsenal return to the top of the table and return to winning ways.

It was a good test of the depth of the squad and they came up big, continuing the very good performances that the team has put in to start the season.

Brentford 0-3 Arsenal: By the graphics 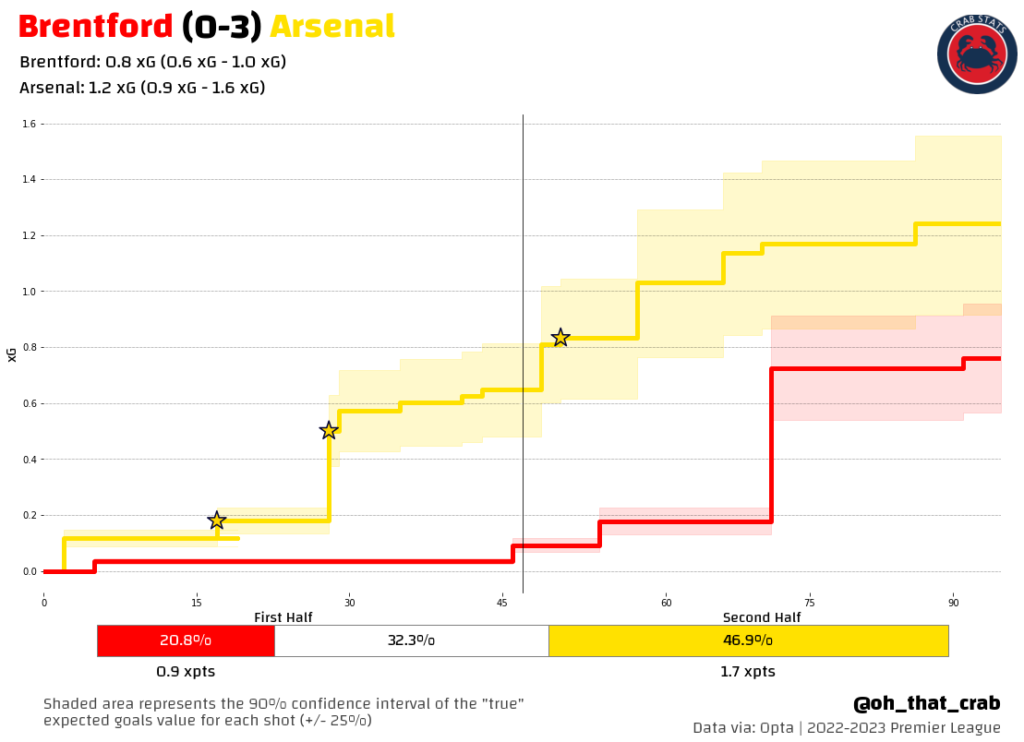 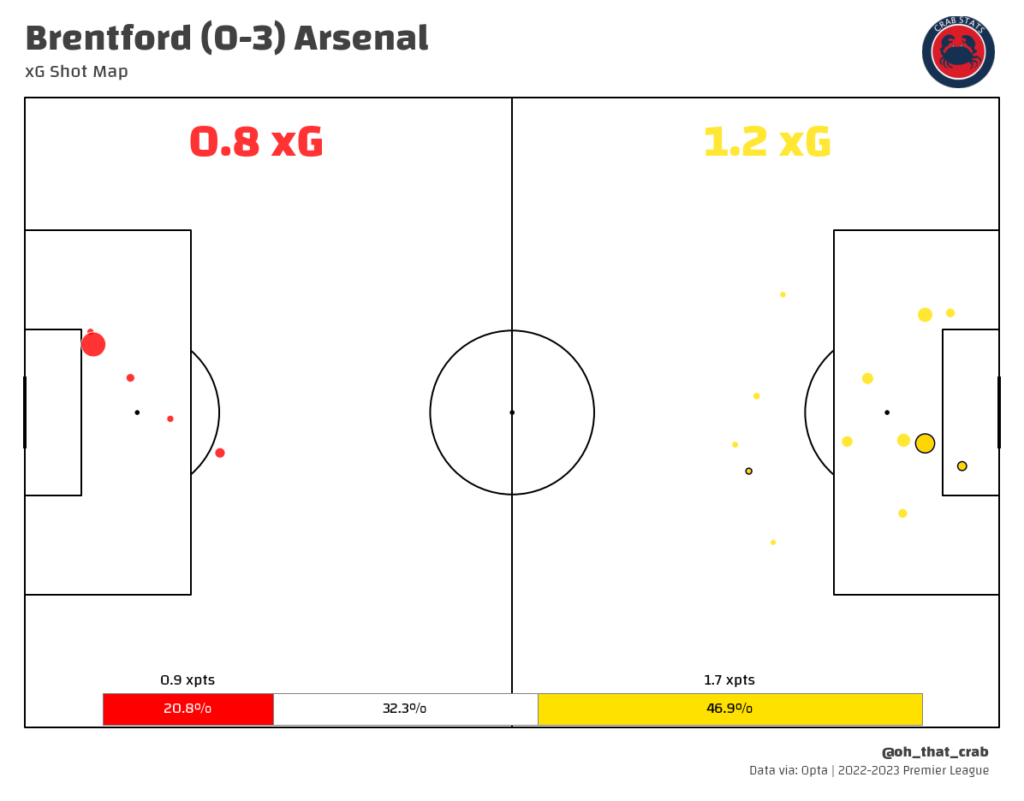 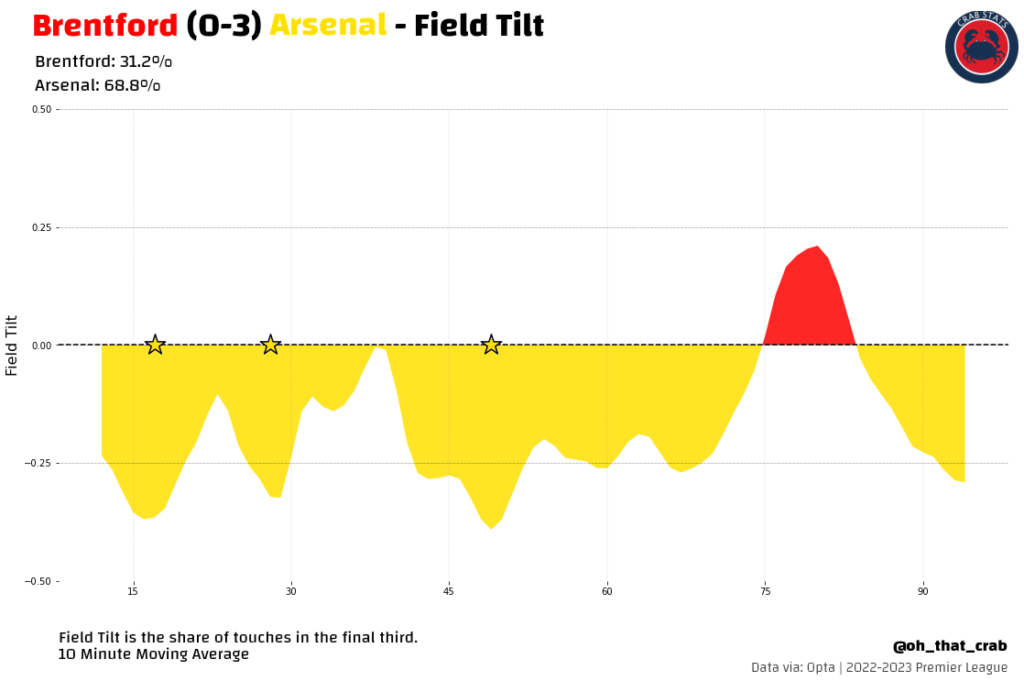 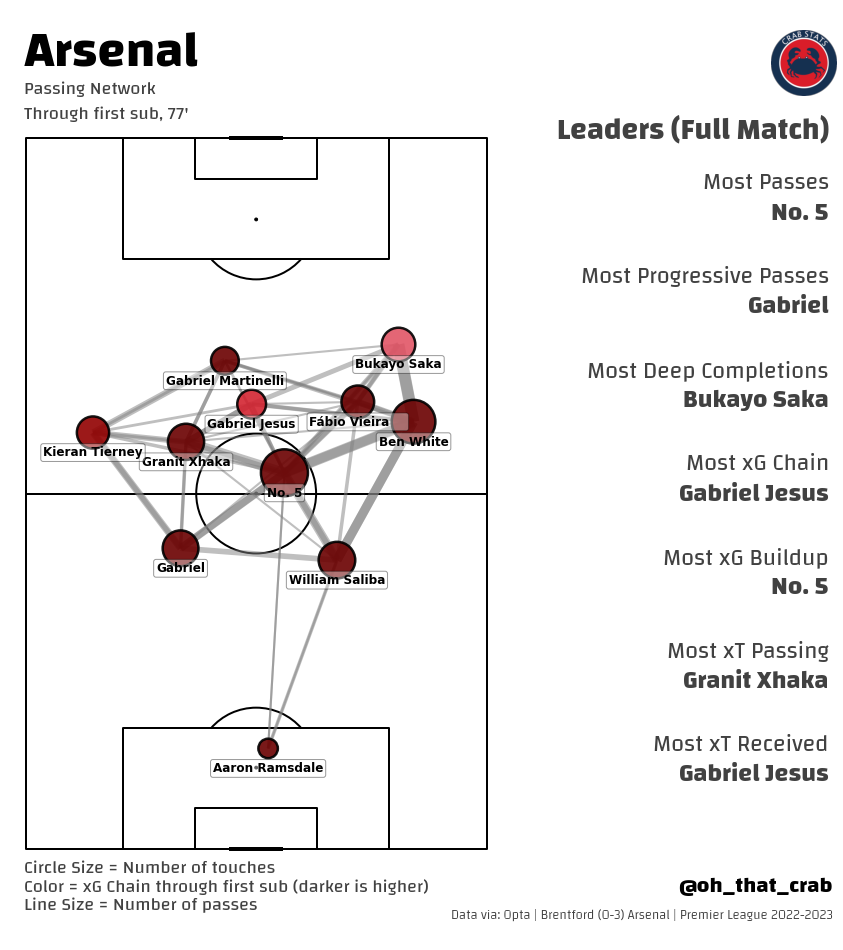 Brentford 0-3 Arsenal: By the numbers 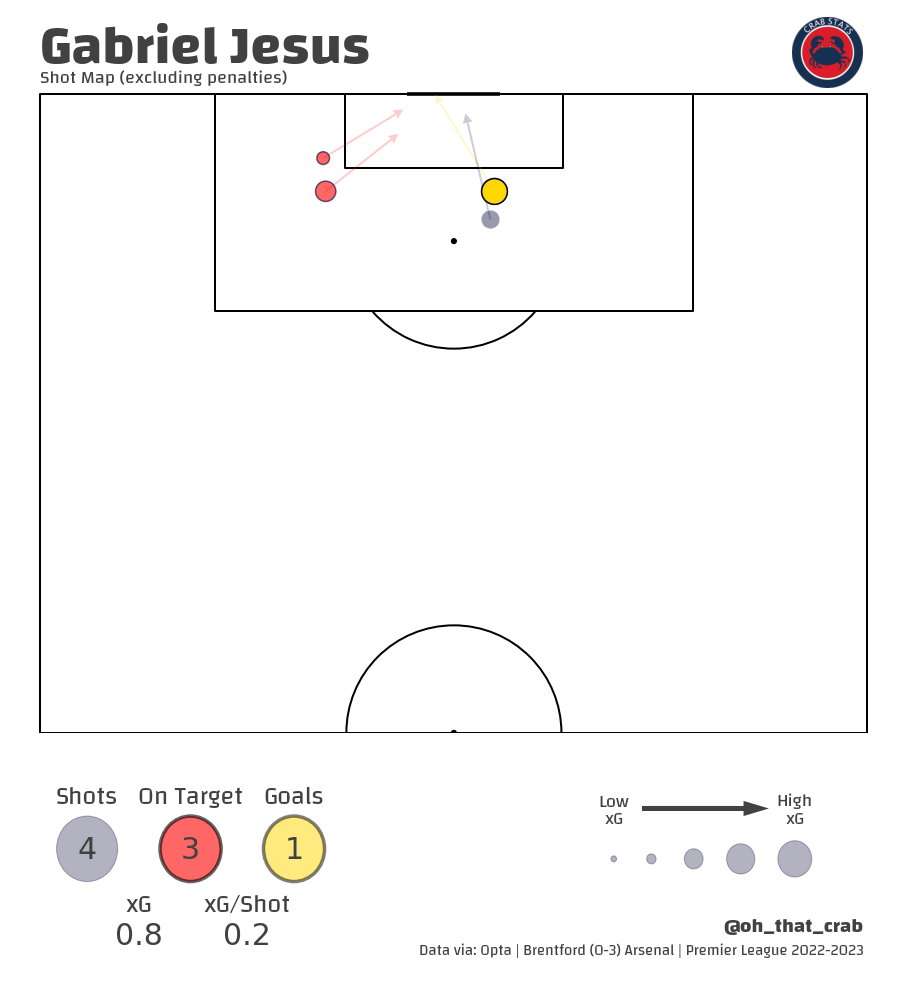 0.02 – The expected goal probability on Fabio Vieira’s goal. What a hit. I love a shot that goes in off the post. 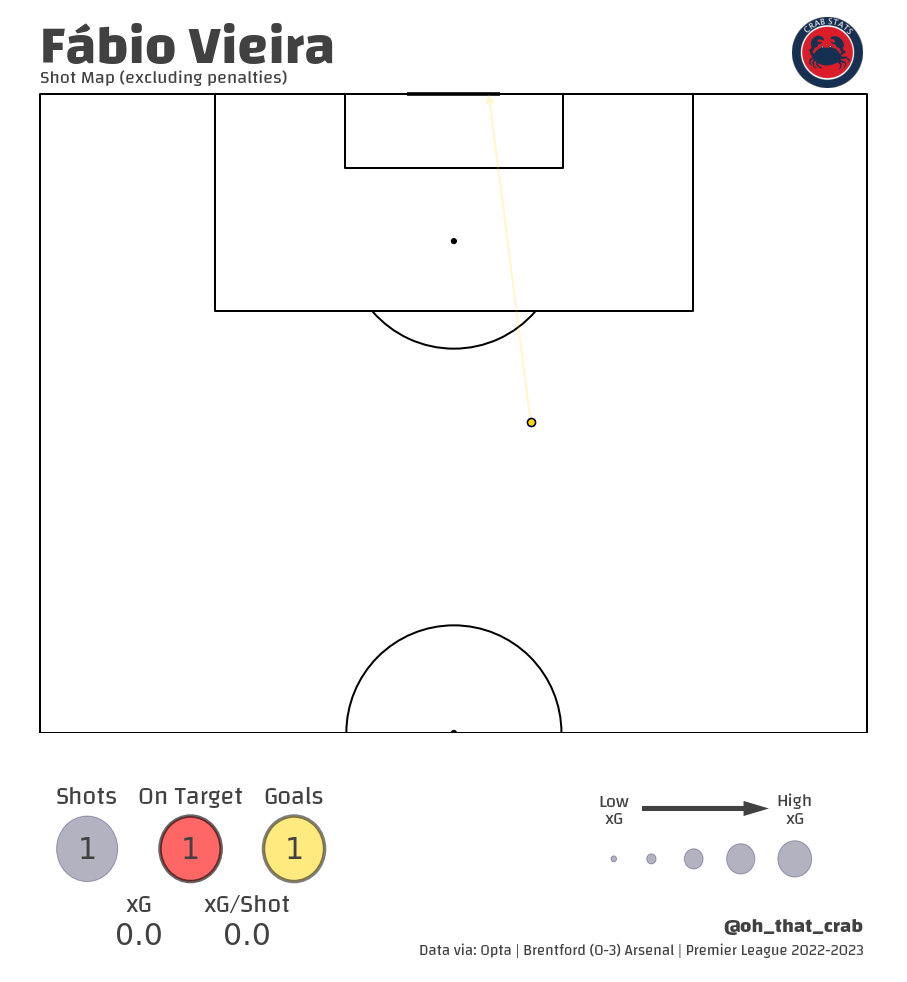 This might be the early leader for goal of the season.

58 – The most touches among Arsenal’s front four, this was Gabriel Jesus

50 – The fewest touches among Arsenal’s front four, this was for Gabriel Martinelli

The front four were very good interchanging, with pretty incredible balance (there didn’t seem to be a noticable tilt to the play from Arsenal today). For all the preaching of how structured Arsenal’s play is in build up, there is quite a bit of freedom to interchange and swap around in the final third.

73 – Passes completed by Thomas Partey, leading all players. Brentford flooded the middle of the field with players but Parety was still able to control and dicatate things bery effectivley even when he was playing pretty close to loan role.

20 – Final third entry passes from Arsenal’s fullback. Ben White was emense with 13, and Kieren Tierney looked very good in a more traditional wide role adding 7 of his own.

I thought the Arsenal full back were very good in this match. After playing a much more inverted tucked in style over the first part of the season, both full backs played wider than we have seen from Arsenal this season. I think that this was a nice tactical tweak from Mikel Arteta to exploit the wide areas that were vacated with the back 5 and 3 player keyed on Partey in Midefield. 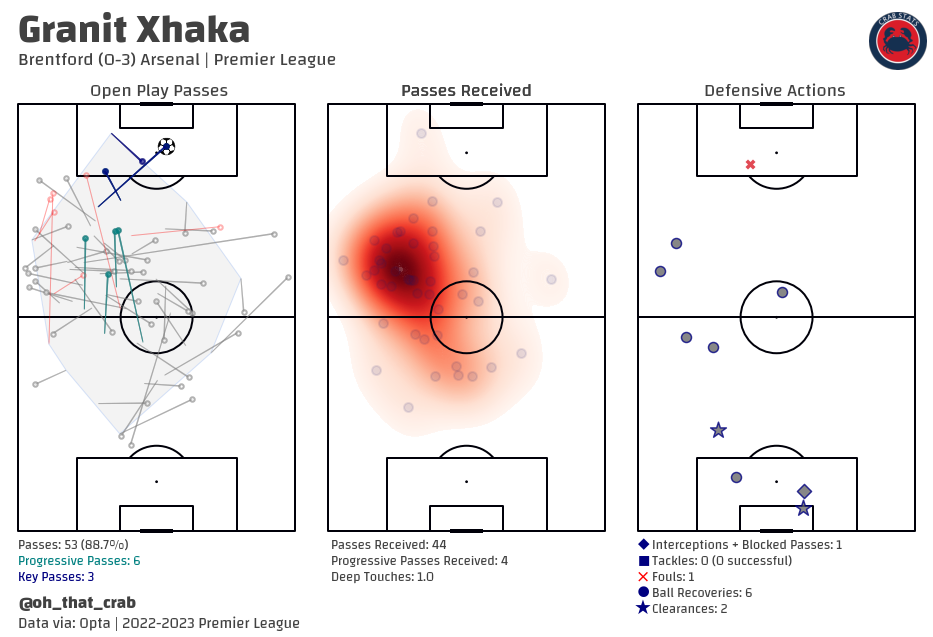 Xhaka had a great match. He did well to help pick up some of the creative slack that Arsenal needed with Martin Odegaard out. He assisted in midfield well, taking up some of the positions that you would normally see Zinchenko take up. He also played one of the best passes that you will ever see to assist the second goal. I will readilly admit that I did not see this level to his game but I am glad that he has repaid the faith placed in him.

Arsenal got out to a quick start in this one and then never really let up. This is a solid sign, with Arsenal getting almost Manchester CIty levels of match control in this one.

The buildup to Arsenal’s second goal 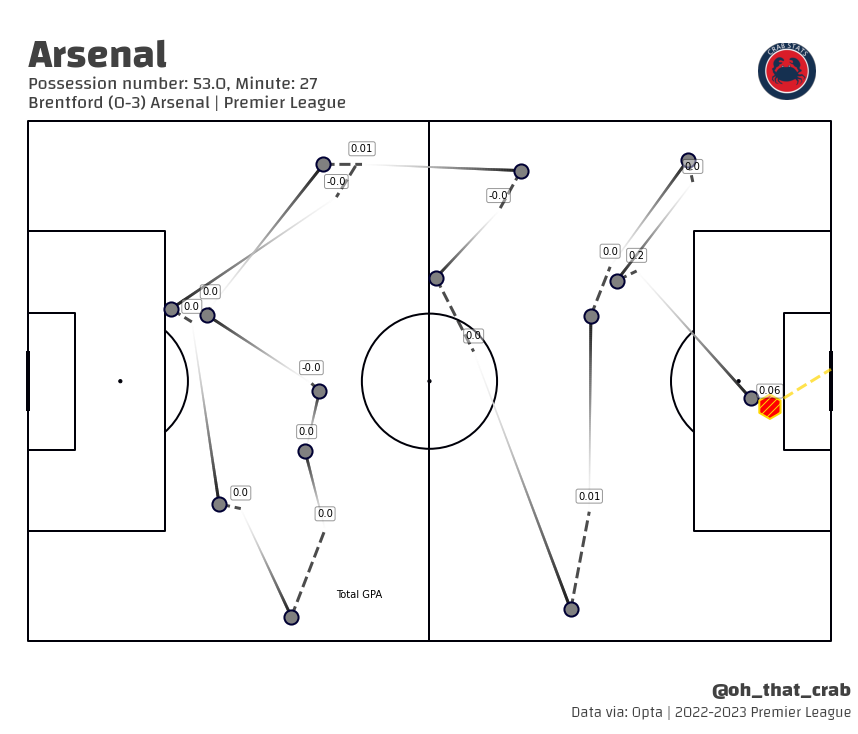 The buildup to Arsenal’s third goal 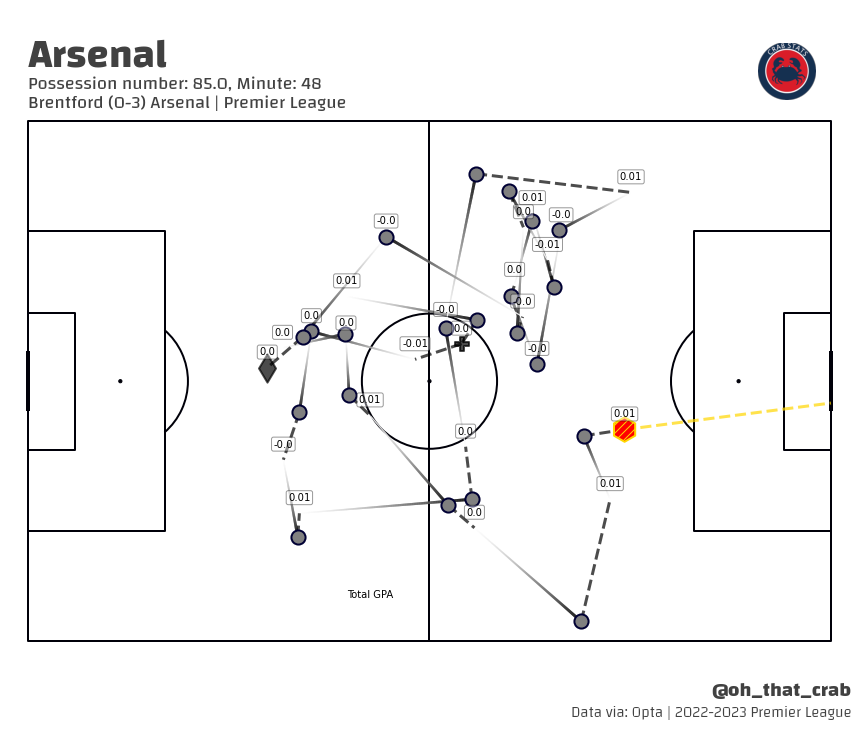 4 – Shots allowed by Arsenal in this match. This is tied for the fewest they have allowed this season and the 6th time this season Arsenal have held an oppoenent to 10 or fewer shots (the only time they haven’t they allowed 11 shots).

52 – The total number of shots that Arsenal have allowed this season, second fewest in the Premier League

62% – The percentage of Brentford’s passes that started in their own half.

34% – The percentage of Arsenal’s passes that started in their own half.

This has been a bit of a grab bag of stats from this match but I thought that there was a a bunch of interesting good things that I wanted to capture.

Sources: Opta via Whoscored, StatsZone, my own database