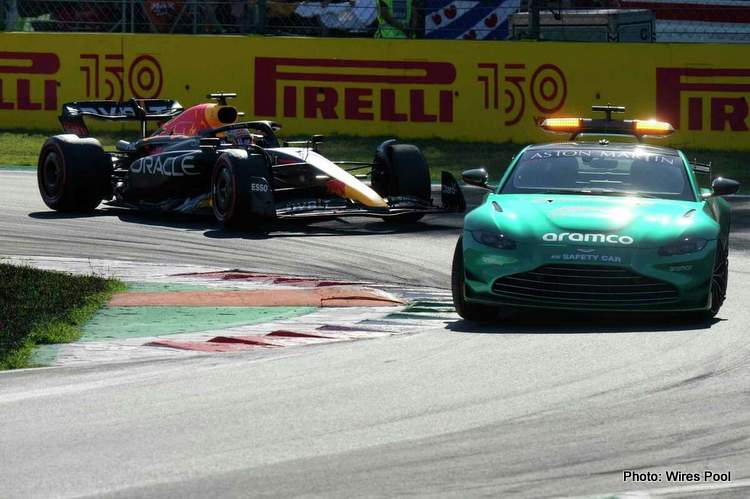 Christian Horner criticized the way in which the 2022 Italian Grand Prix ended behind the Safety Car as despite Max Verstappen’s win, that’s not how Red Bull would’ve wanted it to be.

A late Safety Car (SC) period caused by Daniel Ricciardo’s breaking down with  six laps to go, meant the field got bunched up again after Max Verstappen  was leading comfortably from Ferrari’s Charles Leclerc.

But the stewards took their time in deciding on the SC to start with, and then kept it out too long, deciding to finish the race behind it, when many believed there was enough time to go racing and having a sprint race to the flag, like Baku 2021.

Christian Horner is of the opinion that there was enough time to race, and understood the fans’ frustration for such an underwhelming end to the race at Monza.

“We don’t want to win a race under a Safety Car,” Horner told Sky Sports F1. “It’s something we’ve talked about for many many years, that they should finish racing.

“There was enough time to get that race going. I think they picked up the wrong cars, picked up George Russell,” he insisted.

Horner was confident that Verstappen would’ve won the race in track, saying: “We had the faster car, we would have liked to win the race on the track, not behind the Safety Car.

“We share the disappointment of all the fans, because it took away a grandstand finish,” he added. “It goes against the principles of what we’ve discussed previously.

“The biggest losers were the fans. We need to look quickly to address that,” the Briton continued. “I think they had more than enough time to get going.

“We need to go through details, but for me there was enough time, we had a car that wasn’t in a barrier, it was just by the side of the track,” he pointed out.

Horner later spoke in Red Bull’s post race press release about both his drivers’ races starting with Sergio Perez saying: “Checo had to pit early because there was a flat spot, a lot of vibration, then a bit of debris got into the ducts which caused a small fire, but his recovery from there was great.

“Fastest lap for Checo too so important points for him and the team,” Horner added on the Mexican’s race that was compromised by the brake problems.

“Max was yet again so impressive, even if they had the fastest car, I’m not sure if anyone could stop Max today,” Horner went on. “The whole team has been performing at such a high level all season and our performance all weekend has been brilliant.

“We know we compromised quali slightly yesterday but it paid off,” the Red Bull chied admitted. “More challenges lie ahead with Singapore and beyond so we look forward to that.

“Ultimately it was a somber race for obvious reasons but we are happy we could bring home the win with Her Majesty’s insignia on the nose of the car and we dedicate the victory to the life and memory of HRH, Queen Elizabeth II,” Horner concluded with a tribute to the late British monarch.

Heading out for FP2 at Monza with a special tribute to Her Majesty The Queen Elizabeth II. pic.twitter.com/2fLwTTWkcT