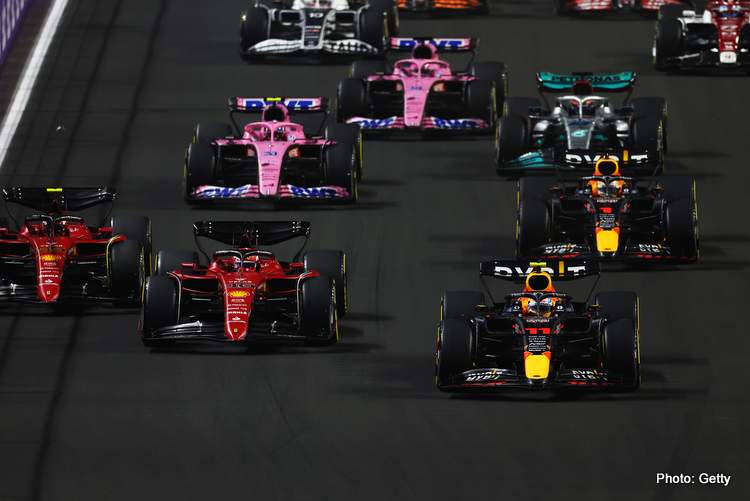 The weekend of the Saudi Arabian Grand Prix was held in an atmosphere of anxiety, controversy, and uncertainty; not the ideal setting for a Formula 1 race, but the sport pulled through, delivering a thrilling race despite the adversity.

No one had imagined having to report about a missile attack on an Aramco oil facility, within sight of the Jeddah Corniche Circuit on Friday, instead of going on with our usual business of covering the second F1 weekend of the 2022 season.

But it is what it is, and we, unfortunately, found ourselves in this regrettable situation, which served to remind us that outside our glamorous sport, a world with war, poverty, injustice, and misfortune exists.

I’d like to believe that being an avid F1 fan, trying to focus on our beloved sport – while promoting it and reporting its activities – is not a form of burying our heads in the sand, but rather a way of looking at things with a “glass-half-full” perspective, trying to focus on the better things in our world.

The decision to press on with the Grand Prix in Jeddah might have been contractually and financially driven, but again, with the half-filled glass in mind, I would like to believe that F1 has played a role in distracting us from the adversities we face in life, albeit for one weekend.

Having said this, let’s try to extract a few Takeaways from the Saudi Arabian Grand Prix. 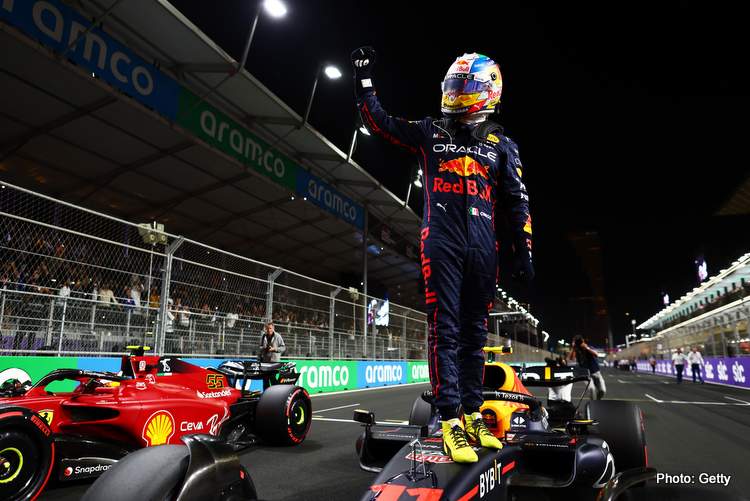 Saturday was Sergio Perez’s moment to shine, and shine he did. The Mexican stole pole from Max Verstappen and Charles Leclerc.

Great as Checo’s lap might have been, but there was this lingering feeling that it was more of a Verstappen/Leclerc underachievement that gave him pole on Saturday.

Don’t get me wrong, Perez has started this season closer to his teammate on pace, a great achievement, but him gaining two tenths on Verstappen doesn’t explain pole in Jeddah. Verstappen underdelivered, and that applied to Leclerc, as well as Carlos Sainz who was looking good for pole for a moment there.

Regardless, Perez put together the best lap he could when it mattered, and the others didn’t, hence his first career pole, after 215 attempts. So well done Checo!

On Sunday, Perez was always going to face an uphill task to keep the lead and win the race, with two Ferraris in the chase. He did not put a foot wrong, rather it was Red Bull who fell prey to Ferrari’s bluff at the first round of stops – an uncharacteristic mistake from the Bulls – and put their lead driver on the back foot.

With the safety car coming out when it did, it was game over for Checo, as there was no coming back from that, but he can take solace that he is in a much better place at the start of this season, and just needs to build on that.

Verstappen vs Leclerc, Chapter 2 of many to come 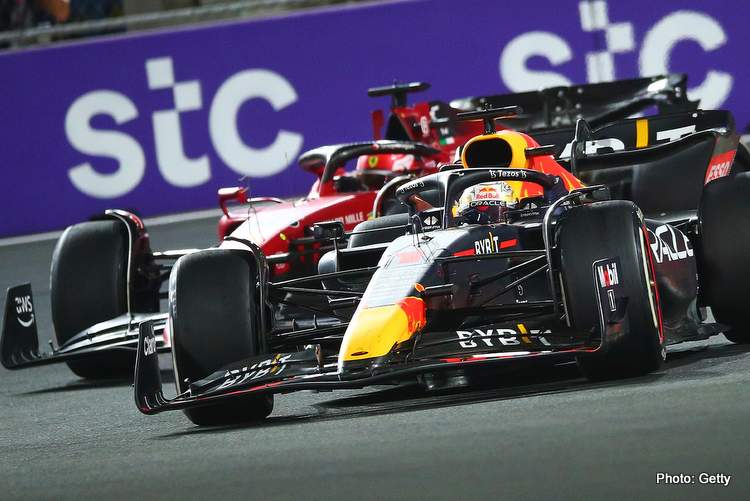 The Dutchman and the Monegasque took another step in Saudi Arabia towards creating the “Rivalry” of the 2022 season. Both showing to be favorites from the moment they hit the track in FP1, with nothing there separating them in terms of performance.

Leclerc and Ferrari were strong in sector 1, Verstappen and Red Bull in 2 and 3, but over the whole lap, the F1-75 and RB18 were closely matched, a deja vu from last season, as to how the RB18’s predecessor’s (the RB16B) stacked up against the W12, when Mercedes was the energy drinks outfit’s rival.

Leclerc was brilliant all weekend, with pole going away from him being the major hiccup, as he couldn’t find enough pace to improve on his final Q3 run. Was it the new set of tyres? How the track evolved that prevented him from putting it on pole? It may well be.

Verstappen was overdriving up until qualifying, and honestly, he underdelivered in Q3. Was that lap from 2021 haunting him? Or was he overwhelmed by the formidable pace of the Ferraris? Could be a bit of both, but nevertheless, he dropped the ball on Saturday.

In the race, Leclerc was going strong, Ferrari also impressive strategy-wise, bluffing Red Bull with their first pitstop, but Max Verstappen was less erratic, more calculating, and the way he hunted down Leclerc after the Virtual Safety Car period was a pleasure to watch.

But the tussle that followed, was the real climax of the race. It was impeccable race craft, smart racing as Verstappen called it, blockbuster stuff that the two young racers delivered, and it was Verstappen that came on top, but congrats for both of them on a masterful performance.

The young guns are taking over the scene in F1… 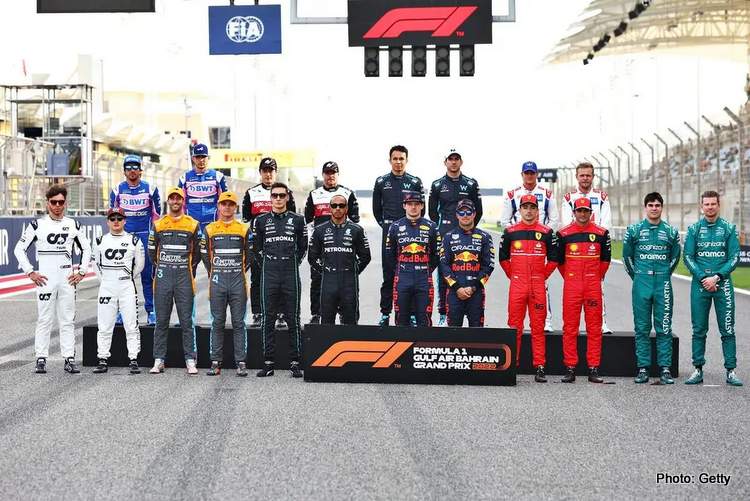 Let’s face it, the tension in the atmosphere was palpable around the Jeddah paddock ever since the events of Friday, and many drivers and team staff wouldn’t have been feeling easy about pressing on with the race, hell even some cars didn’t want to race, breaking down before and during the race. Sorry for this “tongue-in-cheek” bit if some deem it inappropriate.

Mick Schumacher’s crash added additional tension, with everyone waiting to get updates on the German’s condition. Thankfully the news was positive and Mick walked away from it, with all credit to F1 safety these days.

But the impact of Mick’s crash was multiplied against the backdrop of serious events off the track. It was a case of “What else is going to go wrong?”

As true professionals, teams and drivers kept their heads down, and got on with the job of racing.

Time for Mercedes to show why they are F1 World Champions 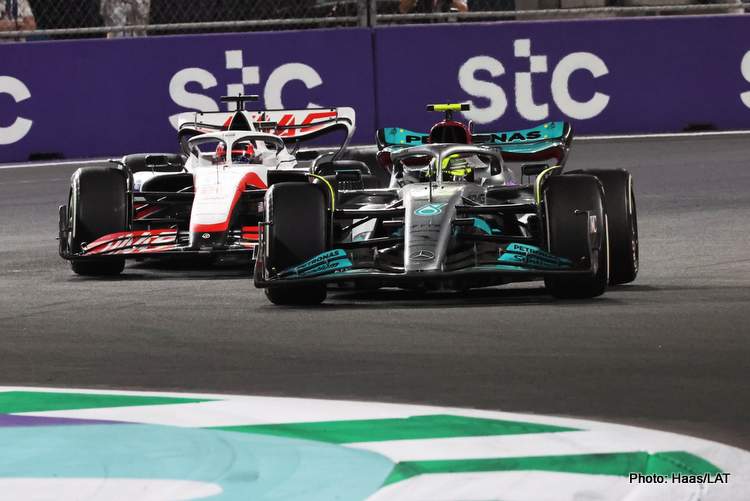 The Saudi Arabian Grand Prix was a humbling affair for Mercedes, with Lewis Hamilton’s Q1 knock out quite the shocker, and taking the final points position in the race cannot be considered as a comeback drive, especially when you are fighting a Haas in the process.

All respect to Haas, but that’s Mercedes we are talking about here!

The team did not have enough time to get major updates for the W13, the first two races being back to back, but they could not even get a better understanding of the car in its current configuration. Not good enough from a team who used to turn a troubled car around between practice sessions.

I am really looking forward to seeing how Mercedes perform in Melbourne in a fortnight, and whether they have answers for the enigma of a car they have on their hands now.

I am convinced they will get the car right. When is the question? How they conduct themselves on their way back to health will be the measure of Mercedes’ World Champion status. But there is no reason why they won’t bounce back.