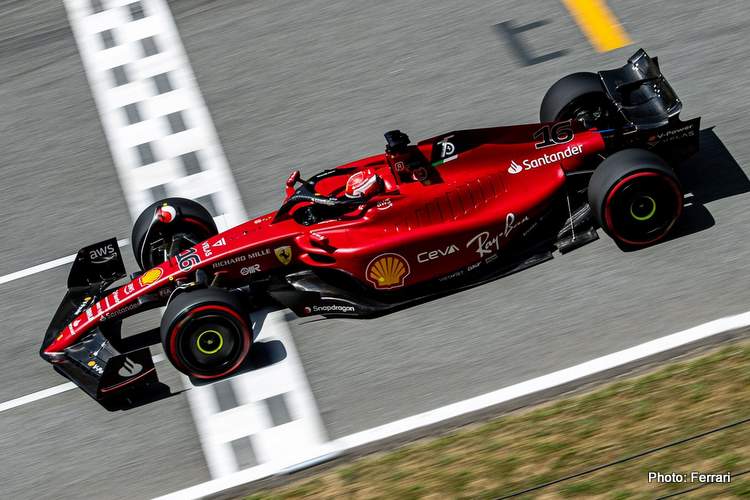 Charles Leclerc ended Friday in Barcelona fastest of all, topping FP2 for the 2022 Spanish Grand Prix, as Mercedes showed some improvement.

However the 2022 Formula 1 Championship leader will have some concerns as it seemed that Red Bull has the advantage on race pace, which has been the case in the last two races that Max Verstappen won in Miami and Imola.

The Mercedes due Goerge Russell and Lewis Hamilton were second and third fastest.

FP1 in Barcelona showed that the updated Ferrari F1-75 was fast out of the box, as Charles Leclerc and Carlos Sainz were one and two and the end of the one-hour-session with Max Verstappen trailing them in third by over three tenths of a second.

However, FP2 in the afternoon will be held in conditions mimicking those of qualifying and the race, which means it may be more meaningful to look at the times registered in this session.

Mercedes seemed to be in decent form in FP1, but that was also the case in Miami, only for the World Champions to go backwards later in the weekend. Will that be the case in Spain as well?

Sergio Perez, Alex Albon, and Zhou Guanyu were back in the driver’s seat of their respective cars in FP2, after moving aside for Juri Vips, Nyck de Vries, and Robert Kubica in FP1 respectively.

Out of the 20 cars, 16 head out on track at the start of the afternoon practice session with Medium tyres bolted.

Ten minutes into the session, Valtteri Bottas pulled on the side of the track at Turn 1 with a puff of smoke suggesting a reliability problem, the Finn saying “Something’s broke” over the team radio.

Bottas’ breakdown caused a Virtual Safety Car, as the marshals removed the stricken C42 from the track, but normal running was resumed five minutes later.

Valtteri Bottas has pulled over onto the grass 😖#SpanishGP #F1 pic.twitter.com/jvDDnL9Rlc

Alfa Romeo later reported it was a engine problem sent Bottas to an early shower.

Carlos Sainz had an incident with Williams’ Alex Albon early on to the session, no contact though, but the stewards announced they will be looking into it after the session.

Twenty minutes into the session, Lando Norris ran wide and into the gravel a Turn 9 causing damage to the floor of his MCL36, forcing him back to the team garage for repairs, with no more running possible for the young Briton.

With the runs on the Medium compounds done, drivers bolted on the red-striped Softs compounds to start the qualifying simulations, with Aston Martin’s Sebastian Vettel topping the time screens momentarily before Verstappen restored the normal order. However it was a decent lap from the German, a 1:20.703.

“Barcelona is always a very difficult challenge but so far interesting. We can certainly start assessing relative competitiveness within teams and ourselves.”

Nevertheless, the Reds seemed to be having a decent Friday in Barcelona with their upgraded F1-75.

However what was clear is that Mercedes seemed to be in a good place as their first attempts of qualifying simulations yielded second and third fastest with George Russell faster than Lewis Hamilton, with 24 minutes of running remaining.

And guess what? No bouncing for the Silver Arrows.

George and Lewis jump onto the Soft tyre and move up to P2 and P3 on the leaderboard 💪 pic.twitter.com/S1E5k53lwi

Sky Sports pundit Martin Brundle took to the trackside of the Circuit de Barcelona-Catalunya, at Turn 12 and gave his impressions:

“The Mercedes and the Aston Martins in particular are not as nailed down, they are not as confident in the back of the car,” he said.

“The Red Bulls and Ferraris can hold the tighter line which opens up the entry. It is a really technical part of the final sector and it gets more and more tight then.

“The tyres are getting tormented through here as the drivers try to brake quickly,” he added.

Charles Leclerc clocked a 1:19.670 on his way to the top of the timing screens in FP2 on Friday afternoon, and had George Russell in the Mercedes, hot on his heels in second, 0.117s behind.

Lewis Hamilton was third in the sister W13 merely 0.087s off the pace of his teammate, the seven-time World Champion clearly in a better place with the car.

Carlos Sainz topped the timing screens briefly but was relegated to fourth at the end of the afternoon practice session, 0.320s off the pace of his leading teammate.

Fifth place went to the 2021 Champion Max Verstappen, who was 0.336s slower than his Title rival and was followed by Fernando Alonso in sixth, the Spaniard 0.197s further down.

Sergio Perez, who missed the morning session (Juri Vips ran in his place) was only good for seventh, apparently disadvantaged by the missed running time. He was 0.962s down on the top time.

Sebastian Vettel made it into the top ten, the Aston Martin driver eighth fastest albeit a little over one second off the pace. Nevertheless an encouraging result for the 53-time grand prix winner.

Esteban Ocon put the other Alpine in the top ten, registering the ninth fastest time, a 1:20.745, as Mick Schumacher put his Haas in tenth a negligible 0.012s adrift from the Frenchman.

Notably, both McLarens were out of the top ten, with Daniel Ricciardo 15th fastest, 1.715s off the pace, while his teammate Lando Norris was dead last after retiring early due to a damaged floor on his car. 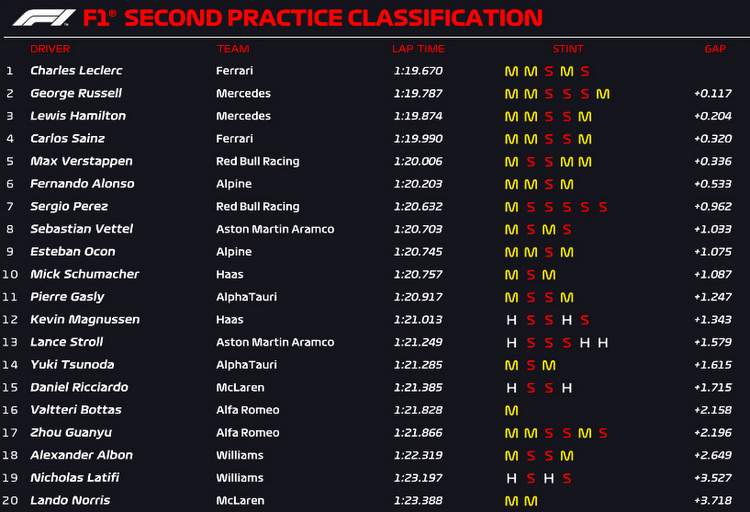