The decision means the 26-year-old, who only joined the Bulldogs from Penrith at the end of last year, could immediately face his former club when the teams face off at Leichhardt Oval on Friday night.

Naden was on Tuesday named as a reserve for the Tigers and is a chance to play against the Bulldogs, who sit last on the ladder with just two wins from their first 10 matches this season.

The outside back, a part of Penrith’s 2020 grand-final team, scored one try in his eight appearances for the Bulldogs.

Canterbury’s poor start to the campaign led to Barrett quitting as the club’s head coach on Monday having won just five of 34 matches in charge.

Naden’s exit doesn’t appear to be the only one after Barrett’s departure with former player and assistant coach Steve Turner not named among the off-field staff in Tuesday’s team list.

High performance manager Dan Ferris, who worked with Barrett at Manly, is reported to have been let go by the Bulldogs.

Star recruit Matt Burton is another who is expected to depart Canterbury.

The 22-year-old has an option in his favour for the final year of his two-season deal and would be free to talk to other clubs if he decides to quit the Bulldogs at season’s end.

Fellow newcomers Matt Dufty and Paul Vaughan have been linked with moves to English Super League with neither having a deal on the table from the Bulldogs beyond this season. 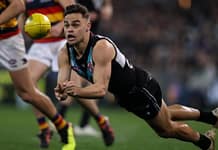