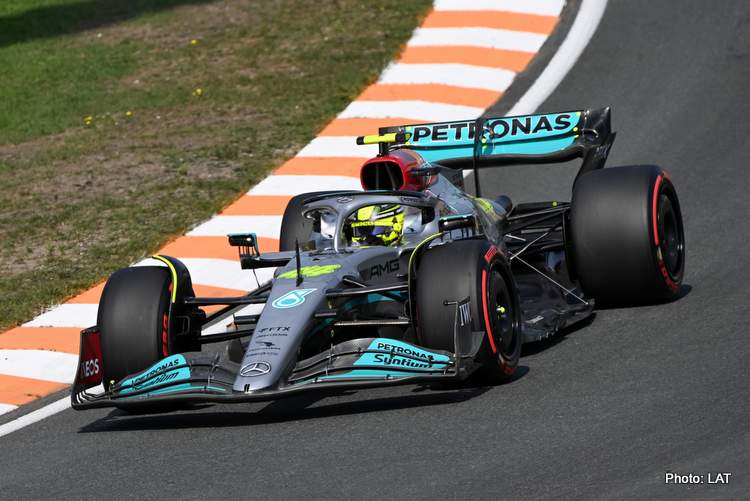 Lewis Hamilton said he is enjoying the challenge of fighting with his 2022 Silver Arrow, the precarious W13, as Mercedes look towards an improved 2023 season.

Hamilton will be happy to consign his problematic Mercedes W13 to history but the seven-time Formula 1 World Champion is still in no hurry to finish a season now offering so little reward.

The Briton, who is 138 points adrift of Red Bull’s leader Max Verstappen with eight races remaining, told reporters at the Dutch Grand Prix that his focus was on next year’s car and every lap mattered.

“I generally love the work that we’re doing regardless of whether we’re fighting for first or wherever,” said Hamilton, who fought Verstappen for the Title right down to the last controversial lap in 2021. “I still love getting in a huddle with the engineers and mechanics.

“And, I still just every day, love the challenge of fighting this car… the amount of engineering we have to do to dial it in is tricky and I would say that probably just increases your sensibility to improve the engineering side.

“I don’t ever want to wish time by… there will be a lot of information to gain in the second half of the season,” said the 37-year-old, who is on his longest-ever streak without a win, but he was focusing on feedback.

“That’s really where I’m applying a lot of my time, it’s just communication with all the heads of different departments really to make sure we don’t leave any stone unturned,” he added.

“It could be brakes, it could be gear ratios, suspension, ride, aero characteristics… to just help guide them in terms of where they design the car for next year.”

Hamilton said key elements already needed to be signed off. “(It’s) making sure you catch them (the engineers) before they sign off those things and get things in the pipeline that maybe in the past we’ve not had time to really focus on,” he explained.

“I’m enjoying it. We’ve won the last eight F1 world Constructors’ Titles and I have every faith in my team and engineers that we will get there.

“It’s just that with the cost cap and (limited) wind tunnel time it’s not as simple and easy as before but it doesn’t mean we can’t get there.”