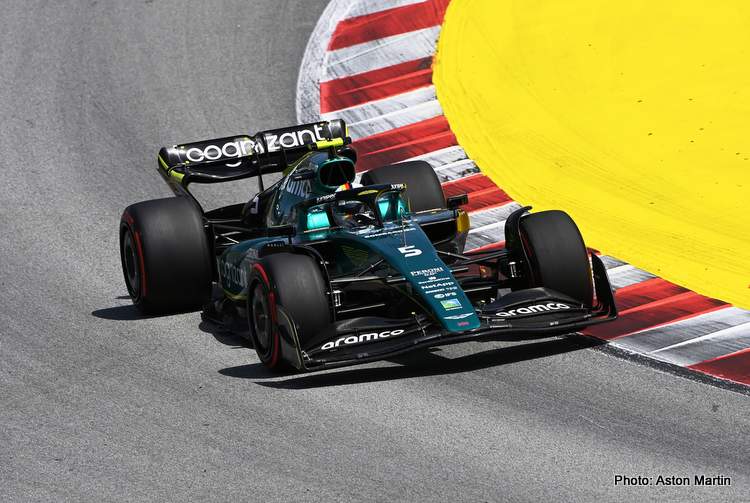 Vettel had a new car to drive in Barcelona, in the form of the upgraded AMR22, now famous for being a “Green Bull”, after the striking resemblance it shares with Red Bull’s RB18.

Aston Martin seemed to go backwards rather than forwards, and it is yet to be clear whether that was down for the team’s lack of knowledge of the new package, or because it is simply another lemon.

After being knocked out of Q1 on Saturday, Vettel raced to an eventual 11th on race day, and when asked by the media after the race whether it was a tough one, he said: “It was okay.

“Obviously it was hot in the car,” he went on. “But yeah, obviously with 11th we’re not taking any points, which was the target, but we missed, not just, because the gap to I think Yuki in the end was quite big, but we tried.”

Asked if his pace was better in the race, the German said: “No, I think for everybody today the car felt poorer, because it was so hot and so slippery with the tires.

“We were going so slow if you think of lap times,” he revealed. “We were doing like Formula 2 qualifying pace all the race.

“We managed well, I think, managed the tires better than most people, but couldn’t make a difference,” the four-time Formula 1 World Champion lamented.

Who said the AMR22 is controversial?

When told it was controversial for resembling Red Bull’s RB18, he responded: “Who says that? I think Red Bull says that, but not many other people.

Later in the team’s post race review Vettel said: “Today was all about managing the tyres and the grip – it was very slippery out there.

“Everyone’s tyres were falling to pieces and lots of drivers pitted fairly early, so we tried something different by opting for a two-stopper.

“In the end, I do not think it really made too much of a difference. Ultimately, we just lacked a bit too much pace to really be able to attack the points-scoring positions.

“But we tried something – P11 is not much of a reward, but we had a decent race,” the 34-year-old lamented. “We knew this new package was not going to be a massive step straight away, but we believe it is a better direction for the future.

“We are making progress and going forwards, and that is what really matters,” he concluded. (Additional reporting by Agnes Carlier)