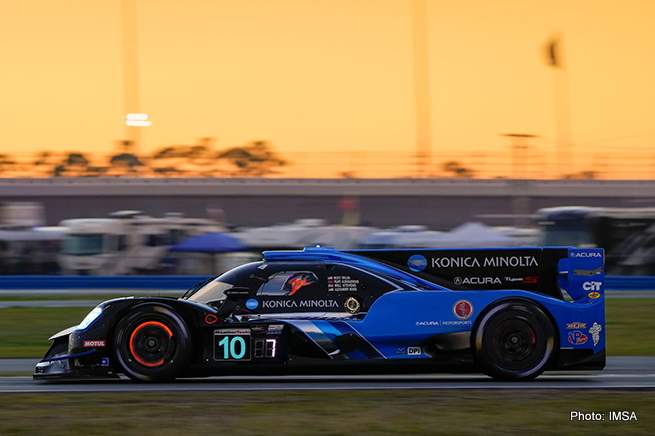 As tends to happen in the overnight hours of the Rolex 24 at Daytona, there was plenty of action and intrigue throughout the field in the 60th Anniversary edition of the great endurance race.

Race favorites dealt with mechanical setbacks and with a 61-car field – one of the largest in recent times – there was also plenty of incidental contact. Yet as the sun rose Sunday morning – 18 hours into the race – all five classes of the IMSA WeatherTech SportsCar Championship featured close competition during a night of freezing temperatures and occasional hot tempers. There were multiple lead changes in every class every hour with the iconic winners’ Rolex watches still very much up for grabs all around.

U.S. television coverage continues to air on the USA network until 12 p.m. ET, when it switches over to NBC for the thrilling conclusion.

By daybreak, the front-running DPi prototype class was whittled down to four contenders – all within 18 seconds of one another. The three-time defending Rolex 24 At Daytona champion Wayne Taylor Racing Acura – driven by Ricky Taylor – took the lead with six hours remaining, passing the No. 60 Meyer-Shank Racing Acura DPi after a driver-change pit stop.

The No. 31 Whelen Engineering Racing Cadillac and No. 5 JDC Miller MotorSports Cadillac were still contending for the overall victory – all four cars leading at various times in this super competitive class largely featuring hybrid lineups of sports car champions and IndyCar Series stars.

“Six hours is still a long way to go,’’ Tristan Nunez said after his early morning stint in the No. 31 Whelen Engineering Racing Cadillac. “It just takes one little incident and you’re a lap down and out of the race. This is when every second counts.

“Who knows? There might not be many more yellows or there might be 40 yellows and the [No.] 01 is back in again, but definitely with four cars it’s still a tight race. All those four cars are shooting pretty equal lap times. So, the race is going to be fierce all the way to the end.’’

That was certainly the way it looked closing in on the final hours.

The No. 8 Tower Motorsports ORECA LMP2 07 took over the lead of the LMP2 class during a pit stop cycle on a caution period at the seven-hour mark. As with the prototypes, the class also featured a tight battle for the win.

The top four cars were all separated by less than five seconds. That included the No. 81 DragonSpeed USA car – shared by three young IndyCar stars: Colton Herta, Pato O’Ward and Devlin DeFrancesco – that brought the car back from five laps down early in the race to contention for the win in the final six-hour stretch.

The No. 74 Riley Motorsports Ligier JS P320 held the point in the competitive nine-car LMP3 class. The leading three cars were on the same lap separated by less than a minute and a half.

Close competition in the GTD classes

Despite the cold temps, the GTD classes featured the same kind of close competition fans have come to expect at the Rolex 24.

The No. 2 KCMG Porsche 911 GT3 R held the point in the GTD PRO class at the 18-hour mark with the No. 62 Risi Competizione Ferrari 488 GT3 and the No. 9 Pfaff Motorsports Porsche 911 GT3 R all within 12 seconds of the lead. Both of the fan-favorite Corvette C8.Rs were out of contention by midnight in their first race under GTD technical rules.

The 22-car GTD class – largest of the five classes in competition – held up its end of the intrigue. Nine GTD cars were scored consecutively in the overall standings with six cars on the class lead lap and five of them separated by less than 12seconds. At the 18-hour mark, the No. 16 Wright Motorsports Porsche 911 GT3 R held the point over the No. 70 inception racing McLaren 720S GT3 and the No. 57 Winward Racing Mercedes-AMG GT3.

The 18-hour mark also served as the third of four points-scoring opportunities for the IMSA Michelin Endurance Cup. The No. 5 JDC-Miller MotorSports Cadillac, which led the standings alone at 12 hours, now is tied for the lead with the No. 60 Meyer Shank Racing Acura with 10 points apiece.

A tie in the LMP2 standings

The LMP2 standings also are tied, with the No. 52 PR1 Mathiasen Motorsports ORECA squad and the No. 29 Racing Team Nederland ORECA teams deadlocked with 11 points each. In LMP3, the No. 74 Riley Motorsports Ligier team took over the top spot in the standings by one over the No. 54 CORE Autosport squad.

The No. 2 KCMG Porsche 911 GT3 R will leave the Rolex 24 with the Michelin Endurance Cup points lead regardless of its results over the final six hours. It is five points, 14-9, ahead of the No. 62 Risi Competizione Ferrari. And in GTD, the No. 70 inception racing McLaren team moved into sole possession of first in the standings with nine points, two ahead of the No. 27 Heart of Racing Team Aston Martin program with which it was tied at the halfway point in the race.

One of the race and fan favorites in the Rolex 24 was the No. 48 Ally Cadillac DPi driven by seven-time NASCAR champion Jimmie Johnson. Both Johnson and the car had an eventful and ultimately rough overnight outing at the front of the field – colliding with the No. 15 GTD PRO class Mercedes driven by Dirk Mueller just after 2 a.m.

Johnson’s car suffered a broken right rear suspension and significant time behind the wall for repairs and was running 13th overall – fifth in class – with six hours remaining.

The former Rolex 24 champion Chip Ganassi Racing Cadillac DPis, who led much of the early portion of the race – also suffered tough breaks. Both the No. 01 and No. 02 CGR Cadillacs suffered mechanical issues overnight and into the early morning hours. The No. 02 was scored 17th overall and sixth in the DPi class at the 18-hour mark and the No. 01 was 32nd overall (seventh in class) – both multiple laps down but still running to collect season championship points. (Reporting by IMSA)