Nigeria is home to some of the greatest footballers the world has witnessed, such as Jay Jay Okocha, Nwankwo Kanu, Sunday Oliseh, Yakubu Aiyegbeni, Rashidi Yekini, Segun Odegbami and Finidi George, among others. In the footballing world, Nigeria is synonymous with talent.

The nation is blessed with extremely talented footballers. There are few nations in the world that can go into a tournament without four key strikers and still win maximum points. The country missed Victor Osimhen, Odion Ighalo, Emmanuel Dennis and Paul Onuachu at the ongoing AFCON tournament, yet the Super Eagles kept a 100 per cent record at the group stage of the tournament.

From the grassroots level, the country has shown success over time. Nigeria is the most successful country at the U-17 level in world football. However, one of the criticisms Nigeria faces is the lack of progression from the grassroots level to the senior team. This is a template that has worked for many nations at the biggest stage; the 2018 French team, the 2014 Argentina team and the 2014 German teams come to mind. 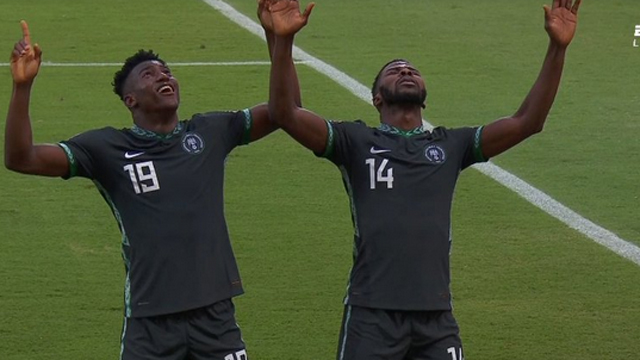 This is a narrative that seems to be changing, as some of the current crops of players have played together at the U-17. Samuel Chukwueze, Kelechi Nwakali, and Victor Osimhen led Nigeria to glory at the 2015 FIFA U-17 World Cup in Chile. Kelechi Nwakali was awarded the golden ball due to his fine performances, while Victor Osimhen scored 10 goals in the tournament, which is the current record for the most goals scored in a single Under-17 World Cup tournament.

Francis Uzoho, Kelechi Iheanacho and Taiwo Awoniyi were in the squad that won the 2013 FIFA U-17 World Cup in the UAE. Iheanacho was the star of the tournament with six goals and seven assists at the competition, this performance earned him the golden ball award and a move to English giants, Manchester City.

After giving Nigeria the lead against Egypt at the first group stage match of the AFCON tournament, Iheanacho and Awoniyi recreated a celebration from nine years ago for the Golden Eaglets. “It was our celebration during the U17 World Cup, nine years ago. It is our own way of saying thank you to the technical crew, led by coach Manu Garba. We dreamt of leading the attack for Nigeria, nine years ago and it happened. It’s a nice way to start the tournament,” Iheanacho said after the game.

Leading communications outfit, MTN Nigeria, is poised to aid the country in its path to securing a clearer path of progression to the senior team. MTN Nigeria has made several investments towards the growth of Nigerian football over the years. In a bid to identify and coach the best young footballing talents in Nigeria, MTN Nigeria and top Premier League club, Arsenal Football Club, held a three-day coaching clinic for 128 young players and 30 coaches in October 2018 at the legacy pitch of the National Stadium, Surulere, Lagos.

The company became the official communications partner of the Super Eagles and other national teams after signing a three-year multi-million naira partnership deal with the Nigerian Football Federation (NFF) on September 2, 2021.

How do Arsenal react to Beth Mead’s injury? | Arseblog News