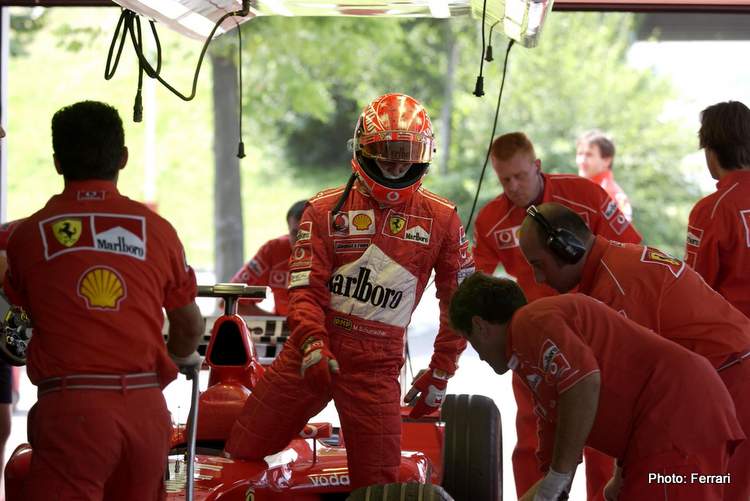 Carlos Sainz will enter his second Formula 1 season with Ferrari in 2022, and the Spaniard reveals that the team still talks about Michael Schumacher.

Ferrari have won only one F1 Drivers’ Title after the German Legend left the team at the end of the 2006 F1 season, courtesy of Kimi Raikkonen in 2007, they missed out on it in 2008 as Lewis Hamilton beat Felipe Massa by one point on the last lap of the last race in Brazil that year.

Ever since, the team has been waiting for the next Schumacher to come and drag them back to title glory, with great drivers like Fernando Alonso and Sebastian Vettel having a go at it, but coming up short, albeit close.

Alonso fought Vettel, in vain, in 2010 and 2012 up to the last race when the German was a Red Bull driver, whereas Vettel himself gave Lewis Hamilton a run for his money in 2017 and 2018, but couldn’t seal the deal in both seasons.

Now Ferrari has a young driver lineup with Charles Leclerc, and Carlos Sainz spearheading the team’s F1 efforts and – after a somehow progressive 2010 season – look forward to making strides in 2022 with the new regulations in effect.

Carlos Sainz spoke to Corriere della Sera in an interview ahead of the 2022 F1 season, and singled out Michael Schumacher as the driver he would love to meet.

Sainz in awe of how Schumacher rallied the team around him

“Since I’ve been at Ferrari I’ve been listening to a lot of stories about Michael Schumacher,” he said. “He is a man I would have liked to know, to have as a companion, to understand how he managed to be so special.

“Every mechanic talks about him and it’s great to hear how he was able to win over an entire group, to drag them along, surrounded by esteem and affection,” Sainz explained.

Sainz has had an impressive debut season in Red, and finished ahead of his highly rated teammate Leclerc, as he capped off his 2021 F1 campaign with a fine third place the controversial Abu Dhabi season finale.

Asked of his future with Ferrari, the 27-year-old said: “As Binotto said, we are both satisfied, we intend to continue together and this winter counts as an opportunity to find an agreement.

“We are trying. Becoming world champion with Ferrari is my highest ambition. I would like to renew as soon as possible,” Sainz concluded.

The question remains if Sainz is the driver who will finally end Ferrari’s title drought, but the signs from his first year with the team are positive nonetheless,.

He doesn’t lack the talent or the work ethic to win, but he will need a unified team behind him to achieve that feat, and most importantly a fast car.