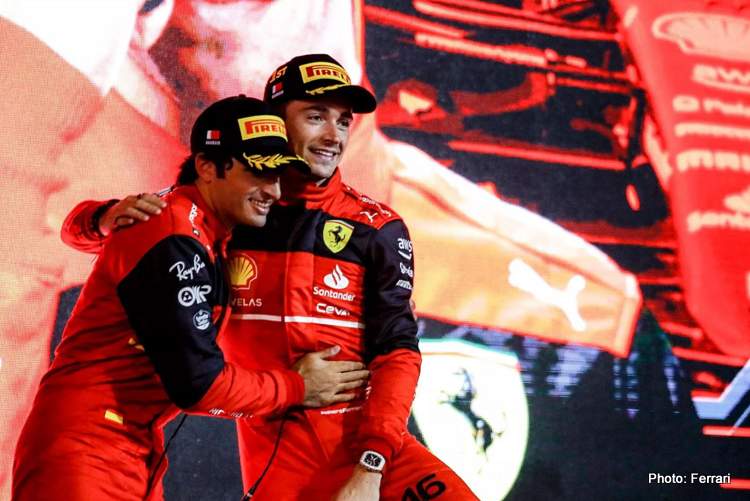 The Maranello-based team are the sport’s oldest and most successful, crowning great champions like Juan Manuel Fangio and Michael Schumacher, but Charles Leclerc’s victory at Sakhir was their first since 2019.

Ferrari fans have had to endure years of disappointment with the team either off form or, when competitive, flattering to deceive.

Sunday was the team’s first season-opening one-two since 2010 and ended a 45-race winless streak, raising genuine optimism that Ferrari have nailed the sport’s radical rules overhaul and are back in contention.

“To see Ferrari competitive again is very good for everyone,” Domenicali, a former Ferrari team principal, told reporters after the race.

“I’m sure that this will have an impact on the numbers of ticket sales that the promoter will sell. I’m expecting in Imola a big crowd as in the old days,” predicted the Italian.

The Italian track, named after Ferrari founder Enzo and his son Dino, hosts the fourth race on the calendar and the first of two home grands prix for Ferrari.

A sell-out crowd could be on the cards, especially if Ferrari keep their competitive run of form going through the long-haul races in Saudi Arabia and Australia; Domenicali’s prediction could well come true. Binotto: Jeddah can be a completely different picture

Team principal Mattia Binotto said Ferrari, who have not won a F1 championship since 2008 when they won the constructors’ title with Kimi Raikkonen and Felipe Massa, the former their last driver’s World Champion from 2007.

Previously the Scuderia had season-opening wins in 2017 and 2018 as well as, famously, in 2010 when Fernando Alonso triumphed for the team in 2010; missing out on that championship is about as close as they have been ever since.

Binotto sought to temper inevitable expectations when Ferrari win, explaining that Red Bull, whose world champion Max Verstappen went wheel to wheel with Leclerc and would have finished second but for a fuel system failure that put him out of the race, were still favourites

“Jeddah can be a completely different picture,” he warned, before showering praise on his team. “Personally, I have always had faith in them. They have worked as a united group and reacted to the difficulties we encountered. It’s nice to see we are once again battling for first place, which is our goal for this season.

“To win in F1, you have to do everything perfectly and today we did just that and that goes for everyone, the drivers, the F1-75, the engineers with the strategy and the mechanics, who were impeccable at the pit stops,” added the Ferrari boss.

Mercedes driver Lewis Hamilton finished third on Sunday, as he did the last time Ferrari enjoyed a season-opening 1-2 finish back in 2010, also in Bahrain, sharing a podium then with Alonso and Felipe Massa; this time around it was with Sainz and Leclerc.

The seven-times F1 World Champion said: “A big, big congratulations to Ferrari, I’m so happy to see them doing well again, they are such a historic and epic team.”  (Reporting by Abhishek Takle)

A day of late braking and hand-shaking 🤝