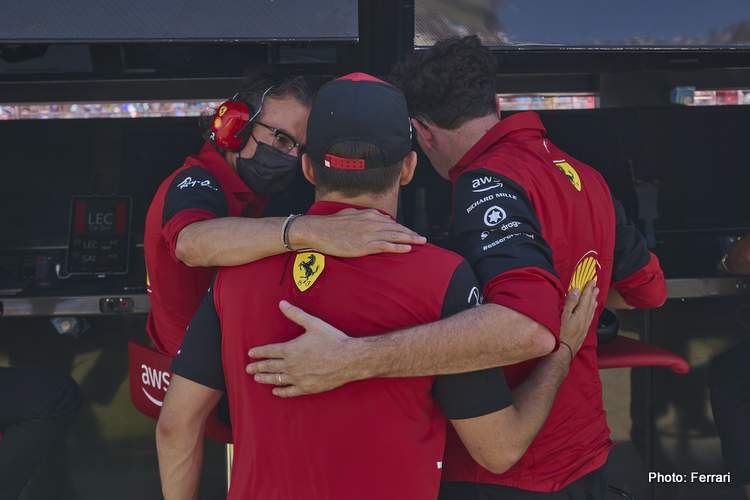 Jacques Villeneuve slammed Ferrari and Charles Leclerc after the 2022 French Grand Prix, claiming what they are doing is the best example how not to win the Formula 1 Championship.

Ferrari and their lead driver Charles Leclerc’s problem go beyong what happened at Paul Ricard on Sunday, as they have been throwing points away all season either through reliability and strategy errors, or through driver error, wasting their pace-setting car, the F1-75.

The race at Le Castellet started with promise of an epic fight between Leclerc and Max Verstappen, as the latter chased the former during the opening stint without any avail, but while Red Bull went for the undercut, Leclerc crashed out pushing to cover them, the fans deprived from a tussle between two of the most talented drivers on the grid.

Race could have better with a Leclerc/Verstappen fight

“The race was good, but could have been so much better,” Villeneuve said of the missed fight in his formule1.nl column. “With the tremendous heat levels, we had all the ingredients for a great fight.

“Leclerc and Verstappen had the same pace, but Leclerc went and made another mistake that he should not have made. He admits it himself, this kind of thing means he doesn’t deserve the championship.

“I don’t get it either, in Austria he withstood the pressure just fine,” a bewildered Villeneuve wrote. “That is the big difference with Verstappen, this does not happen to him. And if he is beaten by Leclerc, he often finishes second, so the huge gap is not going to shrink quickly.

“And so we have a championship with two more or less equal cars, but where one has a big lead. This is the best example of how not to win a championship,” the Canadian claimed.

It’s days like yesterday that make you stronger. We’re behind you every step of the way, @Charles_Leclerc ❤️#essereFerrari 🔴 #FrenchGP pic.twitter.com/AJ56ekPjXD

As if Leclerc’s driver error was not enough, Ferrari went ahead and ruined Carlos Sainz’s race with a botched pitstop, and bad strategy, as if the Spaniard didn’t have enough on his plate, starting from the back of the grid after his grid penalty, after taking a new power unit, his previous blowing out spectacularly in Austria.

“Sainz was unhappy yesterday,” Villeneuve said. “First things went wrong during his pit stop, then there was the penalty he got after that, which I think they should have redeemed afterwards.

“Sainz made a really brilliant move on Pérez and still seemed to have the speed to pull away,” the 1997 F1 Champion pointed out. “They then acted hesitantly at the pit wall at Ferrari and that costs Sainz points.

“It seemed like he didn’t trust his team, but remember, we’re only hearing bits and pieces of the radio communications. Also, the team has the data, they are aware of the condition of the tyres.

“But if you’re going to bring him in, do it sooner. Then you give him time to make things right,” Villeneuve insisted.

After the French Grand Prix, Leclerc is 63 points behind the Drivers’ Championship leader Verstappen, as Red Bull lead Ferrari in the Constructors’ Standings by 82 points.