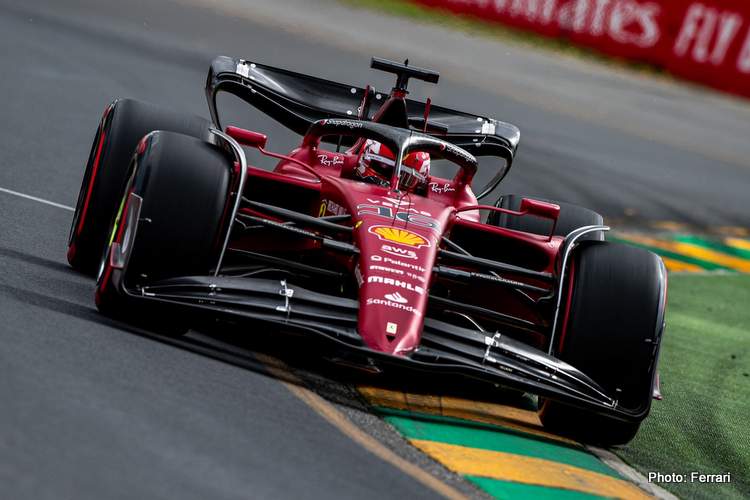 Melbourne’s qualifying was intense, interrupted with crashes and Red Flags, but it was Charles Leclerc that emerged on pole hammering Max Verstappen (and the rest) in the process.

I was one of the closest qualifying we have seen in a while now, as with Max Verstappen on provisional pole, Leclerc was chasing and it all hanged on the moment when the Monegasque crossed the line, when it was clear he has snatched the pole down under from the 2021 World Champion. Gripping stuff.

Verstappen was almost three tenths slower than Leclerc, a margin that should serve as a food for through for the energy drinks outfit and their ace.

Leclerc said after grabbing pole: “It felt good, even more because it is a track I have always struggled on in the past. As a driver, it probably doesn’t fit me as well but this weekend we have worked hard.

“In Q3 I managed to put everything together so it feels great and very happy to be starting on pole tomorrow. Again we were quite surprised by our pace in qualifying so we will see what happens tomorrow,” he warned.

Verstappen reflected: “I do not feel good. I didn’t really feel good the whole weekend so far. I don’t think there has been one lap where I have felt confident.

“It was a bit of a struggle. Of course, second is still a good result but it is hard to go to the limit.

“For me, this weekend so far has been all over the place, happy to be second, but as a team we want more,” the Dutchman admitted.

Third place went to Sergio Perez in the sister Red Bull, the Mexican looking good all through qualifying, and ended up only 0.086s off his teammate’s pace.

Perez said in the on track interview: “It felt good…I think we’ve got a nice race ahead of us. First of all, I hope we make a lot of fans very happy tomorrow because we’ve got full grandstands already on Saturday.

“Hopefully tomorrow we can give them a nice race,” the Mexican added.

Qualifying for the 2022 Formula 1 Australian Grand Prix somehow restored the order of things in F1, as teams usually considered as back-markers in 2021 did not feature in Q3, in other words, Alfa Romeo, Haas, and AlphaTauri did not make the cut.

It was a dramatic session to say the least with crashes and Red Flags both in Q1 and Q3 the first caused by compatriots Nicholas Latifi and Lance Stroll, the second caused by Fernando Alonso.

Behind the top three

Lando Norris made McLaren’s day, as after topping FP3 earlier in the day, he took an excellent fourth position for the Woking squad, albeit over eight tenths off the pace.

Fellow Briton Lewis Hamilton drove the wheels off his Mercedes W13, and took fifth, 0.122s further behind Norris, as George Russell took sixth in the sister Silver Arrow with a best lap time of 1:18.933.

Daniel Ricciardo could not beat his teammate, but please his home crowd by making it to Q3, on a good day for McLaren, as he took seventh in the #3 MCL36, but he was 1.164s too slow from the best.

Superb effort from everyone. Bring on race day. 🧡 pic.twitter.com/rObK8HMUCG

Esteban Ocon took eighth after his teammate Fernando Alonso crashed on his first Q3 outing, the Frenchman 1.196s slower than the benchmark time of the day.

Carlos Sainz was a disappointing ninth for Ferrari, really tough to swallow on a day when your teammate gets a dominant pole. The Spaniard’s best time was 1.:19.408. a whopping 1.54s slower than Leclerc.

Sainz said of his qualifying: “We had a problem with the starter. The car wouldn’t start, we went out three minutes later than when we were planning to go out.

“I couldn’t prepare the tyres, I couldn’t warm up the tyres, everything was rushed and I had to do the lap with freezing tyres. It was a horrible lap.

“Everything that could go wrong in Q3 went wrong, especially because I was in the fight for pole position for the whole of quali,” he concluded.

Alonso had to settle for tenth best after his session ending crash. 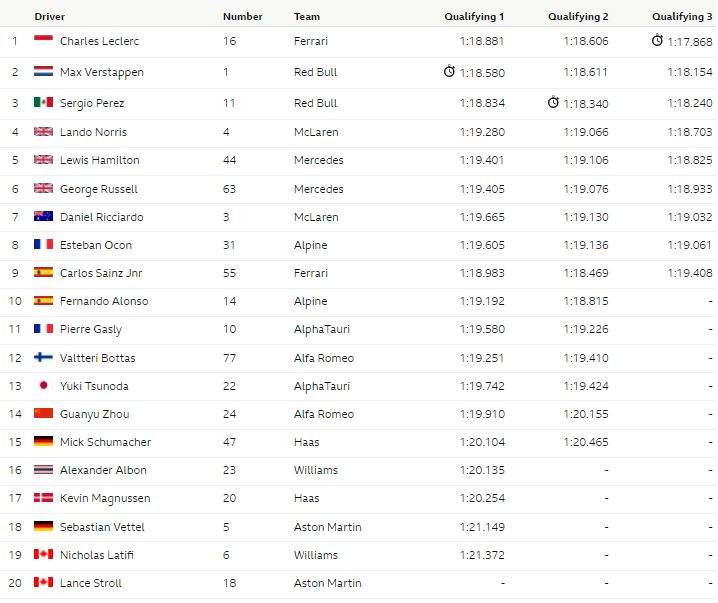 Qualifying was Red Flagged with a couple of minutes remaining from Q1, after Lance Stroll in his freshly repaired AMR22 got tangled with compatriot Nicholas Latifi, the latter crashing heavily out, as Stroll sustained suspension damage again, giving his mechanics some more work to do after repairing his car from the damage he caused in his FP3-ending crash.

Latifi and Stroll collide in the first sector and both are out of qualifying#AusGP #F1 pic.twitter.com/lhb5OHUKM7

The stewards announced that they will be investigating the incident involving the two Canadians, with penalties probably to be dished out after such a brain fade from the pair.

Latifi said after the incident: “For me, it’s quite clear. I’ve just seen the video, I just tried to hold that line to prepare my out lap and he just turned into me once I was alongside him. There’s not much more to say besides that.”

Stroll added: “We were on a cool lap, I saw the video and he went to pass me all of a sudden on a very awkward part of the circuit.

“I think what happened was just very awkward. He was all of a sudden just trying to come by me and it goes very narrow to the right there. Then we made contact,” he added.

Ironically Stroll’s shenanigans gave his teammate Sebastian Vettel the chance to take part in qualifying, since the German was initially at risk of not taking part earlier, as his car was still being worked on when Q1 began.

Vettel however could do no better than 18th when Q1 was over, but credits goes to his mechanics for getting the car ready.

Fernando Alonso crashed on his hot lap in Q3, a pity for the Spaniard who looked good for a strong qualifying all weekend, as the he lost his Alpine at Turn 11 and reported a hydraulic issue on the team radio.

Naturally the double World Champion’s crash brought out the Red Flag, as his stricken A522 was retrieved from the track.

Alonso loses the car at Turn 11 and he hits the wall 😫#AusGP #F1 pic.twitter.com/wmxlJvOTuz

That’s what Alonso said of the team radio: “I locked the hydraulics and I couldn’t change gear.” A real shame for Nando…

After qualification, he revealed: “It was something hydraulic because we couldn’t change gear. I don’t know if we could fight for pole but that lap was top three.

“I was probably doing my best weekend in years, fighting for pole positions so whatever it is we will take it,” Alonso added.

Pierre Gasly missed Q3 this time, and had to settle for 11th, with his best time of 1:19.226 not good enough to prevent his elimination

Valtteri Bottas followed in 12th, also missing the final stage of qualifying and was 0.184s further behind Gasly, and was sandwiched by AlphaTauri as Yuki Tsunoda was behind him in 13th a mere 0.014s adrift.

Zhou Guanyu put the other Alfa Romeo in 14th place with a 1:20.155, as Mick Schumcaher took 15th, outqualifying Kevin Magnussen for the first time this season, and over three tenths slower than Zhou. 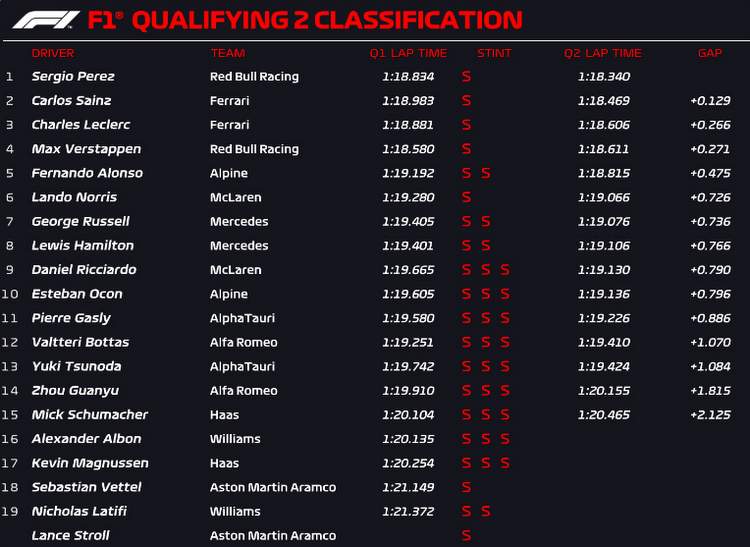 Alex Albon was the best of the Q1-exiting drivers as he took  16th place with a lap time of 1:20.135, after which the Thai driver parked his car on the track.

The dream was over for Kevin Magnussen after the first two races of 2022, as in Melbourne, as the Dane was out of qualifying in Q1 with 17th being the best he could muster, while his teammate, Mick Schumacher made it to Q2.

Sebastian Vettel who went out on track in the last minute benefitting from the Red flag caused by his teammate Lance Stroll earlier in Q1 set a lap time of 1:21.149 only good for 18th.

Nicholas Latifi’s time registered before his crash with Stroll was only good for 19th, as the latter did not even set a timed lap. 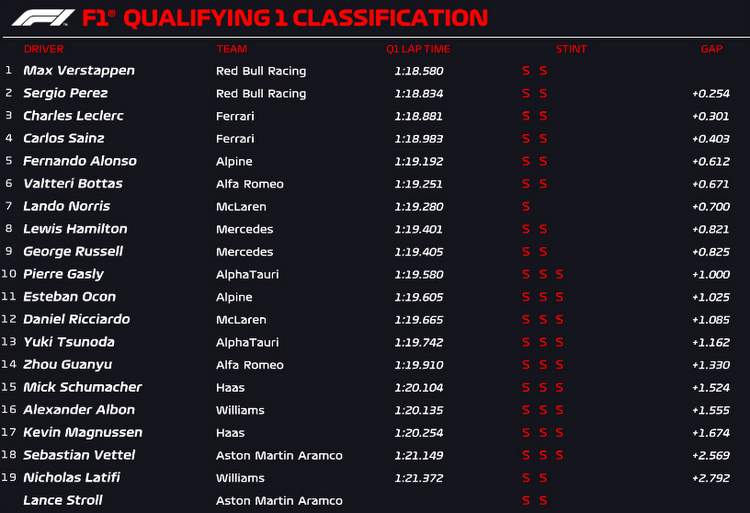