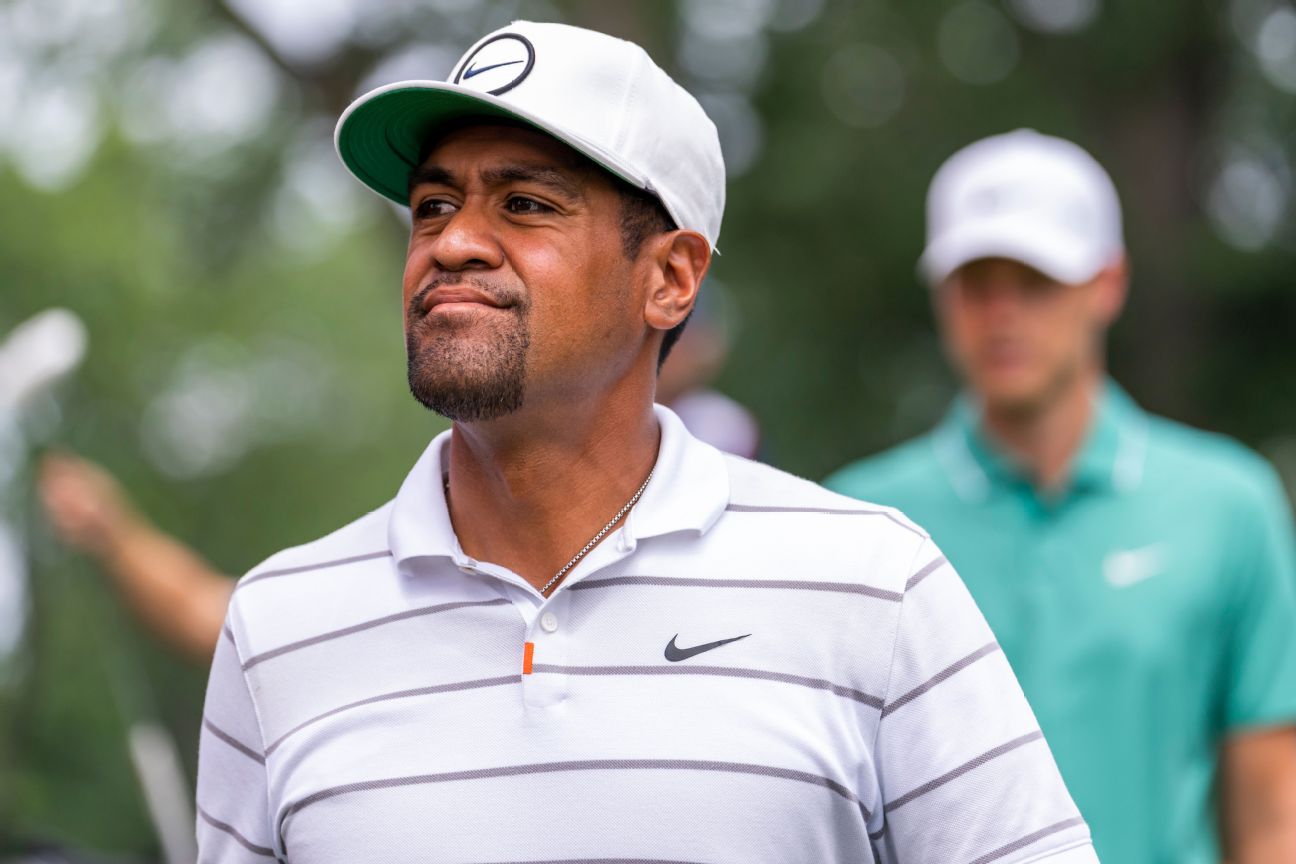 DETROIT — Tony Finau sent an approach from 250 yards soaring over trees and onto the seventh green at Detroit Golf Club, going for the reward and ignoring the risk with a difficult shot.

The way he has been playing over the past week, it made a lot of sense.

Finau, coming off his third career victory on the PGA Tour, and Taylor Pendrith shared the first-round lead at 8-under 64 on Thursday in the Rocket Mortgage Classic.

“I had to get all of it to get it to the hole and hit it right in the middle of the green,” he said.

The leaderboard was filled with players who took advantage of favorable scoring conditions with morning tee times. In the afternoon, the wind picked up and the scores did as well.

Si Woo Kim and Kurt Kitayama, both ranked among the top 70 in the world, were in the pack at 67.

Finau, who rallied from a 5-shot deficit with 11 holes left to win the 3M Open by 3 shots Sunday in Minnesota, opened with a birdie and had five birdies on his front nine.

After cooling off with four straight pars, Finau closed with his seventh and eighth birdies in a bogey-free round. He hit all 18 greens in regulation for the first time in 728 PGA Tour stroke-play rounds.

“Do the math, I missed 10 putts,” he said. “Obviously, 64′s a very good round, but this is a golf course where a lot of guys are going to make birdies.”

On the par-4 eighth hole, he made a 41-foot putt downhill with a slight break from right to left for another birdie and a 3-shot lead.

“It was nice to just get a bonus birdie on 8 after a poor wedge shot, but that’s why we call our putter the equalizer,” Finau said.

Pendrith, a 31-year-old PGA Tour rookie, surged into a share of the lead with five birdies in a seven-hole stretch on his back nine.

Toward the end of his round, the relatively anonymous player in the world noticed the ‘h’ in his last name was missing on the leaderboard.

Alas, the 8 under next to his misspelled name was correct.

“That’s all that matters,” he said with a grin.

Pendrith is atop a leaderboard for the first time on the PGA Tour following an opening round. The Canadian did have the third-round lead by 3 shots last October at the Bermuda Championship before closing with a 76 and finishing a career-high fifth.

The injury prevented him from competing for nearly four months, leading to him being ranked No. 237. He has bounced back with ties for 11th and 13th at tournaments earlier this month.

“When I’m healthy, I can compete with the best,” Pendrith said.

Nate Lashley, who won his first and only PGA Tour title in Detroit four years ago, shot a 68 after getting an anti-inflammatory shot in his right foot.

“I’m having surgery next week,” he said, adding he will need four to six weeks to recover.

Mark Hubbard was also 4 shots off the lead after a topsy-turvy round with four birdies, two bogeys and an ace on the par-3, 216-yard 11th hole.

Hubbard dropped his club and his head after hitting his tee shot.

“That’s embarrassing,” he said while the ball was in flight.

The ball landed on the front of the green and rolled toward the cup before going around it and dropping in.

“That’s probably going to end up being one of my favorite hole-in-ones,” said Hubbard, who has nine career aces.

The field includes five players in the top 20, and Finau was the only one of them to fare well in the first round.

Defending FedEx Cup champion Patrick Cantlay, ranked No. 4 in the world, and 13th-ranked Will Zalatoris both shot 70. Cameron Young, ranked 19th, was another shot back and 20th-ranked Max Homa had a 72.