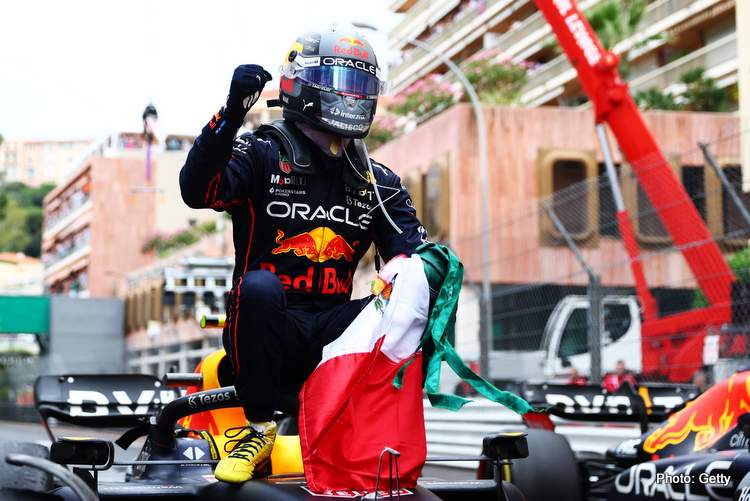 Sergio Perez had the upper hand over Max Verstappen throughout the whole Monaco weekend and he topped it by a historic win on Sunday.

Perez now is third in the Drivers’ Championship six points behind Charles Leclerc in second, and only 15 down on his teammate Verstappen now leading.

Christian Horner did say that Perez is in this Championship as much as Verstappen, and it seems those are the exact thoughts of Jacques Villeneuve.

In his column for formule1.nl, Villeneuve wrote: “Sergio Pérez is a candidate for the championship. He’s been fast all year, and doesn’t get blown away by Max.

“He is the only teammate who has not been left in the dust by Max,” he went on. “Sure, he’s a team player, but he’s also experienced and not very typically Latin American, in the sense that he doesn’t overreact and is not hot-tempered.

“Maybe that was different when he first got into Formula 1, but not anymore,” the Canadian wondered. “His experience is helping him. He joined Max’s team knowing that Max is the king there, but he’s still trying his very best, is still going fast when needed, and then he goes and wins in Monaco.

“This is the most important victory you can have in your career, and he is a candidate for the world title,” the 1997 World Champion insisted.

“Why? At Red Bull they are in a battle with another team, so they will not always be able to issue team orders,” he explained. “Team orders come into play if you are in first and second place, but not if you are first and third, for example.

“So he has trumps in hand,” Villeneuve said of Perez. “It was different with Bottas and Hamilton, because they had no [external] competition and that made it easier to issue team orders.

Despite dominating proceedings from Friday, Charles Leclerc endured a nightmare at his home race, as a botched Ferrari strategy cost him his first Monaco Grand Prix win.

Villeneuve touched on the Monegasque’s race saying: “Charles Leclerc was, just like in Barcelona, much better than the rest of the field. He was relaxed all weekend and had everything under control.

“That was to be expected here, of course, because his car is fast in the slow corners,” he claimed. “But in the race I found it hard to understand. They didn’t want to take any chances with Leclerc. Not take any chances?

“This is a city that loves a gamble, with all its casinos. Not gambling in Monaco and playing it safe never pays off here. Both Sainz and Pérez took the right decision,” the 51-year-old insisted.

“Leclerc is struggling, as he was clearly the strongest of them all for two races in a row. He is not making any mistakes whatsoever.

“He drove well [in Barcelona] and then he got mechanical problems, and here his strategy didn’t work. He wasn’t even on the podium and has again lost points to Max.

“Ferrari has lost momentum, they should be leading the field, including in the constructors’ championship,” Villeneuve concluded.