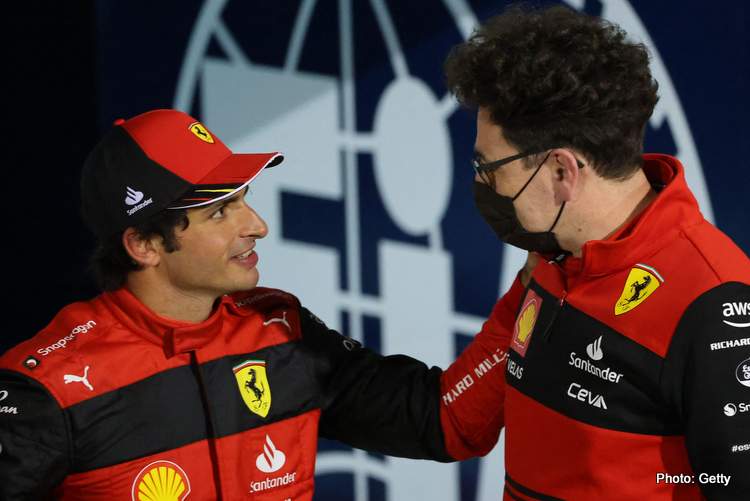 Ferrari announced that Carlos Sainz will remain with them up to 2024 on Thursday, and the Spaniard claimed that contract renewal negotiations have been super-straightforward.

The big news announced ahead of one of the team’s two home races this season at Imola this weekend – the second being in Monza in September – means that Sainz’s contract will expire at the same time as his teammate Charles Leclerc’s in 2024, which should serve as a statement of faith from Ferrari in his capability.

Commenting on the negotations, Sainz was quoted by F1’s official website saying: “Super-straightforward, to be honest – it’s been easygoing I guess; after such a good first year that we had, just getting it agreed… was fairly easy for both parties, and I guess just now having the opportunity to announce in a place like Imola, in front of the tifosi on a weekend like this, I think it was ideal. We put together a good plan for the announcement being here also.”

Sainz added that stability within the team was a major factor is getting to a positive outcome from his contract renewal negotiations with the Reds.

“Well I think [stability is] key,” he claimed. “I think it’s no secret recently that not only me but I think you’ve heard also other drivers saying it’s important on the driver’s side to have their full focus on the performance, on the racing, and not having to focus too much on what the future holds.

“For me, I’ve since I discovered this when I raced for McLaren – I’ve been very vocal towards it,” the 27-year-old added. “Honestly, I’ve been pretty sure all winter that we were going to secure this so it’s not like I was worried in the first three races – but it always gives you an extra bit of a push.”

Leclerc very happy with Sainz onboard

Sainz has struggled this year to match his teammate, Leclerc, who has been the star of the first three races of the season, but the Monegasque is happy to have the Spaniard around for two more years.

“I’m very happy,” Leclerc announced. “Obviously Carlos is a great guy other than just a very good driver too, and we have a very good relationship.

“We also work together very well but I think what is the most important is that we also have the same feedback,” he added.

“We need the same things from the car but this is extremely important for the future of the team, for us to both push in the same direction.

“This has been the case for the last year and a half and I think we are already seeing the benefits. So yes, having Carlos in the team for the next two years is great,” Leclerc maintained.

Leclerc echoed his teammate’s opinion about the importance of stabilit within the team and said: “It’s very important.

“I think, for many reasons – obviously I know this because I have signed a very long contract with Ferrari and to know that you are in the same place for many years to come is great for the confidence, for feeling good mentally, and obviously being able to work in the long-term, which always has its benefits,” the four-time grand prix winner concluded.