Canada added another medal to its tally at the Beijing Olympics on day five of competition Wednesday, with a chance for more spots on the medal podium still to come.

Here’s what you may have missed from the overnight competition so far.

The 24-year-old, who is making her Olympic debut in Beijing, won Canada’s first medal in the event since the 2014 Games in Sochi.

Fellow Canadian Tess Critchlow nearly joined Odine in the final but placed third in the semifinal round, sending her to the small final where she finished second for a sixth-place overall rank.

Zoe Bergermann and Audrey McManiman made it to the quarterfinals in the same event but failed to make it into the top two in their heats, ending their runs.

Earlier in the day, Elizabeth Hosking and Brooke Dhondt both advanced to the women’s halfpipe final after finishing ninth and 10th in the qualifier, respectively.

Hosking had a disappointing first run, scoring just 10.0 after falling on her first trick attempt. But she managed to recover on the second run with a score of 70.5, as the best of the two scores determined the final rankings.

Dhondt managed to secure her spot with a solid score of 70.0 on her second of two runs, improving slightly on her first crack at the course.

In the men’s halfpipe qualifier, Liam Gill placed outside the top 12 with a best score of 15.5, finishing 23nd and ending his journey in Beijing.

Evan McEachran started strong with his first of three runs in the men’s freeski big air final, hitting a score of 93.0 and finishing the round in second position.

But he was unable to keep up the momentum and fell on his two subsequent runs, ending the final in ninth place.

Erin Mielzynski fared the best out of the four Canadians competing in the women’s slalom final, placing 16th with a combined time of 1:47:52 after two runs through the course. 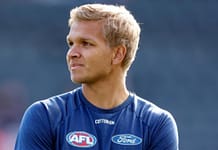