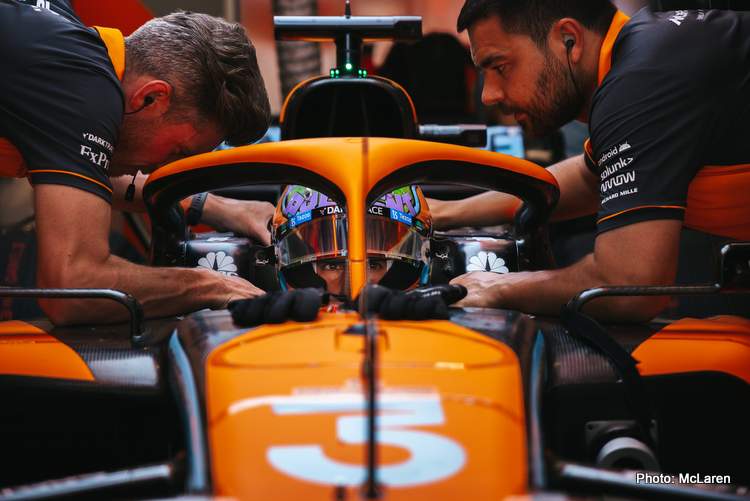 Daniel Ricciardo is looking to bounce back from an underwhelming race in Spain last Sunday, at the 2022 Monaco Grand Prix this weekend.

The Australian struggles are still apparent this season, his second Formula 1 season with McLaren, as he finished the 2022 Spanish Grand Prix 12th having started ninth.

Ricciardo is looking ahead to this weekend in Monaco, a race which he has won in 2018 when he was still a Red Bull driver.

Speaking in McLaren’s race preview, he said: “I’m bouncing back from a difficult race and looking forward to getting stuck into the Monaco weekend.

“I have a lot of history with this race so I’m hoping to make a mark in the MCL36 this year and score some points for the team. The atmosphere around Monaco is always exciting so it will be great to soak it all up. I’m also really looking forward to the short commute to track from my home!

“Off the back of Spain, I’ve got my head in the data with the engineers to make sure we’re in the best position possible to fight for a top 10 finish,” Ricciardo revealed.

“We learnt a lot about the car, particularly with the good upgrades, and I have great trust in the team for us to keep improving. Hopefully we can put together a solid weekend and fight for a top 10 finish. Let’s keep pushing,” the Honey Badger concluded.

Lando Norris finished the race in Spain in eighth position, once again outperforming his teammate despite being down with tonsillitis.

Norris relishes waking up in own bed to go racing

The Briton, now a Monaco resident, said ahead of what he now calls his home Grand Prix: “I always look forward to the Monaco weekend. It will be nice to be racing so close to home, particularly as I can wake up in my own bed!

“Last year it was a fantastic race for me and whilst we’re not back at that level just yet, I’m hoping we can pick up some good points here.

“Qualifying on Saturday is going to be key but it will be interesting to see how the race plays out on Sunday with these new cars.

“I’m taking these few days to rest up and to focus on getting better before diving into Monaco,” Norris added. “Spain was incredibly tough, but I was very pleased to get some points for the team.

One year ago today, @LandoNorris finished P3 at the #MonacoGP, securing his third-ever podium. 🏆👏 pic.twitter.com/c5amTzhCbR

Andreas Seidl, McLaren team principal, is looking forward to race in Monaco with an upgraded MCL36 that worked well in Spain

“I’m looking forward to this weekend,” he said. “Monaco is such a historic race and one the drivers and the team love so it’s shaping up to be a good weekend.

“Our upgrades worked as expected in Spain and the team at track and back at the factory continue to work incredibly hard to optimize the car,” he added. “It will be interesting to see how the new regulation cars run on the tight streets.

“The circuit really puts the drivers to the test with very little margin of error so the likelihood of safety cars is a lot higher, meaning there are lots of different strategy options we can look at for qualifying and the race.

“Let’s get out there and give everything we’ve got!” the German concluded.

Use one word to describe this view. 👇 pic.twitter.com/g8x8qCr374